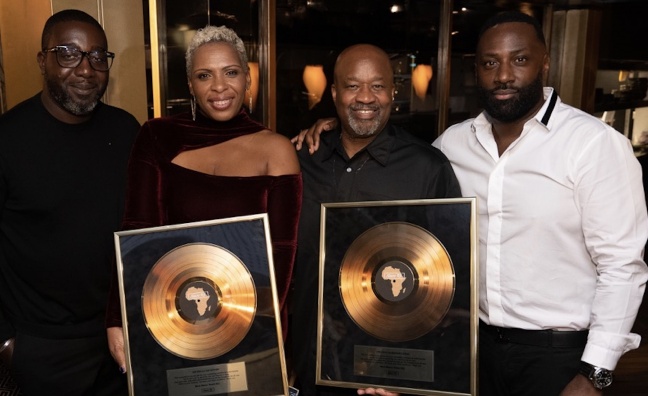 Michelle Escoffery and Trenton Harrison-Lewis were honoured at the second annual Since ‘93 Black History Month dinner in London this week.

Aikins and Bleau were joined by Since ‘93’s Chloé Ameh.

Last year, the dinner honoured the work of Jackie Davidson and Darcus Beese, with Ivor Novello-winning singer and songwriter Escoffery and Harrison-Lewis, SVP, Warner Music Group and ADA being celebrated this year.

Escoffery sits on the board of directors for PRS For Music and the board of trustees for PRS Foundation. Harrison-Lewis, meanwhile, began his career in 1987 working with We Papa Girl Rappers before becoming MD of Rush Management Europe, working with the likes of Run DMC, LL Cool J, De La Soul, Beastie Boys, Eric B and Rakim, Big Daddy Kane, Public Enemy and A Tribe Called Quest. He later joined Metropolis Music Management, where he worked with Amy Winehouse. He has recently co-managed Giggs, Ghetts, Sneakbo, Jesse James Solomon, and DJ Target.

Riki Bleau, co-president of Since '93, said: “At Since ’93 we pride ourselves on investing in and promoting Black British music, lifestyle and culture across the globe. We can do this because of those who have paved the way before us. Michelle and Trenton are two inspirational figures who have enriched our industry at every level. It is our privilege to celebrate their careers with our peers at our second annual Black History Month dinner. We started the dinner to honour our legends and share their career journeys with the next generation of young executives and contributors to the culture.”

Glyn Aikins, co-president of Since '93, said: “Tonight, we celebrate two legends who were inspirational to me personally. I heard about Trenton and his work with Lyor Cohen years before I actually met him, and I never knew such a thing was possible in the UK.  With Michelle, I first met her when she was a member of the R&B group Truce, shortly before I got my first job working in PR. The label Truce was signed to were among the first clients I worked with back then. The whole point of the evening is to celebrate individuals like Michelle and Trenton, whose journey, stories and contributions paved the way for us to be able to operate in the music business today.”