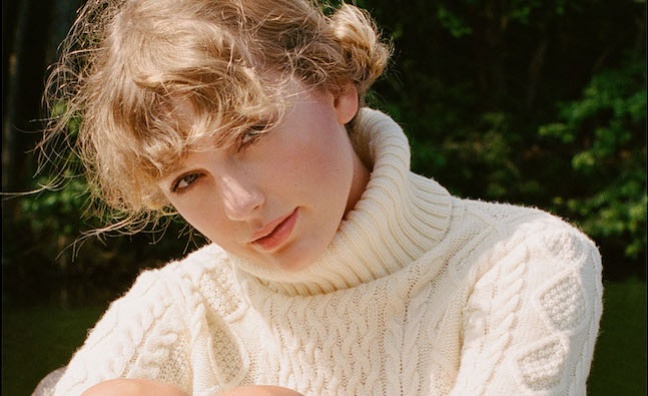 Taylor Swift has brought forward the release of the CD edition of her new album Folklore by three days in the UK.

The digital edition of the album dropped last month and debuted at No.1 on Friday (July 31) with sales of 37,060. The album also had a record-breaking reach around the world.

However, Swift faces a strong challenge for this week’s No.1 from Fontaines DC, who opened well out in front with sophomore album A Hero’s Death in the early Midweek Sales flash. The Irish band, who are signed to Partisan Records, were already approaching 15,000 sales at the beginning of the week, almost 10,000 copies ahead of their nearest rival.

In a surprise move, though, Swift’s UK label, EMI, has brought forward the CD release of Folklore by three days to August 4. Customer D2C pre-orders have started to ship, while some copies have reached stores.

The Official Charts Company confirmed that shipments of Folkore pre-orders this week will be eligible for the current chart week, along with sales in stores. That suddenly gives Swift an immediate physical boost in her battle to retain the No.1 position, as she will no longer be relying on streaming and downloads to catch Fontaines DC.

Physical sales for Tuesday (August 4) have already been added to Swift’s tally for this chart week, based on the latest sales flash.

Released with just 24 hours’ notice on DSPs, Folklore’s physical editions were always going to lag behind the digital release by some weeks. Swift’s official UK web store still lists an August 7 release date for the CD, followed by the cassette edition on September 18 and the double vinyl on November 27.

In an exclusive Music Week interview, EMI MD Clive Cawley said that the label would be looking to build on the week one success.

“Having delivered what I and many, many people believe to be the most defining album of Taylor’s career, our only plan is to do it the greatest service we can,” said Cawley. “No stone will be left unturned, no idea [will be] too weird to at least be considered, the beauty of the record – Exile is on endless repeat for me – means Taylor’s done her part, and we now need to take it as far and wide as we can. She’s a one-of-a-kind artist for everyone, and it’s just an honour to be along for the ride.”