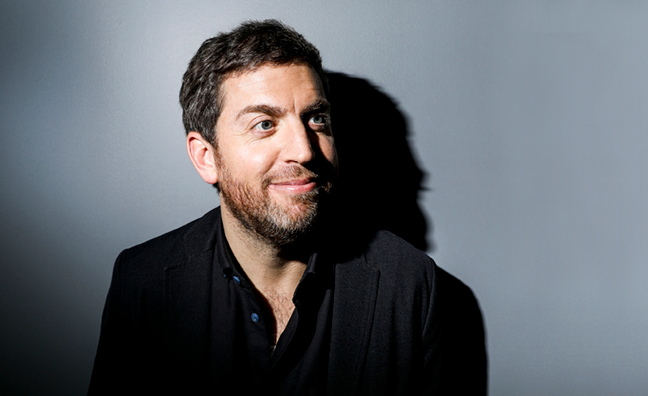 At the Music Week Awards 2018, Max Lousada became one of the youngest ever winners of the prestigious Strat. It is, of course, a very special award – one presented to someone for their outstanding contribution to the music business. You can read what Lousada had to say in his acceptance speech, but here a host of top execs and artists who know him best tell us what they most admire about Warner Music Group’s CEO, recorded music, and why he deserves the recognition…

“My earliest memories of Max were those heady days at Atlantic circa 2004. We first worked together on James Blunt when he exploded with You’re Beautiful. It was an exciting time for everyone involved. I remember going to Max’s office, more like a flat than an office, with lots of mood boards for bands he was trying to sign. Those mood boards said a lot about Max. He always cared about the finer creative details. He enjoyed the process of breaking an artist. And he understood it. He’s a music man, he understands artists and has such a lovely manner about him. He’s one of those special people. If you don’t like Max, you don’t like life!”
Barbara Charone, founder, MBC PR

“Max is a very interesting character, because he’s so great at the business side of music, but so horrendously great at the A&R side as well, which is very difficult to do. He has weird strategy things that he’ll just come out with off the cuff, and they’ll be the most genius thing in the world. Max is definitely someone that I go to for advice very often, and his advice is always spot on.”
Ed Sheeran, artist

“Many congratulations to Max on being honoured with this prestigious award. It’s deserved recognition of just how much he has done to support artists and promote the success of recorded music, whilst it also pays tribute to an absolutely stellar year for Warner Music under his direction.”
Geoff Taylor, chief executive BPI & BRIT Awards

“Max Lousada has been instrumental in the worldwide success of Ed Sheeran. He has got a great feel in the sense that, not only has he got great ears and he’s a great A&R music man, he’s also very savvy business-wise. It’s been an astronomical rise for him. Working with him and seeing how he’s matured, he’s got to be one of the top few executives anywhere in the world.”
Michael Gudinski, founder and chairman, Mushroom Group

“Max is awesome and has some great ears. I love talking music with him every time I see him.”
Charlie Puth, artist

“Max always supports the artist’s dreams, he always support their vision, he always lets them go wherever they want to go, and yet at the same time, he steers one of the biggest companies in the music business today.”
Stuart Price, artist/producer

“Max, the highest honour the magazine could bestow upon you, and at 22 years old – so young to be receiving it! You’re a great man, and you’re truly unbelievable with artists. I’m so proud to have been one of your artists, and to have a great future in working with you. Love you.”
Michael Bublé, artist

“I’ve known Max a very long time. I first met him at Rawkus Records in New York where we struck up a friendship and we share a lot of the same tastes in music. If I had to describe him I would say he has this youthful exuberance and excitement about music and artists, but a very mature brain in terms of seeing the bigger picture and embracing new technology and media. It’s a pleasure to work with him with a number of our acts that he has on the roster like Ed Sheeran, Clean Bandit and Anne-Marie. He’s achieved so much and is very deserving of this award. And, as we both have international roles, he also has similar amounts of jetlag to me these days.”
Guy Moot, UK managing director and president, worldwide creative, Sony/ATV Music Publishing

“Max is from a new generation of music leadership. Artists and executives both respond to his energy and ambition. People appreciate that he and his team think big, while staying focused on the details that matter.”
Sir Leonard Blavatnik, founder, Access Industries

“Max Lousada is one of the most dynamic people I have ever worked with. From the moment we started working on [Plan B’s] Strickland Banks, I knew we were in for an exciting ride. He always asks the question you don’t expect and is thinking a year ahead on how a campaign will look to an audience. He is true to an artist’s vision whilst never taking the easy option. He’s helped changed the lives of artists I represent. I consider him a friend and a mentor and could think of no one more deserving.”
Sam Eldridge, manager, UROK Management (Plan B, Liam Gallagher, Jess Glynne)

“Max is a visionary and was truly inspirational as our BRITs boss for two years. He’s brave, astute and funny.”
Maggie Crowe OBE, director of events & charities, BPI

“Congratulations to Max on this much deserved award. I first started working with him in the late 90’s - We would have been about 10 years old then of course – From back then you could see he was do driven and ambitious as you’d expect from someone who has achieved so much. What marks him above everyone else is his openness to new ideas, his willingness to collaborate and his genuine love for his team and his artists. Warners are lucky to have him, as are we in the Sheeran camp.”
Stuart Camp, manager, Grumpy Old Management (Ed Sheeran)

“Max understands music and the cultural forces behind it. He speaks truth,he understands relevance and authenticity, and that is obvious to see through his impact within the music scene. He has an effect on all those that come across him. He has a character that is just relatable and can relate, that many others just don¹t have. His expertise and passion translate into real world dedication to his clients. Having known Max for a while, it is great to be able to talk about him, not just as someone we have come to know, but as a joint force as we begin to, and ultimately, conquer this new chapter for #Merky. Max brings a quality to the music industry that is unprecedented. He understands that support and freedom go hand in hand, enabling his clients to be uncompromisingly creative. He celebrates differences, he will champion for those associated with him and this is clear to see, which is why Max is one of the good guys..”
Tobe Onwuka, manager, #Merky (Stormzy)

“I met Max when I was 14 and he came all the way to my house to hear me sing. He signed me when I was 15, and I’m now making my fourth album. For me, it’s been such a journey growing and developing as an artist, and he’s always championed and believed in me from the very beginning. If I could describe Max in three words, it would be ‘kind, inspired, and passionate’.”
Birdy, artist

“I first met Max in 2004, when I was playing in Bush Hall on the Uxbridge Road. He signed me the next day. Max, you made my dreams come true.”
James Blunt, artist

“Max is very deserving of any award because he’s helped my band sell loads of records, which in itself is a miracle, it’s incredible. He has played a very important part in our career, and for that, I’m very, very grateful.”
Mike Kerr, vocals/bass, Royal Blood

“Max Lousada was the first person I met at a major record label. We sat down for a lengthy amount of time and talked about life, music, opportunity, what it was that I wanted. I was blown away by the whole experience. I left that meeting feeling so welcomed, warmed, excited, inspired and, in that moment, I knew that was where I wanted to be. I really didn’t want to meet anyone else. He’s been nothing but supportive and inspiring, and he’s made so many things happen that I didn’t think could even be possible, even in my dreams.”
Jess Glynne, artist

“Max showed faith in me when no one else would. When the label I was signed to at the time was bought by Warners and became an imprint at Atlantic Records, I was only one of a handful of artists that Max decided to keep on from the roster. He showed faith in me, when really on paper there was no reason to, because my debut album didn’t do that well commercially. But he continued to fund my recordings, and he surrounded me with a really enthusiastic and passionate team at the label that have done everything they could to help me realise my vision. If he hadn’t done that, I wouldn’t be where I am today.”
Plan B, artist

“Max Lousada is one of those rare individuals who can see music in colour and form as well as hear it in tone and rhythm. He has an acute instinct for pairing visual artists with musicians, and consistently forges enduring audio/ visual collaborations.”
Es Devlin

You can relive all the best moments and quotes and from the 2018 Music Awards here.