Turntable talk: How the vinyl boom is continuing during lockdown three 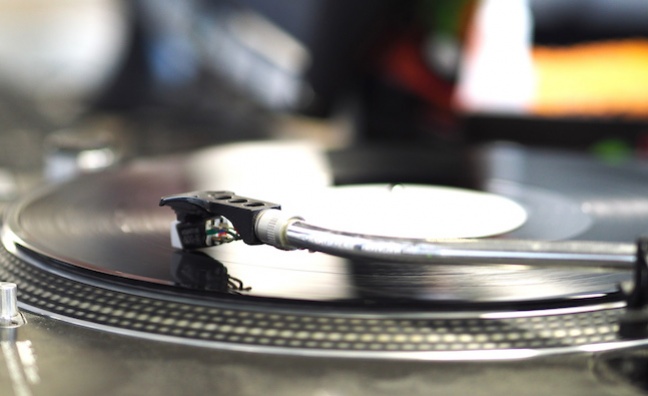 It’s official: the vinyl revival is here to stay in 2021.

While the pandemic has clearly hurt CD sales in the last year as HMV and record shops were forced to close, multiple lockdowns have not reduced vinyl sales. Far from it: according to exclusive Official Charts Company data, vinyl album sales for the year to date (chart week nine) stand at 748,077 units, an increase of 7.8% compared to the same period last year.

According to major label execs interviewed for our 2020 analysis feature in the all-new monthly Music Week, the continued growth in vinyl last year suggests an increase in the number of people now playing LPs.

“I think people were spending more time at home and investing in a turntable,” said Charles Wood, Sony Music UK’s VP of market planning and media. “Vinyl had a great year last year – it would have been even better if we were able to get more of it. Across all majors, there are relatively long lead times now to replenish stock.”

“With people being at home, vinyl is certainly one of the things they have turned to for pleasure and enjoyment,” added David Hawkes, MD of Universal Music UK’s Commercial Division. “So it doesn’t surprise me at all that the magic of vinyl has played a big part [during the pandemic].”

With people being at home, vinyl is certainly one of the things they have turned to for pleasure and enjoyment

While vinyl capacity and Brexit may impact supply and distribution from Europe, execs believe that the pandemic has further encouraged the vinyl habit for music fans.

“As the streaming market’s matured, you’re starting to see some of the consumption change,” said Derek Allen SVP, commercial at Warner Music. “It is possibly a lockdown phenomenon, with people just becoming nostalgic and listening to music they used to listen to.

“This whole ownership culture that has been discovered by the younger generation is what is driving vinyl consumption, alongside the diehards who used to have their record collection sat in the corner gathering dust. The vital thing is that it's a massive opportunity for catalogue divisions across the industry. That is partly what's driving it – people are filling all the gaps [in their collections]. These are the opportunities, and the demand is there.”

Warner Music’s Rhino label had the No.1 vinyl album last year with Fleetwood Mac’s Rumours. There were also strong new or recent releases in the Top 10 vinyl chart for the year, including Harry Styles, Kylie Minogue, AC/DC, Idles and Arctic Monkeys.

Despite the overall decline in physical when CDs are included, the format is still crucial in the No.1 race with the last eight chart-topping albums having a majority physical sale. Kings Of Leon’s new album When You See Yourself (Columbia) is proving to be another big physical seller this week.

The vinyl market will be further boosted this year by two editions of Record Store Day (June 12 and July 17), the return of Love Record Stores (September 4) for a second edition and National Album Day (October 16).

“2020 was a year unlike any other but indie record shops truly came into their own to deliver not one but three successful RSD events, all whilst navigating the restrictions and challenges of coronavirus,” said Record Store Day UK coordinator Megan Page. “Across each Drop in 2020 we saw an uplift of between 30-70% in vinyl sales year-on-year, which is astounding considering the countless challenges both the shops and general public faced.

“Splitting RSD into Drops in 2021 is as much about creating two manageable, bite-sized and safe events for store owners as it is giving them two opportunities to get music fans back through the door – especially in July when (hopefully) social distancing restrictions are finally relaxed!”

There have been big vinyl releases so far this year from Foo Fighters, Bring Me The Horizon, You Me At Six and Mogwai.

If you can't go out in the evening and go to the pub or go to a gig, then maybe you want to listen to some more records

“The kind of people that are still buying records are hardcore music fans,” said Proper Music MD Drew Hill. “The casual music fan has probably moved to become a streaming consumer. The people buying physical probably went to a lot of gigs. The fact that no one's been able to spend any money on buying a gig ticket for a year now, it means that there’s more money coming into the recorded music business.

“So maybe someone who bought one record a week or two records a month is buying twice what they were buying before, just because they've got more money to spend. Lockdown has been a disaster for the live side of the business, but the physical side has potentially been protected by the fact that those hardcore music fans have got a little bit more money and a lot more time. If you can't go out in the evening and go to the pub or go to a gig, then maybe you want to listen to some more records.”

The latest edition of the ERA Yearbook notes that vinyl has been a “truly remarkable retailing phenomenon”. With the market worth £110.1 million in 2020, the year-on-year value increase of 13.3% was above the unit increase by two percentage points. Vinyl now represents 41% of the total physical market.

With record shops allowed to open on April 12 following the easing of Covid restrictions, the second quarter could see a further vinyl boost.

Of course, indie retailers and HMV have already pivoted to online mail order sales, home delivery and click-and-collect, which has helped maintain physical’s share of the albums market (17.8% last week).

“I have quite a bit of sympathy for a lot of the physical trade and a lot of admiration in terms of how they've adapted in what must be the most difficult circumstances,” said Derek Allen. “We've seen a lot of them rapidly evolve their online offers and, miraculously, they still managed to grow – vinyl up 11.5% in the middle of a pandemic is just incredible. It’s a testament to their resilience. I think if they can get through this, then they can get through most things.”