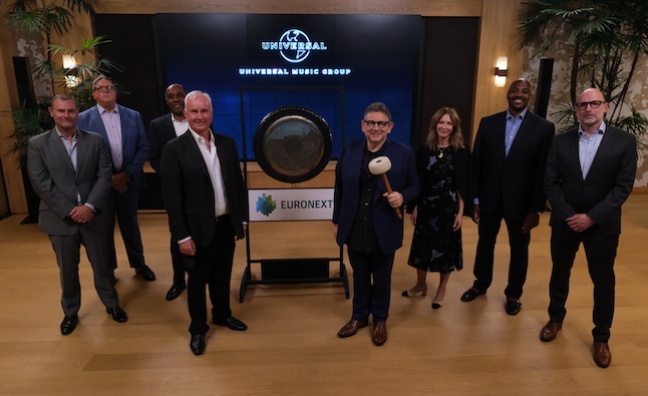 The major was valued at around €33.5 billion ahead of its debut on the EuroNext exchange in Amsterdam today (September 21). During the first hours of trading, that market valuation soared above €46bn.

Parent company Vivendi had set a reference price for the listing at €18.5 per share, according to Euronext. As well as spinning off 60% of UMG, a TenCent-led consortium has acquired 20% and Pershing Square Holdings snapped up 10%. It leaves Vivendi - no longer a parent company - with 10%.

The IPO is a triumph for CEO and chairman Sir Lucian Grainge, who revealed last week how he nearly died after contracting Covid in March 2020.

“For Universal Music Group, and the industry, there’s so much more to come, so many opportunities,” he told the Guardian. “The penetration rates of digital services in some of the largest countries haven’t yet reached those of more mature markets, so there’s plenty of headroom in those key markets.

“And then when you add fans’ growing listening through voice-controlled speakers, connected cars, social media, gaming, fitness and so on, you realise why we believe we’re just at the beginning of a new wave of music consumption. This wave is taking place on a variety of platforms – some of which were not even on the radar just a few years ago.”

Sir Lucian Grainge said: “Today’s listing marks an exciting milestone in UMG’s storied history, reflecting our position as the world’s leading music-based entertainment company and our deep commitment to our amazing artists, songwriters and partners. We offer our thanks to the team at Euronext Amsterdam for their work on this listing and look forward to a great partnership together.”