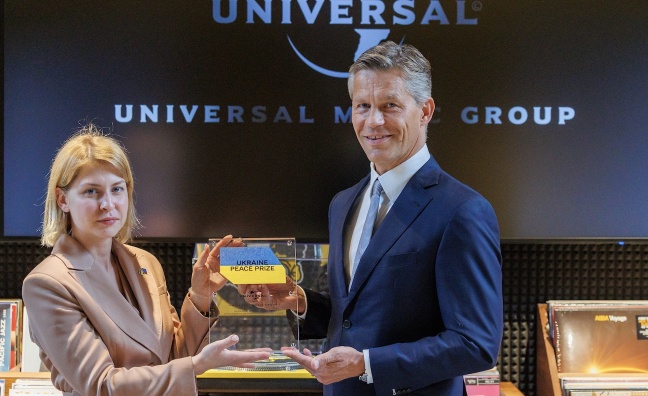 Universal Music Group has been awarded the Ukraine Peace Prize in recognition of its support for humanitarian relief in the country.

The award was presented on behalf of President Volodymyr Zelensky by the Deputy Prime Minister for European and Euro-Atlantic Integration of Ukraine, Ms Olha Stefanishyna (above, left). Frank Briegmann (right), UMG’s chairman & CEO of central Europe and Deutsche Grammophon, received the honour at a special ceremony at Universal Music Belgium’s offices in Brussels.

Stefanishyna said, “Ukraine is grateful to Universal Music for its ongoing support. The company was one of the first to support Ukraine and join the sanctions against Russia. UMG is the first music company in the world to receive such an award. Since the beginning of the full-scale invasion, Universal Music has proven that they are true friends of Ukraine and entertainment/culture sphere shouldn’t stand aside the war.”

Universal Music has proven that they are true friends of Ukraine

Briegmann said: “Throughout history, music has served as a beacon of inspiration and hope and healing – and helping to bring peace to those affected by violence. The Russian military invasion in Ukraine affects millions with urgent humanitarian needs – from food and water to shelter and clothing. Universal Music and our employees and artists are proud to support groups that are on the ground providing life-saving, humanitarian assistance to those most vulnerable.”

In recent months, Universal Music has supported a range of NGOs providing aid to refugees in Ukraine, ranging from World Central Kitchen to the International Red Cross. UMG has also supported Global Citizen’s Stand Up For Ukraine social media initiative, while Decca Classics and Deutsche Grammophon collaborated with New York’s Metropolitan Opera to release A Concert For Ukraine.

UMG star Sting, meanwhile, re-recorded his 1985 single Russians, with profits going to HelpUkraine.Center. The major has also helped raise funds through a number of concerts including Sound Of Peace in Berlin, the Polish Charity Concert and a variety of events and releases featuring the likes of Anne-Sophie Mutter, Rolando Villazón, Daniel Barenboim and more.