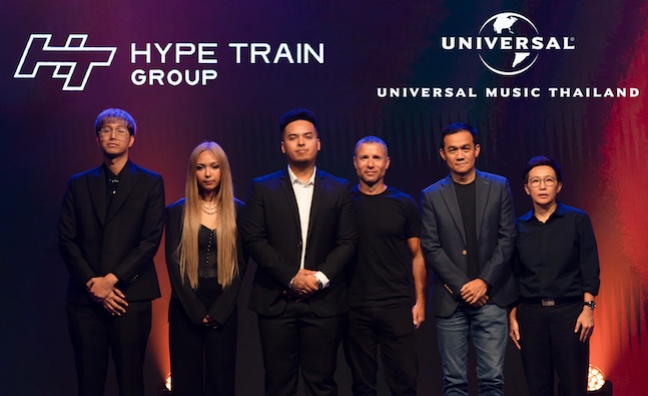 The collaboration is billed as “a springboard for Thai artists to export their creativity to music lovers around the world”.

UMG will provide global reach to help introduce artists and music to audiences worldwide, alongside Hype Train’s ability to sign talent and create hits domestically and within the region.

Hype Train Group launched in late 2020, with Universal Music Thailand as their exclusive distributor. Seedaa The Villain has become one of the most followed artists on TikTok in Thailand.

This success was followed by Sprite, who appeared on hip-hop competition TV show Show Me the Money Season 2. After the show’s conclusion, he signed with Hype Train, and his first single Baby, which launched in November 2020, now has 67 million views on YouTube.

Ton, a follow-up release by Sprite, has now gained more than 340m views on YouTube and was named YouTube’s Most Viewed Music Video in 2021 in Thailand. Ton also charted on the Billboard Global Chart and appeared on the Spotify Daily Viral chart in many countries across South East Asia, including Malaysia, Indonesia and Vietnam.

Adam Granite, EVP, market development at Universal Music Group, said: “We are excited to expand our partnership with Nino and the team at Hype Train Group, they have quickly shown themselves to be one of the most creative and innovative music companies within the region, and we look forward to working together with them and all of their amazing artists to help bring T-Pop to audiences around the world.”

Calvin Wong, CEO of Universal Music South East Asia, said: “Nino is the most exciting and successful music producer to come out from Thailand in the last five years, and we can’t wait to help his artists to reach the next level - not only within Thailand, but the rest of Asia, as well as globally. The roster of acts he has built is amazing and we look forward to further success in this partnership”.

“Partnering with UMG over the past two years has been a great success, and now that the label is home to 13 artists, it’s time for further growth,” said Krerg Chankwang (Nino) CEO of Hype Train and a top hip-producer in Thailand. “Hype Train Group’s expansion is not just good for business, but will also provide opportunities for a new generation of Thai artists. This is an important milestone to elevate the collaboration with Universal Music beyond being just a distribution partner, into a broader partnership deal that will benefit the entire Thai music community and beyond.”

Under this new arrangement, Nino will head the label and be fully responsible for all of its signings and creative output. Universal Music Group will provide label support (including servicing digital partners), new business, and global marketing and development.