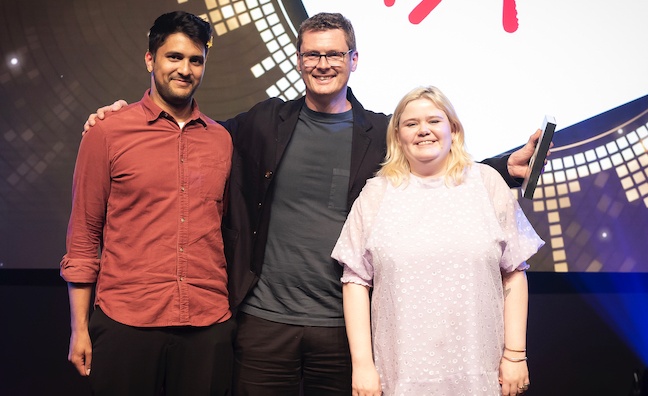 Watson (above, centre) was speaking to Music Week having picked up the Sales Team trophy at this year’s event, which took place in front of a record crowd at Battersea Evolution in London. Off the back of successful campaigns for D-Block Europe, Self Esteem and others, Virgin Music took home the award, which was won by [Integral] last year.

Watson praised the competition in the category, which saw Virgin go up against [Integral] UK, Lasgo Chrysalis Ltd, The Orchard, Proper Music Group, Republic Of Music and Sony Music UK.

“It’s a privilege to be here, there’s some amazing sales teams out there,” he said. “With the pandemic, vinyl capacity issues and the fact that there are so many ways in which you can release music these days, it’s been very challenging. There are so many different platforms and channels to dig into.”

We have a really diverse roster, we’re welcoming to all areas of music

Self Esteem’s Prioritise Pleasure (17,164 sales, OCC) made waves across the business last year, charting at No.11, while D-Block Europe’s Home Alone 2 hit No.6 and has 109,361 sales to date. Birmingham rapper M1llionz, meanwhile, hit No.10 with his debut mixtape Provisional License (15,453 sales). Watson highlighted the breadth of Virgin Music’s repertoire.

“That’s the thing about Virgin, we have a really diverse roster, we’re welcoming to all areas of music,” he said. “In the Black music space, we’re really strong, we have great [representation] in the alternative scene and we’re starting to make in-roads in the electronic music scene now as well.”

Watson said that electronic music and alternative pop are next on their hit list.

“In terms of what’s exciting from a genre perspective now, we’ve got it all coming through and it’s really exciting,” he said. “We’ve got Mall Grab and Lauran Hibberd coming up and those are both really exciting.”

In UK rap, meanwhile, the exec is looking forward to new campaigns for Arz and Rimzee, who the team believe “will be the next artist to surprise people”. Virgin Music is also working on Digga D’s chart-topping Noughty By Nature campaign.