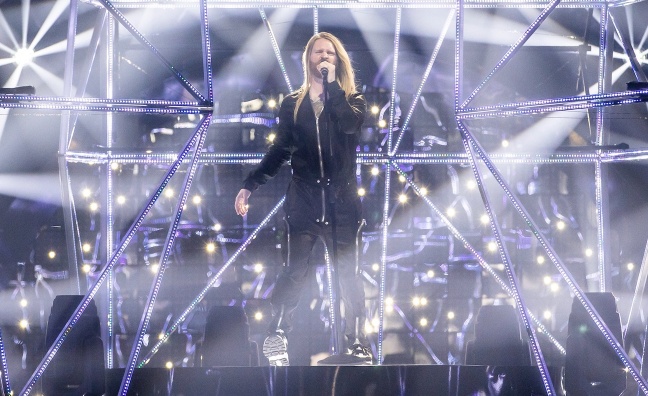 There are big hopes for Parlophone-signed Sam Ryder as the UK entry in Eurovision. Ahead of the grand final on Saturday (May 14) in Turin, the singer-songwriter is among the favourites.

Of course, the UK has not had a good run in recent years. But there’s a definite buzz around Sam Ryder, who was selected following a search by Tap Music for a British entry in 2022.

Victor Aroldoss, SVP of international marketing at Warner Music UK, has spoken to Music Week about the major’s ambitions for Ryder.

The official Eurovision Twitter feed revealed the sci-fi theme for his stage set-up during rehearsals. The song, Space Man, is a co-write by Ryder, Amy Wadge and Max Wolfgang.

But while the focus is on Eurovision this week, Parlophone and Warner Music UK have been hard at work on the artist for some time.

“Sam has been signed to Parlophone for about a year and half, if not longer,” said Victor Aroldoss. “We really start early [on international marketing and promotion] with the artists we believe in.

“Sam's already got quite a big presence in Korea. In Germany, he’s done promo and a TV show over there. We've presented him as a Warner Music UK priority developing act for the last 18 months.”

Mark Mitchell and Nick Burgess, co-presidents at Parlophone Records, revealed their hopes for Sam Ryder when he was selected for the UK’s entry.

“We are genuinely proud and excited to have our own Sam Ryder as the UK’s entry for Eurovision,” they said in a statememt. “In Sam, we are putting forward an artist with an incredible voice and a hugely infectious and unique personality. Combined with an amazing song in Space Man, we have huge confidence that he will deliver an iconic moment for the UK at this year’s show.

“Through his massive social media following we can see he already connects with fans from all over Europe. With Sam, Parlophone and Tap Music on board, and working alongside the BBC, there’s a new sense of energy and credibility around the UK’s involvement in Eurovision.”

Eurovision is an amazing opportunity for Sam Ryder

Sam Ryder has established a global presence on TikTok as the UK artist with the most followers on the platform. He built his audience through a series of cover versions that went viral via the video app, and now has 12.3 million TikTok followers.

“We believed in this artist because he had an audience, and he was developing an audience on TikTok,” said Aroldoss. “And obviously he's an amazing talent. We thought from the outset that there was an international  upside for him and future potential.”

Sam Ryder is establishing a global DSP audience with 1,157,795 monthly listeners on Spotify - expect that to soar following his performance this weekend. Space Man has more than 4.5m streams on the platform so far.

The single has registered 26,010 Official Charts Company sales so far, based on 2,556,515 streams and 3,382 downloads in the UK. That’s likely to get a significant boost following the ceremony.

For Aroldoss and his team, the global potential for Ryder is even more significant.

“What we have with the Eurovision campaign, especially with Tap Music’s involvement as well, is a really strong UK domestic campaign, as well as an artist that [global] markets have been developing for the last year,” he told Music Week. “And they have now got a story that is really potent for them. So it's a perfect storm really, as we’re trying to make the inroads that we need to do with Sam. I think Eurovision is an amazing opportunity for him.”

Aroldoss confirmed that Ryder has plans to visit multiple European markets for promotion and live performances.

“He's winning fans, he’s doing pop-up shows and promo, but he's also talking to a new audience in those markets that he's found through TikTok and through socials,” he said. “So we're talking about doing in-stores… Not that we've got anything to upsell, but we just need this audience to meet him and see him.”

The Eurovision Grand Final will be broadcast on BBC One and BBC iPlayer plus via BBC Radio 2 and BBC Sounds on Saturday, May 14 from 8pm.