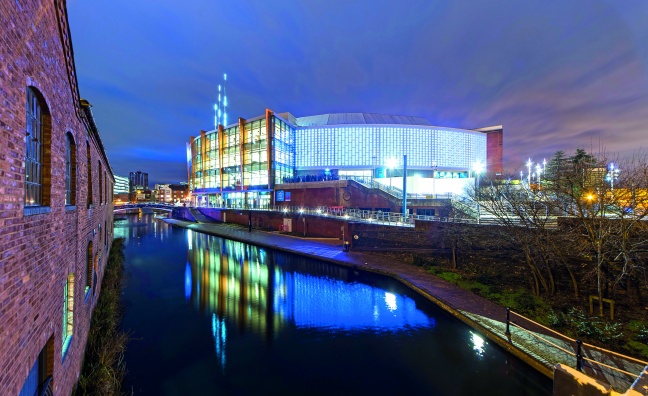 NEC Group's Guy Dunstan has told Music Week the arena sector is still in the dark as to when it will be able to reopen after the Covid-19 shutdown.

Yesterday, more than 1,500 artists including Ed Sheeran, Coldplay, Dua Lipa, The Rolling Stones, Rita Ora, Sam Smith, Paul McCartney and Liam Gallagher, and thousands of crew and venues issued an urgent plea for support from the UK government. The #LetTheMusicPlay appeal was made in a letter to the Secretary of State for Digital, Culture, Media and Sport, Oliver Dowden.

And Dunstan, NEC Group's director of arenas, said the Birmingham-based company's Arena Birmingham and Resorts World Arena would only be able to operate at 30-40% of their capacity - even under a one metre social distancing rule.

"It's very difficult to put any dates against when we might get back to normality," said Dunstan. "When this all started in March we all thought that we would get through the summer and be back to business in September - and here we are now looking at potentially the rest of this calendar year being severely impacted.

"The other aspect of it is maintaining social distancing through the operation. From queuing, concourse management, toilets, food and beverage, egress arrangements, it's very, very difficult to maintain that through the customer journey.

"You're also looking at increased costs to manage that process from start to finish and it just isn't conducive to the model we have in the arena market. Likewise, for promoters and artists, the economics for them to play on restricted capacities just don't work."

He added: “We could be given the green light tomorrow, but our diary is pretty barren between now and the end of the year. So much business has been pushed back into the next calendar year, because promoters want certainty."

For promoters and artists, the economics for them to play on restricted capacities just don't work

The Music Managers Forum (MMF) previously warned the UK business was being left to “sink or swim” in the absence of government intervention. And former National Arenas Association chair Dunstan admitted he was concerned the predicament facing the arena market was being overlooked until very recently.

"We contacted DCMS a couple of weeks ago to say we feel as though other sectors were getting a lot more attention than ourselves," he said. "We put forward a paper with the guidance proposal to them, and they have actually now started acknowledging that they've got to focus on [the arena] sector more closely.

"There has been a lot of focus on theatres and on grassroots venues and they've been very proactive and done a good job in terms of getting their message across. We've been pushing our message but we're starting to get that attention now that has been needed, so I feel we're moving in the right direction."

In the meantime, the Resorts World Arena is being used as one of the venues for Live Nation's Utilita Live From The Drive-In socially distanced concert series. Acts including Beverley Knight, Tom Grennan, Dizzee Rascal, Kaiser Chiefs, The Streets, Tony Hadley and Jack Savoretti will each headline nights in one of the venue's car parks over the summer, with capacity for 300 to 500 vehicles per night.

“It’s not going to be a huge money-spinner, but clearly it’s the right thing for us to do," said Dunstan. "We’ve been able to [utilise] our infrastructure and services in a period where it is very difficult to book events of any scale. Live At The Drive-In gives us an opportunity to try something a bit different and at least do some sort of business over the summer period. And who knows? It may be that it gives us a niche opportunity in the future.

"We don't sit still and wallow in self pity. We're always looking at ways that we can innovate and are currently looking at what options there are for us to do some level of business until we get back to being able to operate at full capacity."