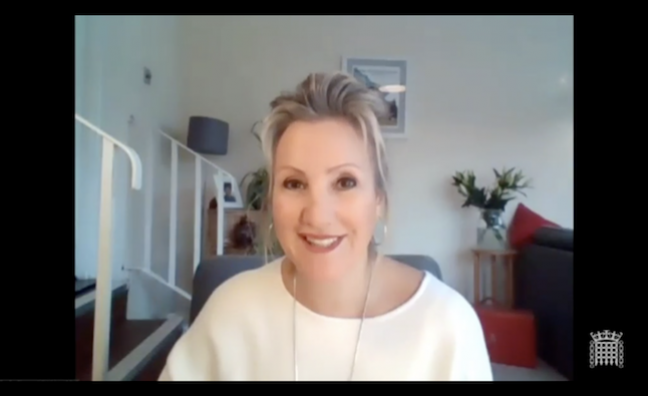 The DCMS Committee has been busy looking into the economics of streaming in recent weeks. But for its latest session, EU touring was on the agenda as MPs called in Caroline Dinenage, Minister Of State for Digital and Culture, to face questions on visa-free access for touring artists and others in the creative industries.

Music Week has covered the fall-out for the music industry from the UK’s trade deal with the EU, as it emerged that there was no provision for British artists and musicians touring Europe. While a reciprocal deal would have helped the creative industries in both the UK and EU, a blame game has overshadowed any possible solutions in recent weeks.

During a parliamentary debate last week, Dinenage memorably said that an EU proposal on visa-free touring during those negotiations was “not consistent with Brexit”. She avoided the use of “Brexit” this time, though it was clear that the deal is final and cannot be revisited.

“I think an EU-wide solution is going to be very complicated,” Dinenage told MPs as she faced questions about the issues facing artists and musicians.

“I’m not saying it's not possible to continue talking to the EU. As I've said, my door remains open – if they want to come in and reopen that conversation on another level, of course, I'm very happy to do that.”

Dinenage said the government’s focus has been on a system of work permits rather than visas, which was why an EU proposal during the negotiations last year was not acceptable to the British delegation (DMCS was not represented in that negotiation).

“When you look at what we would had to have done in exchange, the wider package would have required a permanent short stay visa waiver for all current and future EU citizens, and that's something that no other G7 country’s ever signed off on,” said Dinenage during the virtual session. “We would have needed to have a greater deal of certainty about that wording, and the package should have been significantly better [for us] to have taken those steps.”

She also noted the EU “conditions on visa waivers that weren't acceptable to the Home Office”.

During the session, there was a suggestion from other speakers and MPs that Covid offered a window of opportunity of a few months to come up with a reciprocal arrangement ahead of the return of live music. There was also talk of the “soft power” of UK music globally and the importance of the creative industries – a £111 billion sector.

But there are concerns that the UK-EU Trade and Cooperation Agreement can only be reviewed every five years under the terms of the deal.

Caroline Dinenage confirmed that the deal cannot be revisited, and she suggested that bilateral arrangements with individual countries were the most realistic route. As EU countries each have their own approaches to visas and permits for non-members’ citizens, Dinenage said this was the best area to focus on improvements for touring artists, as well as providing guidance on the various systems.

The Minister also singled out “problematic” countries such as Spain, where there is more cost and bureaucracy for UK artists, compared to the more frictionless approach by France.

“So we're very keen to keep communicating with member states to talk through all of that, and if there was the opportunity for bilateral agreements on this, then we'd be very happy to discuss that.”

Acknowledging the challenges of bilateral agreements within the framework of international law, Dinenage suggested a more immediate solution was simply for some EU countries to improve their visa systems.

“We want to make sure that any restrictions that are in place are applied as effectively, as efficiently and as smoothly as possible,” she told MPs. “As you've heard from your evidence, that's not been the case in some of the member states. It’s very early days, I would like to think that those are teething problems, but we need to make sure that does not perpetuate and that where these systems are in place, they are as streamlined and as efficient and as effective as possible.

DCMS will work with colleagues from the Department for International Trade and the Foreign & Commonwealth Office.

“We really want to use all the diplomatic tools at our disposal to try and improve the situation, because we know this is a sector that is absolutely vital for our economy,” said Dinenage. “But more than that, it is part of what makes us British – they are fundamentally one of the biggest calling cards for our country.

“Of course, they're still able to tour and perform in the EU and vice versa, but we understand that there are huge concerns for the creative and cultural sectors to do this. We are absolutely committed to supporting them to get to grips with the changes to the systems and processes, and to facilitate those systems and processes to put in place the guidance and the support that they need to move forward, and to continue to perpetuate that engagement with EU counterparts.”

As it became clear that DCMS has only looked at solutions since the trade deal in January (in part because it was not allowed to enter bilateral talks with individual countries), committee chair Julian Knight MP suggested the department was part of the problem as other parts of government were actually responsible for the crucial areas under discussion.

“It is quite unbelievable,” he said. “Fishing, however important it is for those particular communities, it’s a tiny part of the UK economy. This [the creative industries], which is a world-leading part of the economy, has basically been left to endure a no-deal Brexit.”

While Dinenage reiterated that the “door was open” for the EU to revisit the issue, MPs made the point that she should be pursuing it urgently on behalf of touring artists.

“It's not a zero-sum game here,” she said. “There's going to be economic disadvantage for the EU to not have our amazing world-class performing artists maybe deciding not to tour. That would be a massive economic impact for them as well to lose out on some of the specialities of our creative professionals.”

However, the Culture Minister then contradicted that suggestion by confirming that those superstar acts would be unlikely to be affected.

“We know that the major impact here is going to be felt by the young professionals starting up bands, those that are trying to build their name in the performing industries,” she said. “Because, as Elton John said in all the work that he's done on this, it's not a problem for an artist of his reputation and scale to be able to go off touring. It's for those who are really trying to establish themselves for whom touring is a really important part of what they do.”

Dinenage confirmed that there were currently no discussions with counterparts in EU states. A working group on the issue has started work on specific issues with certain countries and how to address them.

In his evidence, Alastair Jones, deputy director, Creative and Cultural Touring Project, DCMS, said there had been a “lack of appetite on the EU’s side to really engage and make a workable solution” in the original negotiation.

Ahead of any bilateral talks, he outlined the “generous” UK system for EU touring artists and musicians, under the Creative and Sporting Visa (T5) options.

We want to make sure that any restrictions in place are applied as effectively, efficiently and smoothly as possible

There was some good news for musicians who carry their own instruments as hand luggage, which Dinenage confirmed would not be subject to carnets. But she conceded that post-Brexit cabotage rules are an issue for haulage companies working with the touring industry, and that it was being investigated by the Department of Transport.

“We will use every power in our arsenal to engage with bilateral partners, to find ways to make life easier for those in the creative industries to be able to continue to work and tour in countries across the EU,” said Dinenage.

But she admitted that the EU touring row has become an unwieldy problem for the government.

“There are certainly a lot of obstacles to overcome, I’ll give you that,” she told MP Steve Brine. “And quite a lot of sleepless nights across my department at the moment.”

Artists, musicians and their support staff know that feeling, too.