'Concerts are an extremely important part of our business model': Q&A with Wembley Stadium's James Taylor 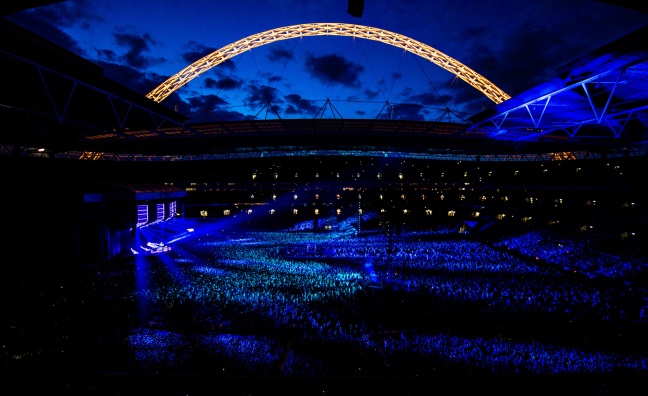 Wembley Stadium is preparing for a record summer as the UK's stadium rock (and pop) boom shows no sign of letting up.

What are your expectations for Wembley's 2019 concerts season?

"At the time of writing, we have 10 shows announced and a further three to be confirmed, so we are absolutely delighted with what we have already secured for 2019. It will be a record number of shows in a year and the highest number of acts we’ve ever had at Wembley Stadium connected by EE. Overall, we are really pleased with the strong mix of current pop acts and legends of the music world. I have to give the promoters credit for working collaboratively to maximise the limited number of weekends available during the summer concert period. Looking at the current landscape of stadium shows in the UK, our venue is the place to be next summer. The Spice Girls reunion, in particular, has seen a huge amount of interest and it was also great to see Fleetwood Mac secure a second night. The final two events, which consist of three shows in total, will be announced soon to tie up our summer 2019 season."

Why do you think there were so many UK stadium shows in 2018?

"Put simply, a number of huge multi-night acts were touring, which resulted in a strong year for UK stadium shows. The touring cycle can throw up quiet years, with limited numbers of multi-night acts, but busier years often follow and we need to be in a position to secure the best acts we possibly can when they do. Concerts are an extremely important part of our business model and we would love to host every major touring act. However, Wembley is first and foremost a football stadium, so we have to make the most of the short window available to us. In 2018 we were limited to just three weekends but welcomed two huge pop acts in Ed Sheeran and Taylor Swift for four and two nights respectively, as well as the Capital Summertime Ball, which provided some amazing Wembley moments."

How does this compare with recent years?

"2018 was a good year for multi-night acts and stronger than many we have seen recently. However, I have no doubt we will see another strong year for multi-night stadium shows in the near future. There are still a number of artists out there capable of delivering multiple nights across multiple weekends, so let’s see what happens. From our perspective, we are delighted to have secured all of the major multi-night stadium touring acts for 2019 and fit them in by working collaboratively with the promoters. We are already looking ahead to concert seasons over the next few years."

Is this something you expect to continue in future years or is it more a reflection on the calibre of acts touring at present?

"There’s huge demand for stadium shows and the productions are becoming increasingly impressive, which draws fans back year after year to ensure they don’t miss out on the hottest gigs. I don’t see this slowing down in the foreseeable future and expect a strong number of the biggest acts performing currently to continue as stadium acts for years to come. Fans sharing the experiences online are playing a huge part in showcasing those incredible moments people fear missing out on. For example, last year Taylor Swift brought on Robbie Williams and Ed Sheeran was joined by Stormzy, which both created a real buzz on social media."

How equipped is the UK market to sustain such a high number of big shows?

"Well, there are more and more stadiums capable of hosting concerts now with either new or modified stadiums such as Anfield or the new Spurs ground coming onto the market. So, there are plenty of venues available and we at Wembley need to make sure we still remain the biggest and best venue for artists and promoters. Our 2019 line up suggests we are doing well in that respect."

Do you have any concerns over the number of newer acts coming through at stadium level?

"It doesn’t concern me at the moment as I still see a huge number of established acts capable of filling Wembley and stadiums across the country. Whilst I understand the concern regarding new acts, I believe there are a number of artists perhaps on the cusp of being ready for stadium tours and to complement those already established. I see the likes of Shawn Mendes and Sam Smith performing multiple arena shows across the world, so hopefully 2019 sees some of these artists look to work towards a stadium-level event."