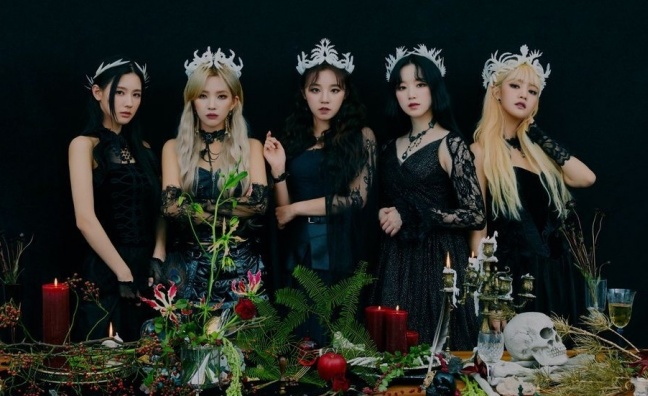 Europe’s biggest ever K-pop festival, Kpop.Flex, is adding a second day at Deutsche Bank Park Stadium, Frankfurt. The first date sold out the entirety of its 44,000 tickets.

Organised by K-Pop Europa in partnership with PK Events and Korean broadcaster SBS Television Network, the festival is the first step in a five-year programme catering to K-pop’s explosion in popularity across Europe.

Since its unveiling, Kpop.Flex has prompted fan excitement across social media in anticipation of the K-pop event in Germany. The US audience for K-pop acts, including BTS who scored a No.1 Hot 100 single, has grown rapidly in recent years, and now there is increasing demand globally.

The new Sunday, May, 15 date sees the festival enlist groups (G)I-dle (pictured), AB6IX and IVE, who are set to perform on both days. Boy group Oneus will play exclusively on Sunday, alongside Monsta X.

The full line-up of K-pop stars is also finalised for Saturday, May 14, 2022. Solo artist Kai, of Exo & Super M, and boy band AB6IX will join (G)I-dle, NCT Dream, Enhypen, Mamamoo and IVE in kicking off the festival. Saturday’s acts boast a combined social media following of over 48.3 million, while those confirmed so far for Sunday count over 17.5 million.

Korean broadcaster SBS will film the festival and create a made-for-TV edit, for screening in Korea after the event.

The Kpop.Flex event also promises a “vibrant fan-fest celebrating Korean culture” in the grounds of the Deutsche Bank Park stadium. Organisers aim to establish the festival as a hub for Europe’s K-pop community.

This is only the beginning for K-Pop Europa

On the addition of a second date, Deutsche Bank Park MD Patrik Meyer said: “The attraction of the Kpop.Flex festival is enormous for fans, as the K-Pop wave truly arrives in Europe. The fact that we can offer the fans a second festival day in our modern stadium in Frankfurt, at the heart of Europe, continues to increase the anticipation.”

Deutsche Bank Park Stadium, Frankfurt has already sold out three dates for Coldplay and two for Ed Sheeran later in the year.

David Ciclitira, chairman of Live Company Group, added: “We’ve been wowed by the response Kpop.Flex has had from fans so far, and are delighted to be able to extend the event into a full weekend festival. This is only the beginning for K-Pop Europa, and we’re eager to bring even more of the genre’s biggest names to perform for European fans in future.”

Andreas Waschk, Explorado Group’s chairman of the board, said: “K-pop is a fantastic and very enriching part of the world’s music. We are really glad to be a part of implementing it in the hearts of Europe and its people. We look forward to a wonderful weekend in May and a great experience for everyone.”

Saturday ticket holders will have access to a 48-hour presale for the second day, which entitles the buyer to a 10% discount, going live February 15 at 10am CET. General release then begins at 10am CET on February 17.

K-Pop Europa is a partnership between Live Company Group and Explorado Group. Following strong sales for the inaugural Kpop.Flex, K-Pop Europa plans to expand its brand with new dates and locations over the coming year.