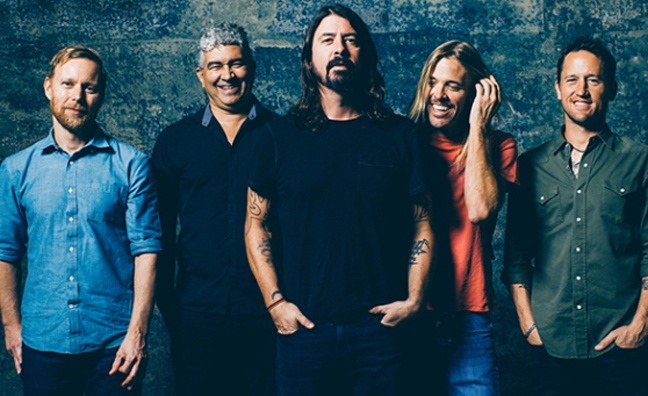 Foo Fighters have filed a lawsuit in Los Angeles against Lloyd's of London, several insurance companies and a UK insurance broker, following the cancellation of several shows on their 2015 world tour.

The band alleges they have "failed to pay amounts that even they appear to recognise are due and owing" on insurance claims, reports Billboard.

They postponed seven shows after Dave Grohl broke his leg last June. He went on to perform 53 shows from a "throne", while on crutches. Central to their complaint is that three of those 53 shows were intended to be "make-up shows" for fans.

"After paying certain amounts owed under the Cancellation Policy for four of the cancelled performances, [the insurers] began searching for ways to limit their payment obligations on the other three performances, including the two Wembley Stadium shows, which represented the largest potential gross income," reads the complaint.

"[Insurance broker] Robertson Taylor failed to adequately advise the band of the potential impact these additional shows could have on their claim for coverage... Specifically, Robertson Taylor failed to adequately inform the band that, if it decided to add these shows to the tour, the London Market Insurers would attempt to recharacterise the cancelled Wembley Stadium and BT Murrayfield Stadium performances as being 'rescheduled', which would dramatically reduce the amount those insurers would owe in a claim."

The second part of the complaint deals with four shows cancelled in the wake of the Paris terrorist attacks last November. "Foo Fighters reasonably expected that the Terrorism Policy would provide them coverage for the four November 2015 performances, which were necessarily cancelled as a direct result of terrorism," reads the complaint.

"[The insurers]... have not provided Foo Fighters with any indication that they dispute coverage for the cancellation of the Paris, France and Lyon, France performances. To date, seven months later, however, London Market Insurers have not paid or offered to pay a single penny of Foo Fighters’ terrorism coverage claim."

Both Lloyd's and Robertson Taylor did not respond to requests for comment.