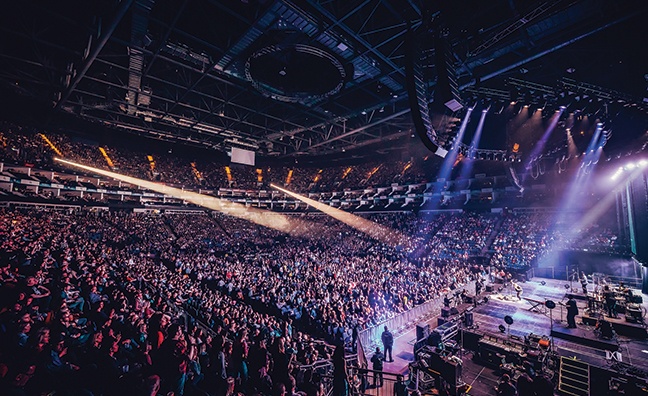 Hands up who’s missing live music? With most gigs – bar the odd experiment – still ruled out for the foreseeable future, everyone who works in the music business is missing the grassroots shows and arena spectaculars that are the lifeblood of the industry.

So Music Week decided to take matters into its own hands, and quiz the industry’s finest on the best gig they ever saw. A selection of big names – including Dua Lipa, Matthew Healy, Tom Watson, Emma Banks and Keith Harris – can be found in the current issue of Music Week, available now, which also features the inside story of the Save Our Venues campaign.

And until those venues are saved, and we can all return to the moshpit/standing at the back with our arms folded, here come a load more huge industry names with tales of the greatest shows…

PRINCE
“My favourite show ever came on the back of my favourite performance ever. Prince had changed his name to a symbol and the band that I was in, D’Influence, were supporting him at Wembley Stadium [in 1993]. We had an amazing gig but that's not the gig I'm writing about! Prince had an aftershow party that he invited us all to at The Forum, Kentish Town. He had hired it for one of his infamous post-show jams – he played behind a curtain for a while with his band and we all thought it was a CD playing some great new undiscovered music over the system. Then, slowly, the curtain came up and revealed him and his band jamming out some supremely tight future funk. I remember thinking, ‘I will never see this again’, so lapped up every minute of it.”
KWAME KWATEN, FOUNDER, FEROCIOUS TALENT/VICE-CHAIR, MMF

BLONDIE
“I saw Blondie at Brixton Academy in 2017 and that was a brilliant gig. I wasn’t quite sure what it would be like, obviously they have been around for a while. But they were absolutely fantastic and I’m really glad I went.”
OLGA FITZROY, EXECUTIVE DIRECTOR, MUSIC PRODUCERS GUILD

THE JESUS AND MARY CHAIN
“I promoted this show at Ziggy’s in 1985. It was a 100 capacity club off Union Street in Plymouth. The hype surrounding the Mary Chain at this point had the city fathers trying to shut the gig down as the tickets flew out of the shops. Alan McGee came down and, as we stood outside the venue before the show, watching the cops watching the kids, he turned to me and said, ‘Barrett, what the fuck are you doing in Plymouth? Do you want to come and work for me at Creation?’”
JEFF BARRETT, FOUNDER, HEAVENLY RECORDINGS

DAVID BOWIE/U2
"I've been to a few Bowie gigs which were amazing! And I went to a U2 gig at Pier 84 in New York [in 1983], and they were absolutely great, but I went deaf for about a month after that gig and I couldn't work! I don't see why they had to play that loud!"
TONY VISCONTI, PRODUCER

JON BELLION
“Jon Bellion at The Roundhouse last October was amazing. I love Jon’s band and how free and skilled they are, with him directing it all musically. It was quite inspiring.”
GRIFF

DEXYS MIDNIGHT RUNNERS
“It was at the Old Vic in 1981. I’ve still got the poster on the wall of my office and it was just fantastic. It’s always resonated. I’d just come to London, I was there as a fan with my girlfriend at the time and we were completely blown away. I saw them the next time they’d played, just after Come On Eileen had been a hit, and it was a very different audience, but that gig was something. It was the tour when they said they weren’t a rock band, ‘We’re not playing rock venues, we’re going to play theatres, we don’t want people jumping around getting drunk, we want them sat down and listening’. I did it too. If Kevin Rowland tells you to sit down and listen, you sit down and listen!”
TONY CREAN, MANAGER, FLEET RIVER MANAGEMENT

GARAGE CLASSICAL
"Garage Classical at the Royal Albert Hall in October last year was a personal favourite. I grew up listening to garage, so hearing all of the biggest tracks played by the Ignition Orchestra was incredible. The huge line-up of guests too made it feel extra special – Craig David, So Solid Crew, Sugababes, MC Creed, Lifford… There were so many standout moments. It was an amazing nostalgic night that took me back to my teenage years!"
TASHA DEMI, CO-FOUNDER, TWENTY:TWO AGENCY

GODSPEED YOU! BLACK EMPEROR
“It was at the Hackney Ocean in roughly 2002. I was and am a gigantic Godspeed fan and that was the best time I ever saw them – they blew my fucking mind.”
FRANK TURNER, ARTIST

ARCADE FIRE – O2 ACADEMY, BRIXTON
“Arcade Fire at Brixton Academy in 2007. I think it was the first time they played there, just after Neon Bible. I’d seen them before in a small venue and that was definitely an amazing gig, but I remember the feeling of walking into Brixton Academy when they were just starting one of their big tunes… Every time I walk into a gig I want to recreate that feeling of walking in to hear Arcade Fire striking up. I’m nearly always disappointed that every gig doesn’t feel as good as that one, even though I’ve been to tons of great gigs. There was just something about that moment, where I was in my life, who I was with and how it felt, it was really special.”
JAMIE CULLUM

THE 1975
“I’m going to be so incestuous and say my [Dirty Hit] labelmates The 1975 at The 02 in February this year. Their visuals are absolutely unmatched, this set was amazing, very thought through and very moving. Matty Healy is great, he’s been really supportive of me.”
RINA SAWAYAMA

* To read the full Greatest Gigs feature, see the current issue of Music Week, available now, or click here. To make sure you can access Music Week wherever you are, sign up to our digital issue by clicking here.