Harry Styles: One Night Only - The Music Week review

Harry Styles puts his left hand over his eyes and rocks backwards on his heels, overcome as almost 5,000 voices sing Little Freak, a song that has barely been in the world for five days, back at him. “I’m not worried about where you are/Or who you will go home to” chant the crowd, “I’m just thinking about you”.

The noise is all-encompassing, and in truth Brixton Academy had become an undulating mass of strobe lights and deafening screams during Queen’s Bohemian Rhapsody, which serves as a warm-up song for the London edition of Styles’ One Night Only special. Tonight, he plays every track from Harry’s House - which is currently rocketing its way to a No.1 finish - in order, then reappears for a selection of what, now he’s three albums in, can be legitimately considered as the hits.

Tonight is all about emotion. Styles makes frequent reference to how overwhelmed he’s feeling to be back home and the audience is similarly struck by the occasion. During the encore, there are two stoppages to help fans in the throng at the front. His supporters, as always, go the extra mile: we see a homemade T-shirt with the “cocaine sideboob” lyric from Keep Driving on the front, and there’s someone in a full egg costume (the breakfast favourite pops up a couple of times on Harry’s House). The vibe among the crowd - cowboy hats, glitter and several examples of nails painted the same pale green Styles has been sporting lately - is celebratory for sure, but this evening is only ever a second away from skin-prickling poignancy.

The screaming hits its maximum right before the singer walks on stage, where he stands in silhouette for a glorious moment before the band fire up Harry’s House opener Music For A Sushi Restaurant. As soon as the ‘Ba, ba, ba’ of the intro hits and drummer Sarah Jones leads the way into the verse, a bombastic tone is set. The air of intrigue that permeates much of Harry’s House is absent here, as the songs fill with vitality and adrenaline in the way that only brand new songs played live for the first time can.

Styles thrums with energy, his elastic legs cocooned in billowing white trousers, green suede Adidas on his feet and a spotty black and white top completing his rock imp get-up. It’s a wonder his chunky blue beaded necklace doesn’t snap from all the headbanging and bouncing around. Pumping his fists, making come hither gestures with both hands and blowing kisses, he’s a shimmying, hip-wiggling blur. Indeed, the only times he’s still are when he’s talking to the crowd between songs: admonishing himself for singing “cocaine, sideboob” with his mother in the room, leading a chorus of happy birthday to a 22-year-old down the front named Maddy, or reacting to a sign in the crowd and telling off an audience member’s unfaithful boyfriend (“Luke? That’s a shit name anyway”).

All of which adds a new dimension to Harry’s House, sharpening its contrasts. The most high-octane moments tonight come via the No.1 hit As It Was, which makes the room shake under the weight of jumping feet, and Daylight, which gets enjoyably lost in heavy guitars and more epic drumming from Jones, who is a star seated high above her bandmates. The bass notes at the beginning of Satellite, meanwhile, reverberate up through the floor. Little Freak, Matilda and Boyfriends - the softer moments on Harry’s House - offer up an enhanced view of Styles’ more thoughtful side here, too. 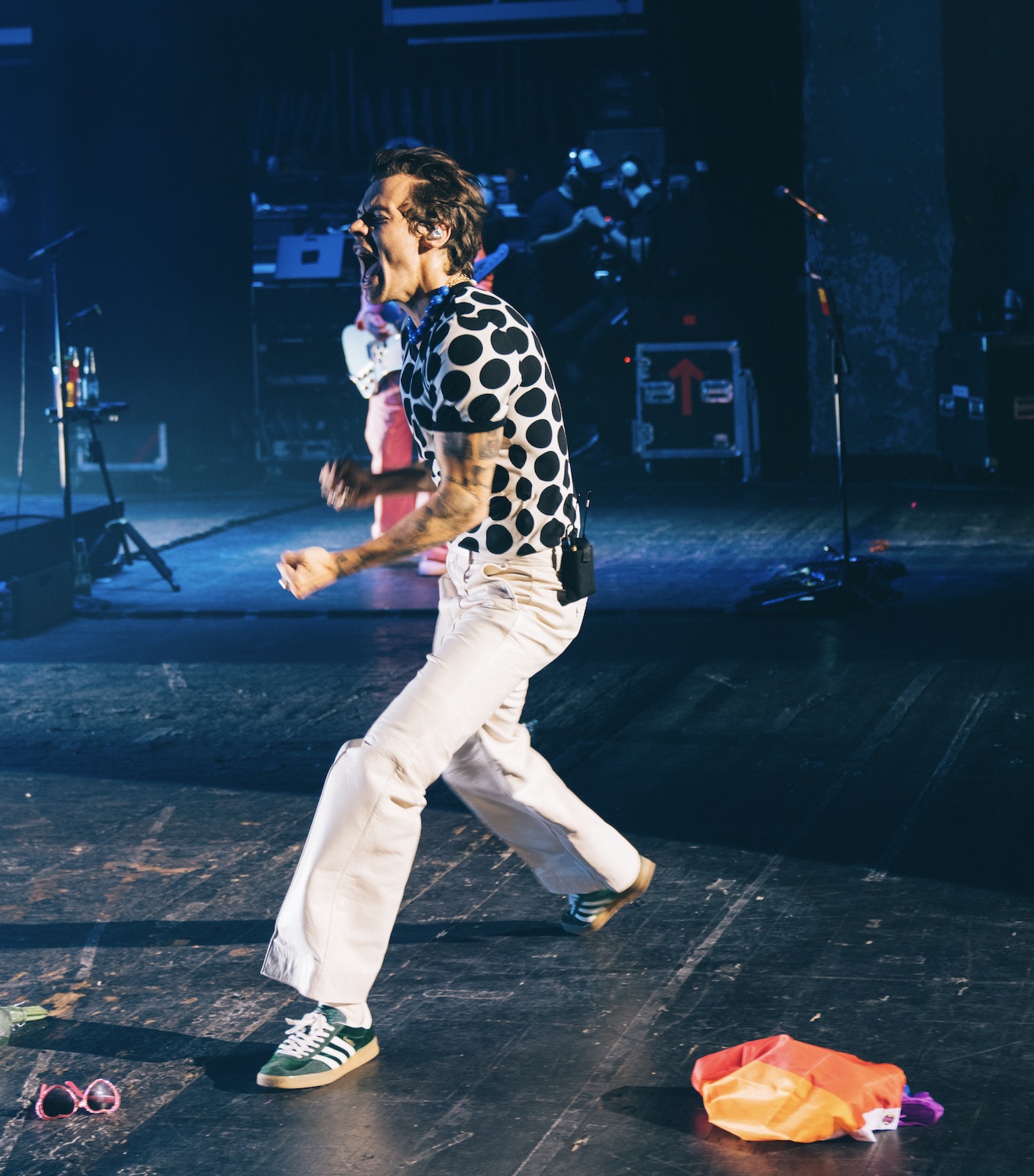 By the time Love Of My Live slides to a close, Styles is getting ready to disappear, twirling a Union Jack around his hips as he departs. Moments later, he’s back and straight into Adore You, which leads a five-song coda that includes Watermelon Sugar (“If you find yourself confused or scared, remember you can always sing along to a song about oral sex,” he says), an epic version of Sign Of The Times that is injected with drama as Styles catches a Ukrainian flag hurled up from the crowd and a cacophonous Kiwi. Styles saves his most feverish moves for the latter, bending his body into new shapes and high kicking along to its juddering riffs. And then, after a slightly hoarse goodbye, he’s gone.

As he leaves, something Styles said earlier comes to mind, the simple idea that the world needs more people being nice to each other at the moment. Clearly, he’s happy to play that role and nights like this strike a lightning bolt of joy into the heart. Maybe, then, the world needs more of Harry Styles, and with arena tour to come, that’s exactly what it’ll get.

Read our review of Harry's House here, and read our 2019 cover interview here.