'He loves breaking his own records': Ed Sheeran's live team on the world-beating ÷ tour 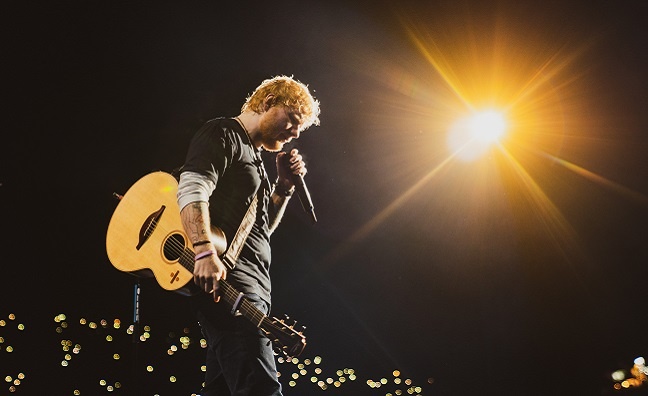 The dust is still settling on Ed Sheeran's record-breaking ÷ world tour, but the pop superstar is already being tipped to go one better next time around.

Sheeran wrapped up the mammoth 255-show run with four hometown concerts in Ipswich's Chantry Park over the Bank Holiday weekend.

There was a feeling up until recently that, because our ticket price is so reasonable, we wouldn't actually get the gross record

“You don’t set out to break records,” said CAA agent Jon Ollier, who reps the singer outside of North America. “With Ed, it’s always been about providing good value for money – that’s been a huge driving factor in why we’ve sold so many tickets and are able to do these huge shows. So there was a large feeling up until very recently that, because our ticket price is so reasonable, we wouldn’t actually get the gross record."

"We thought we might get the attendance record, but it was only really in the last year or so that we’ve started to think, ‘Hold on a second... We might actually hit the gross record here.’”

AEG Presents' Simon Jones, who promoted 35 ÷ shows across three continents, said: "To have the highest grossing tour of all time yet have reasonable ticket prices is something that's just never been seen before and I fully expect Ed to want to go and break his own record again next time. He loves breaking his own records."

The UK dates, which comprised a 2017 arena tour, a 2018 stadium tour and outdoor "homecoming" gigs in Leeds and Ipswich earlier this month, were promoted by Kilimanjaro Live and DHP Family (AEG handled the Scottish dates).

“Ed’s always got an ambition to go one better,” said DHP's Dan Ealam. “He’s always got an eye on what’s happened in the past and to be up there with an act like U2 at his age is just incredible.

"It's awesome that we've been able to keep the ticket prices so low, which I think has also helped sales, so the two things go hand in hand."

"It's an amazing place to be," added Kilimanjaro's Steve Tilley. "We're at the end of the cycle of this album and the records keep tumbling and it's just an absolute honour to be part of the team. It's unbelievable."

Sheeran, 28, told fans on the last date of his Ipswich four-night stand that the show was likely to be his last for 18 months.

“I think he has to have a long break,” Ollier told Music Week. “At this point he’s so omnipresent that it would be a good idea to have some time away. But he’s not very good at having time off so we’ll see how that goes.”