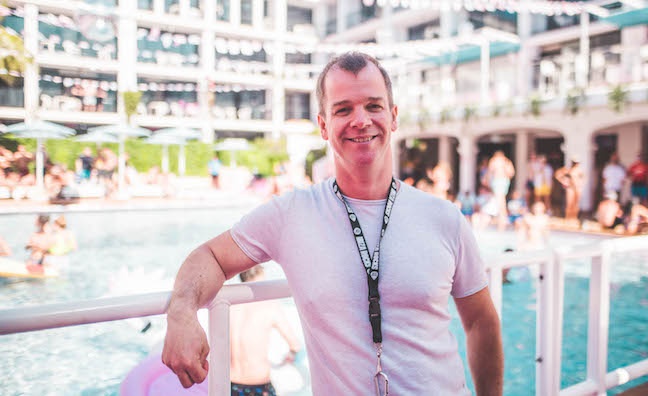 Ibiza Rocks co-founder and CEO Andy McKay has spoken about reshaping the event as the island faces a clubbing shutdown.

In the latest issue of Music Week, we report on the strict Covid-19 restrictions on Ibiza that prevent clubs above 300-capacity from opening.

However, Ibiza Rocks will return with limited capacity from July 1. Because it is a pool party venue and hotel, it is permitted by the authorities to reopen in line with social distancing.

“We are going ahead in a in a very different format,” said McKay. “At the moment, significant talent isn't announced but we're optimistic. I call it the Covid pivot, we’ve all got to do it. The option of just shutting down and waiting, I can see the argument about the social responsibility for that. But on an island such as a Ibiza, I believe you should drive tourism as long as you can do it safely.”

The Ibiza Rocks Poolside Session series will rely on local DJ talent for the early part of the season. Headliners such as Craig David and Rudimental have cancelled sets because of the pandemic. But McKay still hopes to achieve 75% audience capacity for Ibiza Rocks.

“We were fortunate to have around 50% occupancy already, before we started getting proactive in the marketing again,” he said. “We're hopeful that most of that will still come, and we're seeing fairly rapid booking now.

“We did a survey recently where we found that 75% of our audience are happy to be outdoors in an event, and only 43% of them were happy to be in an indoor nightclub. So there definitely is an advantage at the current time for outdoor activity in Ibiza.”

Friendship groups will have an allocated day bed by the pool. Ibiza Rocks will be able to identify and trace anyone in proximity to a confirmed case of Covid-19. All payments will be cashless.

“We can control the capacity, we know exactly how many people are going to come in, we have the lead name of every guest that books a bed,” said McKay. “We have an extraordinarily large amount of influence and control over the situation. So we know we're going to be safe and secure.”

The survey conducted by Ibiza Rocks revealed that there were fears about whether some clubbers would fall in line with the restrictions.

“Their biggest concern was not the event, it was the behaviour of other customers when they were drunk,” said McKay. “So that's the concern: will drunk people behave? That's our customers’ concern, and I think that's everybody's concern.”

Ibiza Rocks’ capacity will be cut to around 700 this summer to manage social distancing.

“The concept of rave nightclubs as we know it, or even what we used to do in in Ibiza Rocks last year – an outdoor day club with a dance floor for 1,000 people – is not compatible with the times,” said McKay. “We just have to accept that. I think most sensible people do accept that. So that's not going to happen.”

While the island has opened up to international tourists and major airlines will operate direct flights, the Balearic government has ruled that most clubs cannot reopen. Only venues with a capacity below 300 can open their doors, but these would be cut to 100 and clubbers would have to remain seated.

McKay called for more creative thinking in the wider clubbing sector to help save this year’s season.

“The suggestion that nightclubs are not going to open is, I think, a blinkered assessment based on the fact that the perception of what a nightclub is is very narrow in Ibiza,” he told Music Week. “What about a tabled night-time venue where there was spectacle and performance indoors? That sort of product, I believe, is very viable during this crisis that we're in. The product that we are putting into the market is, in many ways, the daytime equivalent of that – it's day beds, it’s tables outdoors in the sunshine, all one-and-a-half metres apart.”

McKay suggested that looking back to previous iterations of the nightclub could provide inspiration for this troubled summer season on the white island.

“Well, what's a club experience?” he said. “I think there’s cabaret performance, that’s what nightclubs used to be before our generation came and ripped it up and changed it. There's an older version of a nightclub that is a viable experience. I do believe there is a product that people would be happy to have.”

The Ibiza Rocks boss said the political climate on the island was also a threat.

“There is an element of the [political debate] that would prefer to change the tourism model of Ibiza,” said McKay. “But I think common sense will ultimately win through. The unique selling points of Ibiza are very clear – it’s the beach clubs, the nightclubs, the entertainment, the parties. They're very important for Ibiza.

“Anyone who thinks that that's going to change is going to be very surprised. I do believe that [clubs] will come back with a bang, hopefully next year. And we'll also be surprised at how energetic Ibiza is this year. But just to be clear, I don't see how dancefloors can work this summer in Ibiza. I'm not expecting them to come back and I don't think they should – not this year.”

To read the full report on the Ibiza season, subscribers can click here.