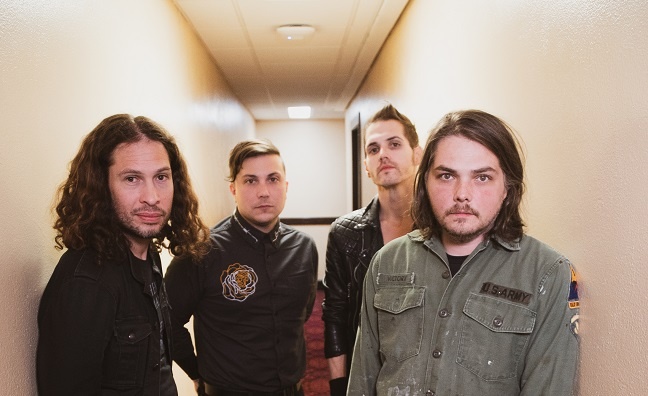 In the new edition of Music Week, the team behind My Chemical Romance’s massive UK comeback shows opened up about how their upcoming stadium extravaganza came to be.

The group – who first announced their hiatus in 2013 and reunited for an underplay show at LA’s Shrine Auditorium in December 2019 – are set to play Stadium MK on June 18, 20 and 21.

The dates will mark their first appearance in the UK since headlining Reading And Leeds Festival in 2011. The first two Stadium MK shows sold 60,000 tickets in under 90 minutes, with the addition of the third bringing the closing tally to 90,000.

“The figures speak for themselves, ” SJM promoter Johnny Phillips, who has worked with the band since 2004, told Music Week. “They are absolutely a much, much bigger entity now than when they called time in 2013.

Here, in an unread extract of our interview, Phillips sheds even more light on how the shows came together…

Where does selling out the three stadium shows so quickly rank in terms of shows you’ve put on?
“Having worked with the band since day one and being at their first shows in the UK, it really is incredible. I think at Manchester Night & Day there were around 60 people, Birmingham was the same and at London Barfly there were a little over 100. So to see them come back and do what they have done is staggering. On a personal level, these are my first stadium shows as a promoter, so I’m incredibly proud to be part of this team.”

MCR members expressed they were taken by surprise by the demand – were you?
“[Laughs] Well, I have to be honest, I figured we had a chance at two nights. One would fly out, of that I never had any doubts, and I hoped we could get two for them. It's only when they dropped The Offering [announcement] video and I saw the reaction that I started to think ‘Maybe, maybe…’ But in terms of the speed in which they sold these shows out, I think everyone involved was absolutely taken by surprise.”

What do these shows say about where MCR figure in the wider constellation of rock right now? From outside looking in, it very much like a sleeping giant has been awoken…
“I agree with that, they have all kept themselves busy individually, of course, but over the last few years you could start to notice all these new kids starting fan pages and Instagram sites saying they wish they had seen them live. You can spend a few hours looking online and there are a vast majority of people who have never seen the band before. You can see also see a lot of original fans, who are now parents, who have gotten their kids into them and are sharing their stories online. That is a testament to what this band meant to so many people since day one. Again, the global reaction is just unbelievable. I don’t think anyone in the industry would suggest otherwise.”

In terms of the speed in which they sold these shows out, I think everyone involved was absolutely taken by surprise

How long have you been trying to get them back to the UK for? We assume the offers have been coming in for many years prior to the Shrine show?
“I think we first started to talk possibilities at the start of 2018 but that was shot down, then at the start of 2019 the door was pushed open and we got into it fully in the summer 2019 and we had everything locked from October last year.”

Why did you chose the Stadium MK? What made it the right venue for their return?
“On a personal level, I think seeing so many rock bands play the bowl over the years was a factor that made MK work. It's got great transport links from the north and south, it's very easy to get to. The stadium itself I went to with their agent Geoff [Meall, Paradigm] back in September to make 100%sure it was the right one and, from the off, I knew it was. It's that simple. Plus, take into account availability and having the option to add multiple dates which you can never guarantee with London stadiums, and it was a no brainer… The sales show we all made the right call here. too.”

The roll-out with all the tour graphics and videos was very impressive. Is that very much a statement of intent as to what’s to come from the shows?
“I have not been part of anything like this in my 18 years at SJM… nothing! The way they handled the return, The Shrine show and then, to start 2020 with the teasers and the videos and images that all made this so much fun to be part of, it took on a life of its own. And that is My Chemical Romance right there. The way we were able to market the UK shows has been amazing, stressful as hell but amazing. I hope this is just the start of things to come, but that’s down to the band.”

So, finally, what do you think is next for MCR?
“That’s a question for Gerard, Frank, Mikey and Ray…”