'It's been an extraordinary response': Stephen Budd on Amnesty and Sofar Sounds' Give A Home gigs 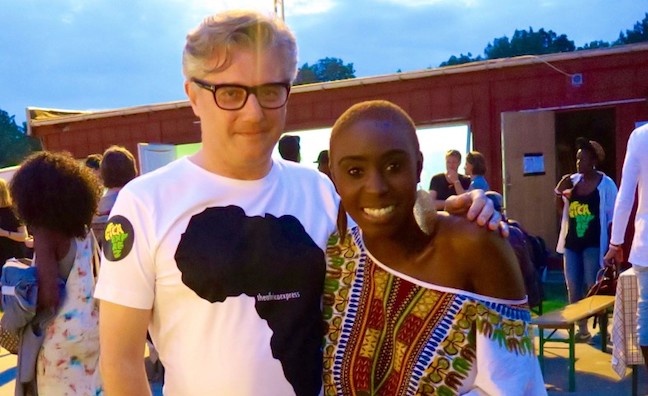 Music manager Stephen Budd has spent the last nine months helping to coordinate today’s (September 20) Give A Home event from Amnesty International and Sofar Sounds. The series of live performances marking World Refugee Day will involve almost 1,000 musicians performing in people’s homes in more than 60 countries. As he prepares for the big day, Music Week spoke to Budd (pictured above with Laura Mvula) about bringing together a line-up that includes Ed Sheeran, The National, Daughter, Wild Beasts, Gregory Porter, Jessie Ware, Hot Chip and Kate Tempest…

How has the artist community responded to the initiative?

It’s been an extraordinary response from the artist community across the globe. We have close to 1,000 artists playing 300 shows in 60 countries, and I have to say the response has been amazing. Over 200 major label and recognised acts from every genre imaginable, playing in most of the world's capitals, in people’s living rooms, all on the same day. From established acts like Ed Sheeran, The National, Rudimental, Hot Chip, Gregory Porter, Ghetts, Hosier, Moby, Jessie Ware, Frank Turner, Max Richter and Laura Mvula to relative newcomers like Jorja Smith, Jack Garratt, Kwabs, Nadia Rose and many more. Sofar Sounds has worked with This is Wired to create Emeli Sande's show at Sam Branson's house in Notting Hill. In London alone we have 40 shows, 20 in New York, LA has 25, Sydney 10, Mumbai has five and the list goes on and on with local superstar acts on in each country.  I don’t know if we should apply to the Guinness Book Of Records for some record or other, but it certainly feels like it!

How did you manage to line up a performance with Ed Sheeran in the midst of his US tour?

Of course Ed was a key wish list act so I first spoke to Stuart Camp, Ed’s manager, back in March. We had met via the MMF’s FanFair campaign and we had heard Ed name-checking Sofar Sounds in a radio interview, so that was hopeful of course. Stuart was into it and promised to talk to him. Holly Branson (Richard’s daughter) who knows Ed also contacted him, as well as some of the wonderful Amnesty people. Stuart came back to me in July confirming - that was a good email to get from him. So a multi-pronged approach that paid off!

You’ve also lined up The National in the UK just as their album’s at No.1…

I had been working with The National's Bryce Dessner on an Africa Express show in Paris in April and he was up for talking to the band about Give A Home. I had no idea their album would be coming out around this time but it has worked out beautifully for us and of course the people of the fair city of Edinburgh, who will get to see them play. The band couldn’t have been more helpful. People are flying in to Edinburgh from around the world for that show by the way.

We have close to 1,000 artists playing 300 shows in 60 countries, and I have to say the response has been amazing

What are the logistical issues with a one-day global event of this nature?

Sofar Sounds has a super-professional central logistics team running over 500 ‘living room’ shows per month in 370 cities. The indefatigable Tom Lovett has been leading this project with me on the Sofar side. He’s also been dealing with the brand partner relations (Facebook Live, Vevo, Shazam and Vice are all a part of the event) and Eric Shea heads up the logistics teams. One of the key issues of course is getting permissions for the live streams, another is the actual 300 locations, ie picking the right home for each show - can they fit each act's stripped-back set-up? The security requirements, of course, and also making sure there is absolutely no secondary ticketing [solved by an effective ‘lottery’/donations method first employed in Budd’s previous Passport To Brits Week project for War Child] were some of the other major headaches.

How was it working with Sofar Sounds – have you worked with them before?

I have a long relationship going back to soon after they started and I put on a Sofar in my home in 2010 with Dry The River and The Magic Numbers. I sit on their advisory board and we'd had such a good experience with the Bastille and Lianne La Havas shows we put together for War Child, this project was a natural extension but on a global scale. Augusta Quiney at Amnesty was the key initial driver within that organisation.

What kind of live experience can people anticipate?

Well, we probably all agree that the excitement and intimacy generated by seeing your favourite artists live, up close and personal, in someone’s living room is hard to beat. I’m a great believer in the power of musical intimacy, it can literally change people's lives. And of course this is being done mainly to support awareness of Amnesty’s refugee program, so it's for a great and timely cause, and many of the major artists will be supported by refugee artists.

Will fans be able to engage online with the event even if they are not attending?

Is there potential for future Give A Home shows?

I hope so! It’s an idea whose time has come. We’ll be having de-brief, of course, with all the partners after the event and I guess we’ll look at what could be improved. Who knows? This is a first-of-its-kind event on a global scale. And its been a joy to work with this team.

Stephen Budd is co-exec producer of Sofar Sounds Give A Home global fund-raiser show series for Amnesty International on September 20.