"It stamps out the boundary crowd and artist": Yungblud reflects on end of Vans Warped Tour 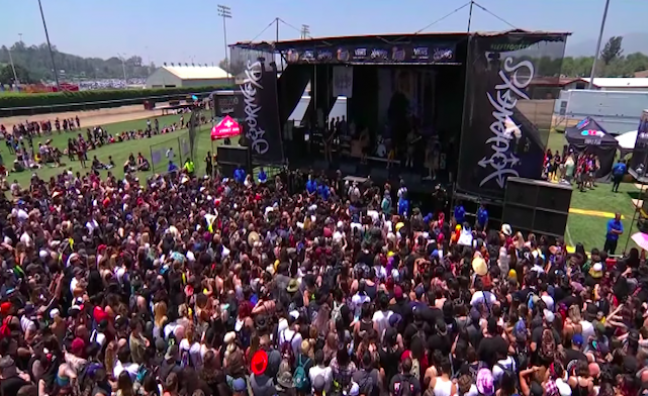 In the new issue of Music Week, a host of top execs and artists reflect on the end of Vans Warped Tour – the legendary mobile US festival. Its founder Kevin Lyman told Music Week there were multiple reasons for the festival’s demise, although he conceded the 2017 run’s ticket sales had been “diminished”.

Regardless, for 24 years the Vans Warped Tour has maintained a reputation for providing a US launchpad for dozens of rising UK rock acts, including of Bring Me The Horizon, Funeral For A Friend and Don Broco.

One of the acts Lyman picked as being a breakout on this year’s tour is rising UK star Yungblud, saying, “He connected amazingly with the shows he was on. He’s going to be a star.”

Here Geffen-signed Yungblud – real name Dominic Harrison – tells Music Week how the tour has given him access to a fanbase that would have been much harder to reach under his own steam...

How does it feel to be on the last ever Vans Warped Tour?

“It’s crazy. I always watched it growing up but I never thought I’d go on it though, as America seems so far away – I’m just from Doncaster, up North, and it seemed like another world to me. So to be on the last Warped Tour is an honour and it’s just insane.”

How does it feel to know that Kevin Lyman says you’re one of this tour’s big hits?

“It’s kind of crazy man, I don’t understand how I’ve come to America for the first ever time and in every city [people] show up. That baffles me, and I don’t understand why because I’ve never been to Hoboken New Jersey, Camden New Jersey, Cincinnati Ohio… To go to these places, usually you’d have about 10 people, but to come here and have 600 kids singing every word off the album when it came out two weeks ago and see them wearing pink socks and black heart tattoos, it’s mad to me. It baffles me, it’s insane. What’s so amazing about Warped is the opportunity it gives me to be one to one with my fans, because that’s so important to me. I love meeting the fans because I feel so connected to them. It’s amazing and I’m gutted that it’s over now that I’ve just discovered what it really is. You see it from the outside, but you don’t know what it really is until you’ve experienced it. It’s special.”

You see Warped from the outside, but you don’t know what it really is until you’ve experienced it

What difference do you think this tour is going to make to your career in the US?

“It gives me an opportunity and a platform to get out here and meet fans all across the US. It’s not just, ‘Alright, we’ll do New York, Chicago, Seattle, LA and Texas’. There’s so many kids in the middle, and what I realised is there’s thousands of young people out here listening to rock music. Isn’t it sad that when we talk about rock and roll music we talk about bands that are all 10 plus years ago? I see 18-year-old kids out here at the Simple Plan shows, and they need a new wave of rock music because they’re fucking lost out here. They love rock music but there isn’t any, and that makes me so driven to almost kind of take the baton of it, and I will! People will be like, ‘What makes you so special?’, but I’m here to take the baton off those guys and pass it on. Because it needs to carry on; rock’n’roll ain’t dead, it was just fucking sleeping.”

So as of next year, the Warped Tour won’t exist – do you think there’s anything else that will be able to deliver that experience in the same way?

“It’s fucking sad. But as Kevin always says, ‘You cannot let Warped die – you have to keep it in your hearts, and keep the spirit of it in what you guys are doing.’ Warped Tour is the scene that stamps out the boundary between the crowd and the artist.  That’s special to me because there shouldn’t be a boundary or a barrier. There’s so many entitled artists nowadays who go, ‘I’ve got the microphone you shut up, I’m going to sing my set and get into my limousine afterwards.’ That’s not changing anything. At the end of the day in my opinion you’re not an artist if you ain’t pushing boundaries or changing perceptions, you’re a fucking singer and I don’t want to be a singer. It’s just fucking fun out here. Thirteen year old me is screaming at the fact I’m out here on Warped Tour.”