LiveNow on Black Eyed Peas at the pyramids, hybrid events and the future of livestreaming 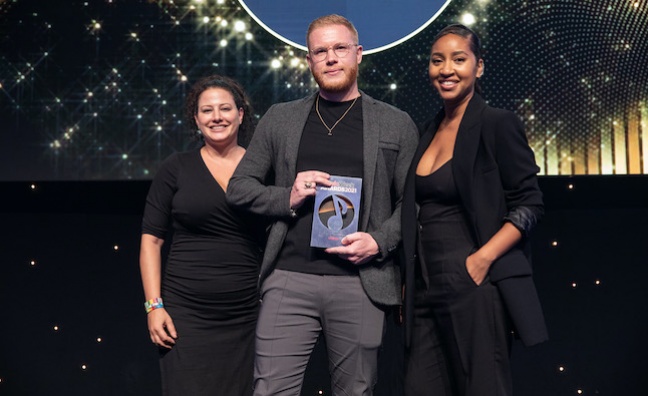 LiveNow and Rob Hallett/Robomagic Live are staging Where Is The Love Stream - Black Eyed Peas Live From The Pyramids in Egypt this weekend.

The one-off concert on October 2 is streaming live to fans across the globe, as well as being an in-person event for 13,000 ticket-holders.

When he collected the award, LiveNow’s James Sutcliffe, chief marketing & content officer, also credited the work of Tap Music. Tap won in the Live Music Innovation Of The Year (Event/Series) for their livestreams by management clients Dua Lipa, Dermot Kennedy and Ellie Goulding.

“I think it's important,” said Sutcliffe of the new category. “What the pandemic has done has really speeded up the technology and innovation, and it's been embraced. It took a little while, but now it's got here. And it’s great for it to be recognised at this kind of forum. Long may it continue.”

“We were up against so many great platforms,” added Natalie Whorms, LiveNow’s head of communications & PR. “We’ve done fantastic projects and the artists we’ve worked with have been amazing.”

LiveNow is growing within the virtual event and experiences space. It offers fans access to live and on-demand content across music, sports, fitness and entertainment.

With the reopening of live events, LiveNow is looking ahead to the hybrid model for music livestreams - in-person concerts that are simultaneously available online to watch globally.

The pandemic probably speeded things up by about five years

Livestream viewing access to the Black Eyed Peas performing in front of the pyramids is priced from £9.99 to £75. The higher prices are targeted at fans who also want behind-the-scenes footage, access to the backstage green room live feed, exclusive signed digital artwork and a limited edition lithograph artwork.

“With the return to live, this is our first step onto that ladder with the Black Eyed Peas for one night only at the pyramids in Cairo,” said Sutcliffe. “We're going to be livestreaming and, hopefully, that will be the catalyst for more hybrid events.

“It’s 13,000-capacity on the ground, and if you don't live in Cairo you can't get a ticket. So we're hoping that this really starts to cement the model that livestreaming can add value and can bring more fans to the music they love.”

“When we first looked at playing Black Eyed Peas At The Pyramids with Venture Lifestyles, it seemed a great opportunity to debut our relationship with LiveNow and stream this historic event live," said Rob Hallett. "This is the first of many hybrid concerts that Robomagic Live are planning with Live Now moving forward.”

Sutcliffe is confident that the hybrid of livestreaming and in-person can become established as a vital new revenue source for the business.

“We hope so,” he said. “In all honesty, I think without the pandemic we wouldn't be where we are. It's probably speeded things up by about five years. We truly believe, and artists, agents and promoters are starting to believe, that this is a real incremental revenue stream that can really help add value.”

The growth of hybrid events also means that a global audience will now have online access to full performances that will be fully live rather than pre-recorded, as the majority of livestreams have been so far.

While that may involve production challenges, Sutcliffe said that the music industry can learn from sport in terms of creating excitement around seeing performances as they happen.

“Black Eyed Peas is live-live, and we're trying to replicate what boxing and UFC [Ultimate Fighting Championship] and the sports world have done so well, that appointment to view,” he told Music Week. “That event is happening at that moment in time and it won't happen again. If you’re a fan of it, you need to be there.”