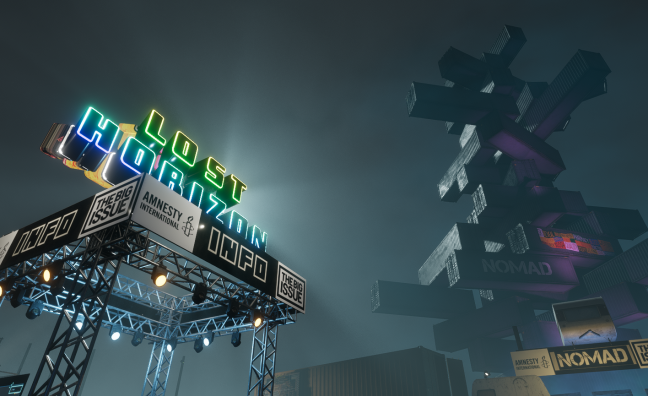 The festival was streamed online and broadcast across VR, PC, iOS and Android along with social media platforms on the weekend of July 3-4. Reach generated by live VR content totalled 11,792,896 people across the two-day event.

The "multi-layered experience" was devised by the team behind Glastonbury’s Shangri-La, in partnership with VRJAM and Sansar, in collaboration with Orca Sound Project and Beatport. It featured a line-up of DJs and artists including Carl Cox, Fatboy Slim, Peggy Gou, Frank Turner and Coldcut, who all took part to raise money for The Big Issue and Amnesty International UK.

Lost Horizon and Shangri-La creative director Kaye Dunnings said: "I don’t think you can ever recreate the feeling of being in a crowd of people, and how powerful that is, but it was spooky how similar it was to the real thing. I met up with friends, made new ones, was able to make an avatar that could dance and the classic festival experience of bimbling between areas, overhearing conversations and marvelling at the wonderful looks people had created for themselves was just like people watching at a festival.”

Director Robin Collings added: “We have been overwhelmed with positive feedback from Lost Horizon Festival! The industry and our community seem to have love the experience and the gathering of creative minds. We are back in creative mode, dreaming up ways to develop and re-imagine the whole experience, expand our audiences and make the platform more accessible.”

"Attendees" had access to move around inside the space, chat and interact with other festival goers, just as if they were at a real life festival. Acts performing on stage were also present in the virtual world, interacting with festival-goers. With nine camera angles in each of the four Lost Horizon ‘worlds’, the online streams were live vision mixed by the team at Video Illusions. Streams of the content are still available online.

Chris Macmeikan MBE, Lost Horizon and Shangri-La director, said: “Lost Horizon broke so many firsts we’re still counting, it is the closest you can get to being at a festival, without leaving your lounge. We all worked really hard  to create this next level thing to see our friends and raise money for The Big Issue and Amnesty. I’m old and remember seeing colour TV for the first time, but this is 100 times better.”