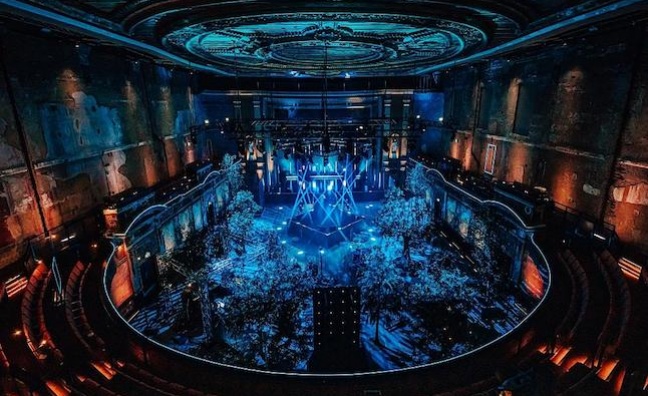 MelodyVR has unveiled the first pictures of its specially designed 360° studio within the Victorian theatre at London's Alexandra Palace ahead of next month's Wireless Connect.

Wireless Festival organisers have partnered with MelodyVR for the three-day virtual festival set for July 3-5 - the same weekend the 2020 event was due to take place. The event will be free to watch, with fans encouraged to make a charity donation to Black Lives Matter over the course of the weekend.

Artists and performers have a separate entrance to the building and will remain in isolation for the duration of the performance without coming into contact with the public or on-site crew, who will handle all technical and production needs from an entirely separate area..

MelodyVR has been running a similarly state of the art set-up in Los Angeles for the last month, where US talent will perform from.

Wireless Connect will include an entire weekend’s worth of unseen performances, and exclusive footage, and will be broadcast digitally to fans around the world and accessible to anyone with a smartphone.

In addition, MelodyVR is working with Spiritland Productions, which is providing its audio truck, Spiritland One and will deliver broadcast audio mixes in stereo and immersive formats. Spiritland founders Antony Shaw and Gareth Iles have previously worked on large scale events such as Glastonbury, Big Weekend and Reading, and engineered Radio 1 Live Lounge, Maida Vale sessions and Radio 6 Music content.

Make sure you can access vital music biz information wherever you are by signing up for our digital edition here.