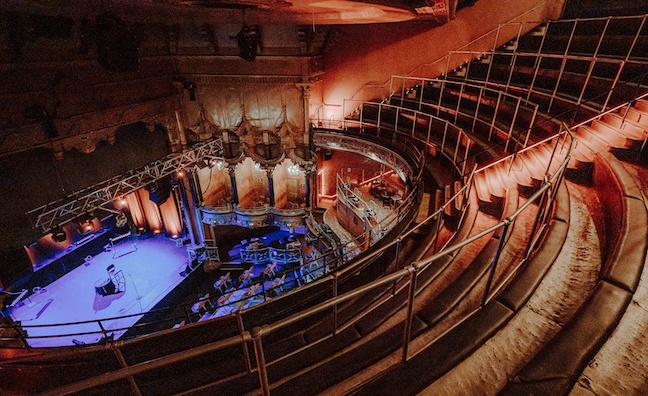 Music Venue Trust (MVT) chief Mark Davyd has warned the "cliff edge" situation facing the UK's grassroots circuit is set to continue for at least the next six months.

Last week, the MVT issued an urgent warning to the government that the sector was now at “red alert status”.

And although the body won an exemption for grassroots venues from the new 10pm curfew as long as the performances have started before that time, Davyd told Music Week the state of affairs remained "incredibly precarious".

“We’ve been dangling our feet off the edge of the cliff for the last six months,” said Davyd, speaking in last week's magazine. "Even though we've now got an exemption for grassroots music venues, which means that performances shouldn't be affected, the bar still has to close at 10pm, so it doesn't resolve the whole problem. It's a very complicated picture and as a team we have definite highs and lows.

"There are extraordinarily bad days - a bad day might consist of 20 venues getting in touch with a problem that seems unsolvable - but there are also good days such as the £2.2 million that went into the Scottish sector [last month]. We had 51 venues, that had never received public funding before, receive a grant from Creative Scotland and that was incredible. That was a great breakthrough, not just for this crisis and the problems we immediately face, but also in the way that venues are respected. A very sizeable proportion of the grassroots music sector in Scotland is now part of the public funding envelope and that has been one of our aims for years.

“But people need to recognise that the fact that we’ve worked very hard and have been quite successful doesn’t mean the problems are over by a long chalk. Certainly, [last month's] announcements suggest this cliff edge situation will continue until at least March next year, and that’s going to require even more work.”

People aren't doing it because it's a commercial decision

While an increasing number of venues - from The O2 and the Royal Albert Hall to the London Palladium and The Grand (pictured) in Clapham - are reopening to stage reduced capacity, socially distanced shows, Davyd stressed the events are not money-makers in their present form.

"The numbers are pretty stark," he said. "Essentially you can run at an average 24.8% capacity and the cost of doing that is roughly 130% of a normal show. You have to have all kind of apps for ordering drinks, table service, entrance and exit, sanitisation and cleaning. All of that adds up to a show that, if it previously cost £1,000, now costs £1,300 - and you've got try and cover that out of 24.8% of the audience.

"As you can immediately appreciate, people aren't doing it because it's a commercial decision, they're doing it for a whole bunch of other reasons. A lot of these venues are very deeply connected to their communities and are deciding to open just to try and get people back to work and some sort of semblance of normality.

"There are some good models coming in though, we're seeing a lot of people thinking about whether they could host a live show and do some streaming and we're working in the background with a number of interesting sponsors and partners and brands, about whether they'd like to support some of that activity. And of course, we have the Cultural Recovery Fund, if the decisions go the way they hope they will go, we will see that public funding coming in and making some more of those type of programming financially viable."

The first announcement on how the government’s £1.57 billion Recovery Fund will be distributed was due yesterday (October 5), but has been delayed by a week for "additional due diligence" - much to the frustration of those affected.

The MVT said: "A week delay may seem, at first glance, relatively immaterial, but the previously announced hard deadline of 5pm on Monday, October 5 for decisions on this essential funding, support which is the mainstay of the government’s approach to prevent permanent closures, has resulted in time limited agreements, both verbal and contractual, between venues and their landlords, breweries, suppliers and staff.

"MVT will be working with venues throughout the weekend to try to renegotiate those agreements, and to provide confidence to all concerned that the Cultural Recovery Fund process still presents the opportunity to save a large number of grassroots music venues from permanently closing."

The organisation also again queried what the government's "Plan B" was for ineligible venues and unsuccessful applicants.

"This is a vital creative sector providing jobs, opportunities, and training for hundreds of thousands, and enjoyment to millions, of people. It needs a sector specific plan, either to protect it or to rebuild it if it collapses," it said.

"We are aware that government feels that its efforts to deliver the Cultural Recovery Fund have not received enough praise. This whole sector wants it on record that the efforts of DCMS, ACE, Creative Wales and Creative Scotland are deeply appreciated, acknowledged and welcomed. But the Cultural Recovery Fund isn’t going to Reopen Every Venue Safely. Saving a venue in Hull isn’t going to help a community in Blackpool that loses its loved space. An artist trying to start their career in Ramsgate isn’t going to get their first gig in Plymouth.

"We can’t leave communities and artists permanently locked out from live music after this temporary lockdown is over. We need a Plan B. We need to Reopen Every Venue Safely."

Meanwhile, Lewis Capaldi, Celeste and Cate Le Bon have joined forces with Amazon for livestream event Prime Day Live in support of MVT, which will stream from 7pm to 9pm this Friday, October 9.