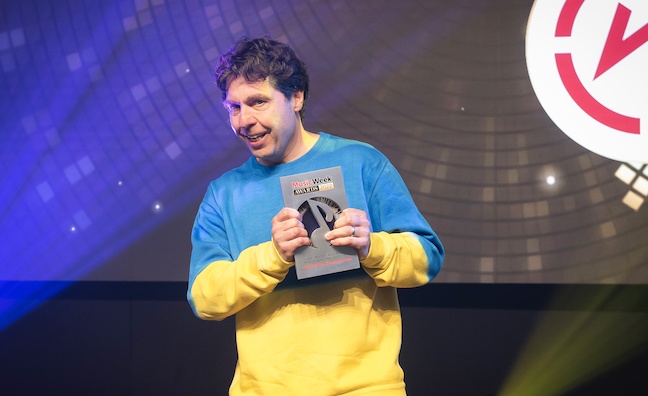 Alex Hardee paid tribute to the life of Steve Strange at the Music Week Awards, celebrating the agent as “one of the biggest in the world”.

Wasserman Music’s Hardee was named Live Music Agent of the year at last month’s ceremony, winning the award he last picked up in 2018. Lucy Dickins, then at ITB, won in 2019, while Craig D’Souza, then of Primary Talent International, picked up the trophy in 2020. Last year saw the category temporarily suspended due to the Covid pandemic.

When we asked Hardee why he thought he’d won backstage, he replied: “Because I always do a funny speech, so everyone votes for me. It’s got nothing to do with my skills as an agent!”

Hardee’s on-stage tribute to Steve Strange, who passed away aged 53 last year, united the room in appreciation for the star agent, who guided the live careers of Coldplay, Eminem and more.

“I love Steve,” Hardee told Music Week. “We grew up in the industry together and it was sad to see him go. He was a one-off character as everyone says and he was one of the biggest agents in the world. He came from out of nowhere, and that was good.”

Back in 2002, Hardee was a co-founder of Coda, which merged into Paradigm in 2019. Earlier this year, Paradigm’s UK was acquired by Wasserman Music.

Reflecting on the last 12 months, Hardee said: “It’s been interesting, we’ve just got back into the business building up, with us being understaffed and building [the team] back up. It’s been a very hard year and it’s going to be a very hard summer because a lot of events aren’t going to be successful.”

Hardee suggested that, while booking agents are beginning to get back to normal, it’s not the same for the rest of the recovering live sector.

“There’s going to be a lot of firefighting this year because we’re just getting back to normal and things are ramping up,” he said. “It’s one of my busiest, most successful years as an agent, but unfortunately it’s not going to be like that for the promoters and the clubs because a lot of ticket sales are down. There are too many events on, so there’s going to have to be a readjustment, plus there’s a cost of living crisis.”

Hardee, though, has faith in the recovering live business to get back to its best.

“Getting everyone back to work, getting back in the office and rebuilding [has been great],” he said. “For us, completing the Wasserman deal has been very good so far, but my highlight of the year was selling out two Knebworths with Liam Gallagher.”