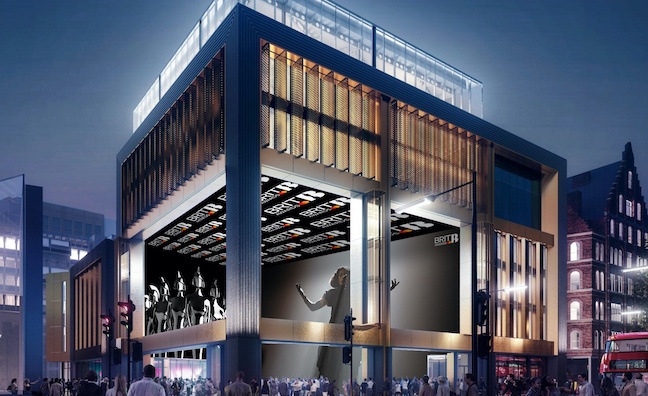 Outernet Global chief executive officer Philip O’Ferrall has spoken ahead of next month’s launch of the new venue on the iconic Denmark Street.

Music Week has been on a tour of Outernet London, which combines a historic location with the latest technology. It is near the site of the Astoria, which closed in 2009 to make way for Crossrail. The Borderline shut in 2019.

As well as the 2,000-capacity, underground Here @ Outernet, the famous 12-Bar club has become part of this major new development and will be known as The Lower Third.

There will also be a third small venue, a recording studio in partnership with the BPI, and the Now Building (CGI render pictured) – a public space at street level with the world’s largest LED screens for adverts and livestreams.

“I love going to The O2, but the difference here is that you can be in Soho in a pub, and within five minutes you’re inside watching a superstar band – that’s pretty special,” said O’Ferrall, a former senior Viacom exec who has previously worked at MTV and Nickelodeon.

“I can’t imagine not selling out every night, but if there are 100 tickets left we’ve got the world’s biggest advertising screens [to alert fans]. It’s semi-intimate, 2,000-capacity, with the best tech and location, that’s what we’re excited about.”

The main Here @ Outernet venue features a semi-permanent stage to allow artists to choose the configuration, a top of the range D&B Audiotechnik sound system, and a custom-built audio-visual control booth that descends from the mezzanine and doesn’t affect sightlines.

The launch next month coincides with the recent arrival of the Elizabeth Line. The Crossrail trains run under the soundproofed venue on noise-dimming tracks.

The main Here @ Outernet venue is set up to enable filming for global livestreaming and immersive AR and VR experiences.

Lower Third gigs can be screened into the Now Building, which features a four-storey, 16K screen surface with Dolby Atmos.

“That [venue] has an HD video feed into our big public atrium, so in some instances we will be livestreaming certain events,” explained O’Ferrall. “Everywhere across the Outernet district is focused on music and entertainment.”

Annie Mac will launch Here @ Outernet with the first official show on September 9, followed by confirmed concerts from Hercules & Love Affair, Alfie Templeman, Miraa May and Sam Ryder, as well as a Jamal Edwards fundraiser featuring Ed Sheeran. Each of the venues will stage a minimum of 100 gigs a year, and likely many more than that.

Paperless ticketing app Dice is Outernet’s partner, so this new venue in the heart of London won’t be affected by the touts who used to do business outside the Astoria. The venue’s RFID-enabled app will alert users in the area to offers, first looks and queue-jumps.

“It's definitely a digital-first business,” said O’Ferrall. “We have to respect people that don't want to do [paperless ticketing], but that's probably the minority.”

It’s semi-intimate, 2,000-capacity, with the best tech and location

The venue is part of the £1 billion Outernet development, which is described as an immersive entertainment, retail and hospitality district, where footfall is estimated at 400,000 a day. As well as the ability to stream performances to the giant screens in the Now building, there are also merchandise retail options for artists in the street-level area.

Roland has opened up a new showroom on Denmark Street as part of the Outernet district. It is the instrument brand’s first independent retail operation in the capital and includes new and vintage equipment.

Denmark Street is, of course, synonymous with music - both its history as Britain’s tin pan alley songwriting district and its longstanding status as a destination for instrument shops.

“When people start to discover us and what we're doing, we want them to have experiences they’ll want to share,” said O’Ferrall. “That's going to be key - almost let people do the selling for us. The only way to treat Denmark Street is with respect.

“Every day there are hundreds of people on that street buying instruments, and every day I bump into someone that is a superstar music artist. Everyone just mixes together, I think that's pretty special.”

“We have three spaces that we’re bidding on currently in North America, and we're evaluating certain people that have come to us in other places around the world,” said O’Ferrall. “For the next sites, I think you'll see us first in New York over the next two years.”

Subscribers can read the full Outernet London interview here - or pick up the latest edition of Music Week.