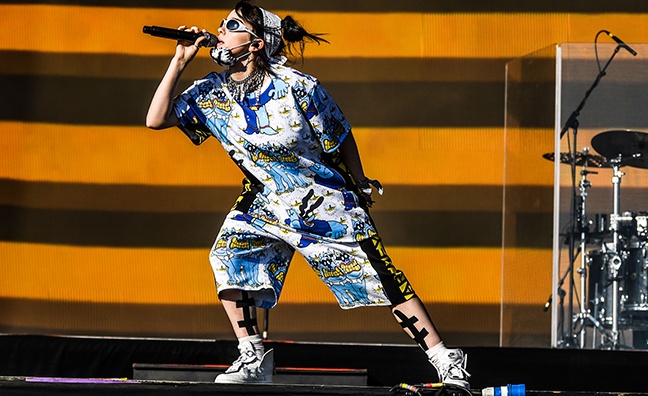 Billie Eilish's agent Mike Malak has spoken to Music Week about the "once in a generation" star's return to touring.

The BRIT Award-winning singer's 2022 Happier Than Ever world tour heads to the UK next June and includes six nights at The O2 in London - an extra date on June 26 was confirmed this week She had been due to play UK arenas in 2020, prior to the Covid-19 pandemic.

The O2 Arena reopened this week with full-capacity shows from Gorillaz.

Paradigm's Malak said demand for Billie Eilish tickets for the rescheduled dates had been "really strong".

"Clearly, there has been demand building up over the last year or so and honestly we are all just excited to get this tour out there and can't wait for fans to be back in the building again," he said.

Billie Eilish's second full-length studio album Happier Than Ever debuted at No.1 on Friday (August 6). Malak noted that deciding when to reschedule the dates had been a challenge due to the global climate.

"The other key factor was ensuring fans that had booked tickets in the past were properly looked after when announcing this run," he said. "Billie cares a huge amount about her fans so it was vital to give them all an opportunity to come back."

Despite high-profile festival slots at Glastonbury and Reading & Leeds in 2019, Billie Eilish's biggest UK headline show to date was at the 2,000-capacity O2 Shepherd's Bush Empire two-and-a-half years ago.

"Truthfully, she made the leap because she is an incredible once in a generation artist with her supremely talented brother Finneas, surrounded by an amazing family and team," said Malak. "Glastonbury and Reading & Leeds were her first UK festivals in her career and both the audience and TV coverage of those events was key in putting her in front of bigger audiences in the UK.

"That being said, the leap was 100% made by the artist, incredible music and the wider team from managers Danny Rukaskin and Brandon Goodman and label Justin Lubliner of Darkroom, and of course the Polydor side in the UK."

Eilish is continuing her work with sustainability partner Reverb for the tour, complete with the fan-facing Billie Eilish Action Village at each show. The partnership will focus on climate action and climate justice, hosting and supporting BIPOC and women-led environmental organisations as well as a comprehensive programme via Reverb’s forthcoming Music Climate Revolution campaign.

"We have partnered up with Reverb who are helping us make this tour carbon positive," explained Malak. "This is a really important mission and hopefully as the shows roll out there will be an element of education for the fans on the impacts of carbon emissions. Other than that, we just can't wait to see packed rooms and smiling faces."

Eilish has also announced details of her new concert film, Happier Than Ever: A Love Letter To Los Angeles, which will premiere on Disney+ on September 3.