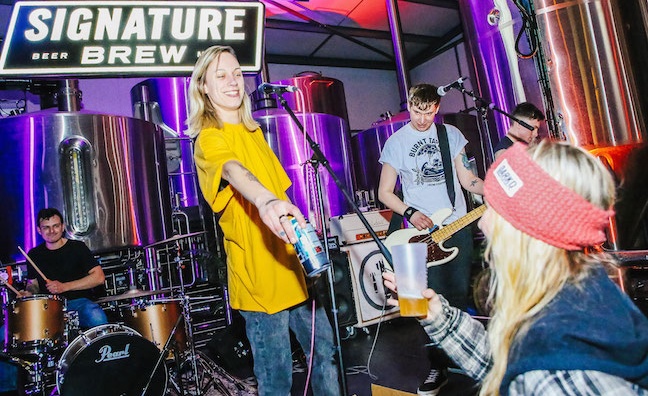 Signature Brew has announced a £250,000 commitment to live music, with beer grants from £500 to £5,000 in value offered to independent music venues nationwide.

Venues can visit the Signature Brew site and fill out a short application form.

The last 12 months have incredibly tough on the UK's independent music venues, leaving over 550 venues in danger of closure and prompting a campaign from the Music Venue Trust.

With that in mind, Signature Brew are pledging £250,000 worth of beer to help kickstart the return of live music. Successful applicants will receive an allocation of the brewery’s Studio Lager to make sure their taps have fresh beer and to help generate revenue.

Additionally, a portion of the fund will be allocated to touring musicians. Artists with gigs or tours booked in the UK within the next 12 months will be eligible to apply for their share of the beer, which they’ll be able to take on the road with them.

Signature Brew co-founder Sam McGregor said: “We’re passionate about live music and we’re going to help independent venues and musicians however we can. The idea for the Beer Grant scheme came from wanting to offer the thing we do best as a way to make life easier for venues and touring bands after an unprecedentedly difficult year. We want to help as many venues as possible and we believe the Signature Brew Beer Grant will contribute to safeguarding the future of the UK’s music scene.”

Gus Unger-Hamilton, of Alt-J, said: “Independent venues have it tough even in years where they're not forced to close due to a pandemic. But without these venues, many emerging artists would have nowhere to cut their teeth, and the music industry would be much poorer from top to bottom. This initiative from our friends at Signature Brew – we made a beer together a few years ago – is an innovative and fun way to extend some much-needed help to some brilliant places and help them get the show back on the road.”

Led by founders Sam McGregor and Tom Bott, Signature Brew were founded with a mission to revolutionise the quality of beer at live music events. Launched in 2011, Signature is the world’s number one brewery for band collaboration beers, having brewed with Idles, Mogwai, Alt-J, Slaves, Mastodon, Frank Turner, Rodney P, Enter Shikari, Sports Team, Dynamite MC and many more.

In 2020, Signature Brew hosted a series of socially distanced gigs at the brewery to keep live music playing,

Signature Brew is gearing up for a summer of live music, culminating in a 10-day festival of events, to mark their 10th birthday in August.