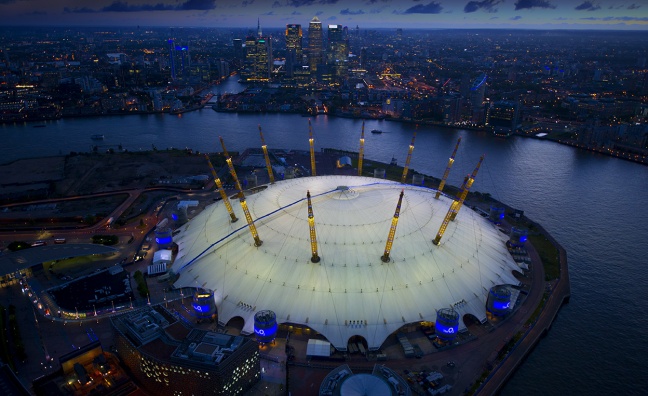 The O2’s programming director Christian D’Acuna has told Music Week how the ongoing uncertainty of the Covid-19 pandemic has impacted on future booking plans.

“For 2022, we’ve got 87 performances confirmed when usually, by this point, we’d have an average of 20 performances confirmed. When you get to this level, the artist makes two or three-year plans. If they started recording an album at the beginning of 2020, they’ll already have been planning their arena tour for ’22. So the 2020 and 2021 backlogs and ’22 [tours] are all trying to cram into one year, which has meant that in some instances, promoters have put shows into 2023 in order to get first pencil. I think ’22 and ’23 should be extremely busy years for us because of the backlog."

Market confidence isn't where it was before the pandemic yet, but it's definitely improving

D'Acuna was speaking in the new issue of Music Week as part of a feature dissecting the live sector’s greatest hopes and fears for 2022, and the possibility of market saturation due to the huge number of artists wanting to tour next year. D'Acuna reported that ticket sales at the venue were on an upward curve.

“We had five different shows on sale last month and it was the most successful week we’ve had at The O2 since the beginning of the pandemic,” he said. “Artists like Royal Blood and Billie Eilish have done well during a bit of an odd time to go on sale when it comes to market confidence. Market confidence isn’t where it was before the pandemic yet, but it’s definitely improving.”

The O2, which hosted the BRIT Awards pilot event in May, is running a series of Welcome Back Shows headlined by Burna Boy, Alanis Morrisette and Wizkid, among others, that will see the arena host full capacity crowds for the first time since March 2020.

Gorillaz and Liam Gallagher are also both set to play free shows for NHS workers at the London arena in August, while other concerts due to take place in the remainder of 2021 include Gary Barlow, Bring Me The Horizon, Haim, Genesis, AJ Tracey and Elton John.

“Most of the artists currently pencilled in for ’21 have got a plan B in ’22, just in case,” added D’Acuna. “We’re committed to those artists willing to stay in ’21, because we don’t want to be able to reopen and have an empty diary. But the majority of international acts aren't looking any earlier than, say, April '22 now.

“But we're excited to be putting on sale new content for the first time in a year-and-a-half and confidently - or as confident as you can be right now anyway - talk about them and say they're going to go ahead."