'There is a real excitement building': Wembley Stadium gears up for Ed Sheeran's return 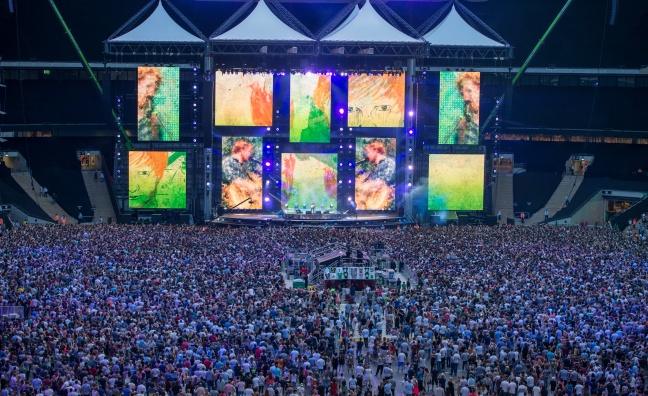 Ed Sheeran brings the ÷ world tour to Wembley Stadium tonight for his first concert at the venue since his acclaimed three-night stand in 2015.

The singer has already played multiple stadium gigs in Manchester, Glasgow and Newcastle in recent weeks and heads to Cardiff following the four London dates, which conclude on Sunday.

"There is a real excitement building about the gigs amongst the staff here that we are about to host a real global superstar," Wembley's senior commercial manager James Taylor told Music Week.

"I was at his warm up gig for Glastonbury at The O2 last year and remember thinking what a series of shows we are set for at Wembley. The crowd knew the lyrics to pretty much every song so to see that escalated over four sell-out shows here will be something I’m really looking forward to."

Sheeran's hat-trick of gigs at the stadium three years ago, co-promoted by Kilimanjaro Live and DHP Family, completed his rise to live music's top table. The first night has been immortalised by the concert film Jumpers For Goalposts and featured a cameo from Elton John, who duetted with Sheeran on Don't Go Breaking My Heart and Afire Love.

"I was mainly working on the sports side of the business at the time but came along to a couple of the shows and remember thinking how well he held the crowd given its simply him, a guitar and a loop pedal," said Taylor. "His engagement with the crowd is fantastic and he really showed that he was going to go on and become one of the biggest acts out there which has certainly held true.

"The performance with Elton John on the first night was also a standout Wembley moment. We are all really excited to see what he has lined up for this year."

The four-night residency will take Sheeran's total number of Wembley Stadium headline shows to seven, trailing only Take That (12) since the new stadium opened in 2007.

The venue, which hosted the Capital Summertime Ball on Saturday, concludes its summer music programme with two nights by Taylor Swift from June 22-23, staged by Live Nation and SJM Concerts.