'We have got to change the law to protect small music venues': UK music biz unites in support of the grassroots circuit 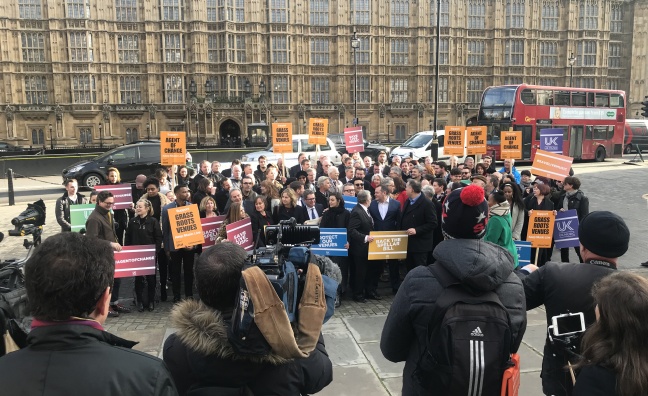 Plans to enshrine the agent of change principle in law to help protect the UK’s grassroots venues circuit have been given a huge boost.

Labour MP and former Government minister John Spellar tabled a proposed new law yesterday in the House of Commons, which would mean developers would have to take account of the impact of any new scheme on pre-existing businesses like music venues before going ahead with their plans. The Planning Bill will receive a second reading in parliament next week.

“As Paul McCartney says, [The Beatles’] career could've been very different had they not had the pubs and clubs to play when they were starting,” Spellar told Music Week. “What I want to see is that pipeline of talent, which has led to such a great British music industry, maintained.”

MPs, artists and music industry executives congregated in Westminster yesterday to back the move, which has the support of at least 75 MPs and peers, as well as organisations including the Music Venue Trust and the Musicians’ Union. London Mayor Sadiq Khan has also included the agent of change principle within his new planning strategy.

"Everybody is united in saying we've got to change the law to protect small music venues,” said UK Music CEO Michael Dugher. "Agent of change is something that many of us have campaigned for for a very long time and finally - thanks to John Spellar - we've got a bill going into the House of Commons.

“Ultimately, we want it to go through the Commons, through the House of Lords, and we've got support from MPs from all the major parties. The only people we haven't got support from yet is the government, so we're hoping that they'll listen to the very strong voices of artists and music industry and grassroots community campaigners and give this bill the support it needs.”

Dugher said new legislation would give venues “guaranteed protection of the law”. “At the moment, agent of change only exists in guidance,” he explained. “The problem with guidance is too often it can be, and is, ignored. This would finally give grassroots venues the protection they need of the law so that if developers move into an area, they've got to be responsible for the changes that happen.”

Over the past decade 35% of music venues across the country have closed. Among the venues that had to fight closure threats in the past are London’s Ministry of Sound and the 100 Club. Venues that face similar threats today include Bristol venues, the Thekla, the Fiddlers and the Fleece.

AIM CEO Paul Pacifico said: “Small venues are the training ground for our artists and musicians. How can we expect to keep our place at the forefront of contemporary music globally if we're not providing those opportunities for development and training?”

Campaigners are also battling to protect the Womanby Street music quarter in Cardiff from developers, while The Square in Harlow, which hosted the Coldplay, Blur, Supergrass and Muse when they were starting out, closed last year as a result of a planning dispute.

“We can't rely on Ed Sheeran and Rag'N'Bone Man forever and it's from these grassroots venues that the new talent of tomorrow comes,” said Musicians’ Union general secretary Horace Trubridge. “I'm really concerned because I know a lot of really talented young musicians are finding it very hard to find places to play at the moment."

“I think I'm probably past the point of playing small clubs but it really affects the development of young bands, particularly in a world where now it's harder and harder to make any money out of recording,” Mason told Music Week. “It's becoming tougher and tougher to find anywhere where you can actually learn the craft of playing live.”

Bragg added: “With the music industry changing the way it has, one of the few places it's still possible to make a living is playing live and, for young bands starting out, they need somewhere to do their apprenticeship.

“I did my apprenticeship in a place called The Tunnel Club, which is in a boozer just south of Blackwall Tunnel and I spent three months in late 1982 playing there Thursday, Friday and Saturday, opening for anyone who I was there, and it's how I learned how to hold a crowd. Those kind of venues are far and few between, particularly for young bands, so hopefully this bill will actually keep some of those venues there.

“We're in a situation where every little bit of space is being turned into houses. So anything that can stand up to the power of that is worth trying, is worth doing.”