'We must fix it': Boris Johnson pledges to address EU visa crisis for touring musicians 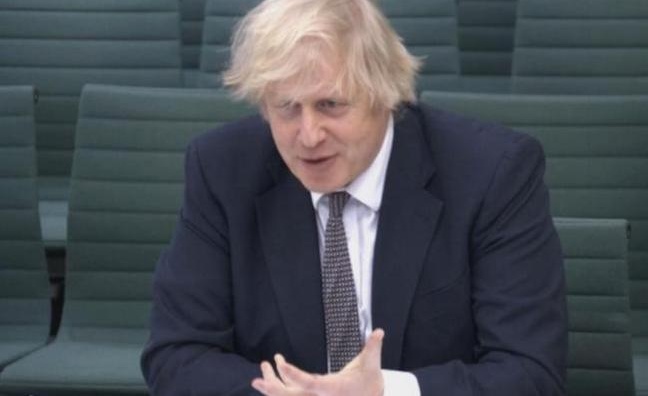 DCMS Select Committee chair Julian Knight MP quizzed the PM over the issue when he appeared before the Liaison Committee at Westminster today (March 24).

It follows three months of arguments about the failure of the trade deal with the EU to secure visa-free touring for artists.

Knight told Johnson that workers in the creative industries now faced “uneconomic visa fees”, struggled to move instruments and kit and were losing work to those with EU passports.

He asked: “Why were these sectors allowed to suffer a no-deal Brexit?”

Johnson replied that talks were under way with the UK’s EU partners and he was “passionate” about the ability of artists to be able to tour freely.

During a recent parliamentary session with DCMS Minister Caroline Dinenage, it emerged that the UK-EU trade agreement could not be revisited. Instead, the solution for artists and musicians will depend on the government’s bilateral arrangements with EU countries, which each have different rules on visas for musicians and crew.

At today’s session, the Prime Minister said the government was working “flat out” to find a solution.

He added: “I want to say how strongly I share the frustrations of the sector. This is a massively important part of the economy that contributes many of billions of pounds to the economy and jobs and to the general joy of the nation. It is hugely important and they are also a massive export industry. We must fix it.”

Knight said ministers should get involved to "short circuit" discussions with countries that "seem to be the most recalcitrant" such as Italy, Spain and Greece.

Johnson agreed that things "must get ironed out" and that it needs to be "a two way street" with the EU.

We stand ready to support government in these negotiations with different member states, which must be an utmost priority

UK Music chief executive Jamie Njoku-Goodwin said: “It’s very welcome to hear the Prime Minister highlight the importance of the UK music industry and promise to resolve the huge challenges musicians and crews are now facing when it comes to working in Europe.

“It is also good to hear that the government is ‘working flat out bilaterally with countries’, and we look forward to hearing of more progress on this front soon. We stand ready to support government in these negotiations with different member states, which must be an utmost priority.”

Knight also raised the return of festivals and said organisers are nervous because of problems with Covid cancellation insurance.

He asked for the PM get involved to "back a Covid secure summer of fun rather than condemning us to a summer of none".

Johnson said that Culture Secretary Oliver Dowden has done a "huge amount of work" to get the sector ready for reopening.

The Prime Minister said he did not want to see people unwilling to take risks when putting on events this year because they are scarred by memories of last year.

At a separate DCMS session on festivals, Culture Minister Caroline Dinenage said she was not convinced by proposals for a government-backed insurance scheme.

Dinenage said: "As the minister responsible for this, I would much rather be able to make an announcement when I am absolutely certain things can go ahead, or at least in a much better sense of predictability that things can go ahead, than announce an indemnity scheme, give people the confidence in order to pull the rug out from underneath them again. I just wouldn’t be prepared to do that.”