'We're in an incredibly interesting period': The music biz unites at ILMC 30 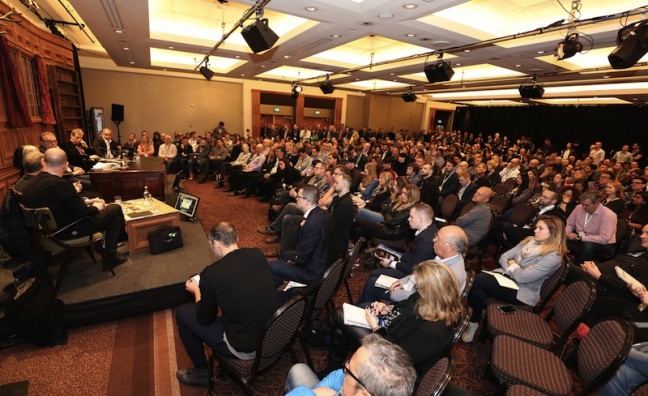 Panel topics included ticketing, festivals and mental health, while Gender: Calm Down, What's The Fuss? pondered whether live music has a problem with gender and equality.

Speaking in the latter session, CAA UK co-head Emma Banks, agent for the likes of Arcade Fire, Kylie Minogue, Lorde and Green Day, said: "If you don't represent what is going on outside the front door you're going to miss people - and that's what we have to look at.

"if you're missing entire types of people then you're not going to have the interaction with them that you need, Whatever your ethnicity, your sexuality, you want to see somebody that you can relate to - that's what I think we need to be doing."

There was also an ILMC first in closing panel The Music Business: United We Stand, which brought together six industry figureheads to discuss what shape the joined up wider business will take. Here are some of the biggest talking points to come out of that session...

Blue Raincoat Music's Jeremy Lascelles argued the make-up of the music biz was fundamentally flawed. "If you were starting the music business from scratch you would not have the landscape we have now with all these different fractured rights, all these different competing elements. You'd have a simple structure where you'd have an investor, you'd recognise all the different revenue streams and that investor would provide skill and expertise in each of those separate areas. You'd have a very different landscape than the rather contorted one that we've got to because of the paths of history."

Lascelles added that it was, nevertheless, a "fascinating" time for the business. "It's all kind of up for grabs," he said. "We're in an incredibly interesting period where an artist doesn't have to be broken or guided or advised, particularly when they get to a more advanced stage of their career. They can do stuff entirely to suit their own particular need. The old model doesn't have to be applied to.

Lascelles also weighed in on now derided 360 deals, insisting it was the execution - rather than the concept - that was at fault for their bad rep. "This phrase '360' has become so battered around the head because it hasn't worked," he said. "It was done clumsily, it was done with people trying to reverse into places that they didn't offer any expertise, trying to make a land grab for revenue streams because their revenue streams were diminishing. It was incredibly clumsy and awkward and not well executed. But I think, if you start from a different perspective, there's absolutely a perfectly valid justification to say one investor, multiple sources of revenue, fairly distributed between investor and artist [can work]."

Continuing on a similar theme, ATC Management partner and director Ric Salmon added: "It didn't work, I think, because the timing was wrong before, I think it's absolutely possible for it to work now. I definitely think you will see successful businesses that will be doing the full-stack service and doing it well."

Salmon also spoke of the importance of making the ecosystem between the artist and fan as simple as possible.  "Historically, there have been far too many mouths to feed in that ecosystem," he said. "But the fact is for all of us in all of our sectors the simpler and purer that ecosystem, the better for all involved and it creates efficiencies, it creates cheaper ticket prices, it means more tickets will be sold, it means more things will be streamed, it means fans get a better connection to their artists etc etc. That's a key focus for all of us."

He added: "Five years ago, 200,000 people would go out and buy a CD, and we didn't know who any of them were. We didn't know how we could contact them again, how we could sell a ticket to them, you couldn't do any upsetting because you didn't have the data. Now we know who our fans are, where they live, what else they buy... You can upsell everything to them."

Live Nation president of UK touring Sam Bush reflected on the live industry's relationship with management and labels. "The most successful campaigns are when everyone's on the same page and there's open communications and shared information between all parties," he said. "It's important for us, more than ever, with streaming that we're putting the shows on sale at the right time, there needs to be music out there, the music needs to be connected to what are the right rooms to play. The more hands-on you can be from all sides, the better."

BMG's Korda Marshall pointed out that against the backdrop of declining physical sales, the artist's own brand has become key: "Obviously in the landscape of how music is consumed, the process of brand value is really, really important," he said. "We're running a very small specialist brand development agency. We're all brands: Morrissey's a brand, The Prodigy's a brand so we manage it in a brand value context. I'll get judged by how successful the money that I make from the music is. If I make the brand successful I'm cognisant to know that we'll make enough money to make the numbers add up."

Things are looking up

Salmon was buoyant about the direction the business is heading in. "There's money coming in at the top of the pipe in all sectors," he said. "There's a lot of stuff to sort out how that gets funnelled down, as we all know, in every area, but it's exciting times. For all the challenges, it is an incredible time for artists to come through because they have more control, more freedom and amazing partners to work with."

Marshall said the potential for streaming growth remained enormous. "There's only 74 million people streaming worldwide who are paying £10 a month [subscription]," he said. "Imagine when that number is a billion..."

And Salmon ended on an equally positive note. I would be shocked," he said, "If in 10 years' time, the recorded sector isn't twice the biggest it ever was."