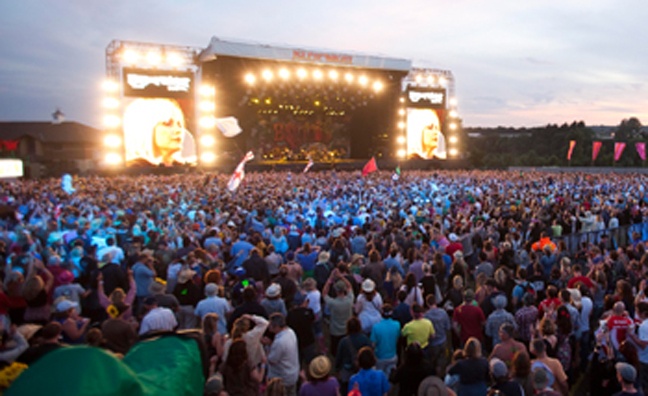 Ahead of this year’s Isle Of Wight Festival, promoter John Giddings told Music Week that the £10 million bill for staging the event was what ultimately persuaded him to sell a majority stake to Live Nation after 15 years. A year after the acquisition was approved, Music Week has learned that those burdensome costs meant that the iconic festival was sold to the concert giant for just £1.

“You need a safety net to help prop it up because I can’t afford to lose the amount of money it costs to do now personally, I need financial support,” said Giddings in our June cover story.

Now the breakdown of the deal, which allowed Live Nation to buy the festival for less than the price of an ice cream at Seaclose Park, can be finally be revealed. Parent company LN-Gaiety Holdings acquired the trade and assets of the Isle Of Wight Festival for a consideration of £1, according to documents lodged at Companies House.

The deal has come to light as the Association Of Independent Festivals (AIF) called for an investigation into Live Nation’s “dominance” of the market in outdoor events with a 5,000-plus capacity.

Following a Competitions & Markets Authority (CMA) investigation of the Isle Of Wight deal, the takeover was given the go-ahead in September 2017. The acquisition by LN-Gaiety showed that the festival owed £378,426, but money due from debtors and prepayments totalled £378,526, leaving a surplus of £100.

However, a further £698,820 was racked up in legal fees. Ultimately, LN-Gaiety lodged goodwill of £698,721 in relation to the transaction, so that £1 price tag doesn’t tell the complete story of the value of the storied festival’s brand.

What’s also interesting about the deal is that Isle Of Wight Festival Limited was incorporated in July 2016, almost eight months ahead of the acquisition and more than a year before it was finally approved. LN-Gaiety owns 75% of Isle Of Wight Festival Limited, with Giddings listed among the new company’s directors and Solo Promoters named as a related party in the ownership structure.

Isle Of Wight Festival Limited issued its own results for its first 17-month period ending December 2017. It reported a loss of £1.65m, while the amount owed to creditors (£3.2m) dwarfed debts payable to the festival operator (£674,713). LN-Gaiety was among those creditors: it was due to receive £330,098, while Solo Promoters Limited was owed £221,373.

The CMA review’s timeframe meant that the new company was unable to run last year’s festival. The 2018 edition, featuring Kasabian, Depeche Mode, Liam Gallagher and The Killers, was the first time it was controlled by Live Nation.

This year, the Isle Of Wight Festival marked 50 years since the inaugural edition. Following a gap of three decades, it was revived in 2002 and has seen headline sets from The Rolling Stones, Coldplay, The Police, David Bowie and Jay-Z.

Neither Solo Agency or Live Nation responded to requests for comment about the acquisition.

Pick up the latest edition of Music Week for an interview with John Giddings, who’s this week’s subject of The Aftershow.