Dave's managers on the BRITs star's 'potential for greatness' 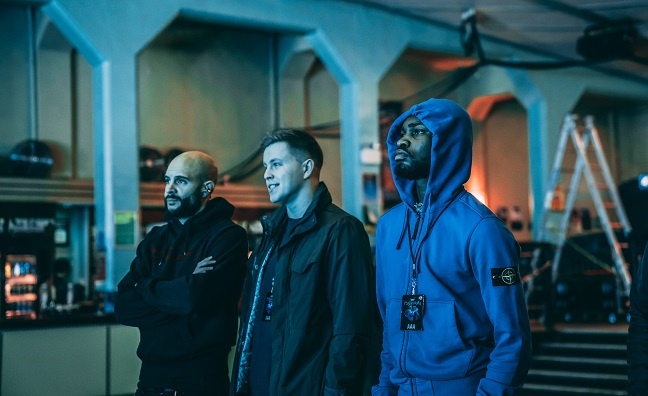 Dave’s co-managers Benny Scarrs and Jack Foster have told Music Week that the BRIT Award-winning rapper is the most exciting artist they’ve ever worked with.

Speaking in the new edition of Music Week, Scarrs and Foster (pictured above, with Dave) reflected on Dave’s career so far and opened up about their management philosophy. The pair have been working together on various projects for around a decade, notably Tinchy Stryder’s debut album Catch 22, and co-founded management company and label Neighbourhood after meeting Dave.

Earlier this week, the Streatham rapper stole the show at the BRITs, delivering a powerful performance of Black alongside Fraser T Smith and winning Album Of The Year for Psychodrama.

“We’re very grateful that something we all believed in so much has been recognised on such a level,” said Scarrs. “When music can start a dialogue that goes beyond entertainment and creates a conversation, that can only be a good thing. Conversation is how we get to better understating one another.”

Foster said Dave’s talents were evident when they first met after discovering a freestyle video in 2015.

“It was pretty obvious that he was pretty special. He was full of ideas, pushing us straight knew and obviously the music was ridiculous,” said Foster.

Scarrs said that Dave’s “cup of creativity is brimming over”.

“He’s also highly intelligent as a human and those two things combined are quite unique,” he added. “He’s focused, driven and has such clarity of thought regarding where he wants to go and understands the process inherently. He’s very studious; when Dave is into something he really unpacks everything about it. He has a very young, high energy, and incredible ambition. I’ve seen these different elements in different artists, but maybe not all combined and definitely not to this degree.

“He’s certainly very different to anyone I’ve ever met. You see the potential in Dave, even if he has not delivered five records and done a stadium tour, but the potential for greatness is really within him. I’ve not felt like I’ve been next to that before.”

The potential for greatness is really within Dave

Foster said that, back in the early days, Dave wasn’t concentrating on the music industry he was entering into. “He had ideas of how he wanted to release the music, I don’t think he particularly cared about how the music industry worked,” the co-manager said. “He probably still doesn’t. He just has his own way of thinking and he wants the world to fit to his vision.”

Scarrs and Foster were crowned Managers Of The Year at the Music Week Awards last year, while Dave won the Mercury Prize months later.

“From when we met Dave we’ve just spoken to him every day, for whatever reason,” said Foster. “It sounds very simplistic, but it wasn’t crazy difficult to build, it happened with time and a lot of conversations.”

The managers said they feel that the 21-year-old Dave has taken success in his stride. “He’s a young man, we’ve seen him turn from 17 to 21, that’s a huge time in life just as a normal civilian,” said Scarrs. “To add the complexity of being an artist and becoming high profile, it’s not easy.”

They said a ‘less is more’ approach to promo and touring has allowed Dave’s personality to come through via his music. “Dave can be hilarious and be the life of the party and he has songs that show that side of him, but then he also can be incredibly deep and introspective and he’s well read on current affairs,” Scarrs noted.

“He knows it’s important to have balance and to be able to soundtrack someone’s week from a Monday morning to Friday night. We know he’ll sit and have a great conversation with certain people at certain times, but to then repeat that conversation again maybe takes something away. Being everywhere playing every show and doing every ticket possible can deplete your cache a little bit.”

Scarrs believes the relationship that he, Foster and Dave have developed can lead to big things.

“I’m really glad that we have a relationship where we can be very honest with him about how we feel,” he said. “It’s not an easy thing to do, but it’s necessary if you want to be great.”