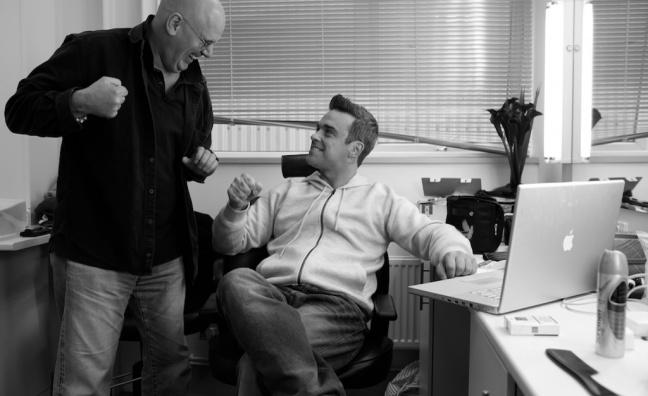 As the music industry prepares to celebrate the life of the legendary artist manager, Music Week spoke to friends and colleagues about one of the of the business' greatest characters...

Three words figure in almost every conversation about David Enthoven: larger than life.

Enthoven, whose music business career began in the 1960s and who died aged 72 after a short illness, was a physically imposing figure, but his gregarious nature meant that – even in a fledgling UK music business populated by colourful characters – he stood out.

There was, as many of those paying tribute to him note, a touch of the rock star about him – and, over the years, it was his intuitive understanding of the nature of artistry that would help so many of his charges achieve superstardom.

Raised in East Sussex, Enthoven attended Harrow School, later becoming a roadie for some fellow schoolmates who formed a band, A Band Of Angels, including guitarist Johnny Gaydon.

The pair eventually formed EG (the name coming from the initials of their surnames), a management company and independent label which made its name by taking on prog rockers King Crimson.

Enthoven signed the band to Island Records, which is where he first met Tim Clark, later to be his partner in artist management company ie:music. Clark recalls the pair forging their friendship over long sessions at the EJ Day printers, poring over the iconic sleeve to King Crimson’s 1969 album In The Court Of The Crimson King.

“We spent a fair amount of time there making sure all the colours were right and everything was spot on,” says Clark. “David was a stickler for detail, he really was.”

Enthoven himself was cutting quite a dash at this time as well, as EG became the hippest company on the block. Nick Stewart, founder & CEO of Nick Stewart & Associates, recalls first meeting him as a Harrow schoolboy and King Crimson fan in 1970.

“It was pretty much de rigueur for any self-respecting young rock fan to have a copy of In The Court Of The Crimson King,” he says. “Every house on Harrow-on-the-Hill would be blasting out 21st Century Schizoid Man on a pretty regular basis. On this particular Saturday, another sound was heard.

Two enormous Harley-Davidson choppers arrived, being ridden by the managers of King Crimson - David Enthoven and Johnny Gaydon, both present that day to play an arcane indigenous game, Harrow football.

The sight of these two characters on their bikes was generally remarked upon as the coolest thing that had happened at the school in living memory and one or two of us decided that’s what we wanted to do - get into rock’n’roll.”

And Stewart did, joining Island alongside Clark in 1979 and then EG itself seven years later.
“Without David I wouldn’t be in this business and he helped not only myself, but many others in their careers during his 40 years in the business,” says Stewart. “He was a truly lovely gentleman and I shall miss him terribly.”

“I first met David when he managed King Crimson in 1968,” he says. “He rode into our college car park with his EG partner Johnny Gaydon on their matching Harley-Davidsons, the big ‘60s Easy Rider pose. The Londoner in me said, King’s Road tossers! We had known each other on and off ever since. Became colleagues and great friends.

“For the past 20 years, we have worked together with Robbie Williams. I help make the records. We always work as a team. No politics and we always had each other’s backs. To say I will miss him does not begin to express how this feels.

David had been a huge part of my life. His strength, his humour, his advice – blunt and to the point – and his unselfish support when things are not going swimmingly. I loved him and will never forget what we achieved together and what he did for me personally. He was immense... literally.”

In the ‘70s, Gaydon and Enthoven left EG and Enthoven struggled with addiction. Having gone into rehab in the 1980s, he made a return to the music business in the early ‘90s, in partnership with his old friend, Tim Clark, with whom he’d stayed in touch during his personal difficulties.

Clark remembers agreeing to share an office with Enthoven but warning him, “David, if you think I’m getting into management, think again!” However, one thing led to another and the pair were soon pitching artists to labels together.

Both had been away from the business for a while and Clark notes that, although “we knew all the bosses, we didn’t know the young A&R people. You’d walk in their office and feel, Oh my God, we’re just the old farts.”

Their fortunes were transformed when they were brought in as consultants to Massive Attack manager Marc Picken. “Nothing had changed,” says Clark, “But, all of a sudden, we were the two wise old gurus.”

Their company really took off, however, when they took on Robbie Williams, then struggling to launch his solo career. Enthoven and Clark introduced him to songwriter Guy Chambers and guided him to megastardom, on Chrysalis/EMI.

“They started as they meant to go on, with great intent and purpose. I remember David being this incredibly larger-than-life character. From the day he took on Robbie as a client, it was all about the artist. That was the centre of David’s world, which was what made him great.”

Tony Wadsworth, then at EMI, also worked with Enthoven and Clark as Williams went on to dominate the UK charts as few artists have done before or since.

“It was only after working with Robbie for several years that I realised almost all the artists I followed when I was in my late teens were managed by David,” says Wadsworth. “He was a giant in the industry then, and it’s as a giant that he leaves us now.

His and Tim’s unshakeable belief in Robbie Williams, combined with their experience, ambition and passion, made Rob’s domination of the world of pop almost inevitable. And, although their style of management was deadly serious, a sense of almost childlike fun was never far away. I will always remember his big heart and his big posh laugh.”

Enthoven had cut his teeth in the days when the UK music business resembled a small village, seemingly exclusively populated by urbane public schoolboys and cricket-bat wielding maniacs.

And while Enthoven was at ease in the former world, he was also a famously tough negotiator, alongside Clark securing Williams a ground-breaking £80 million deal with EMI in 2002.

“But for David it was never about the glory or the money,” says Collen. “The artist was everything to him. They dealt with the business side brilliantly but for David it had to be about the art.

He defended the artist’s position to the nth degree and that often made things quite challenging, certainly in those glory years, but you look back and go, That enormous ride that we had, he was very much leading the charge on it.”

Enthoven’s regard for artists led him to be a key figure in the Featured Artists Coalition, set up to help protect artists’ interests, and many of the organisation’s executives paid tribute to him.

FAC CEO Paul Pacifico hails him as “a beacon – his incredible power to make difficult problems feel like they were positive challenges was inspirational”.

Co-chair Sandie Shaw says he had “impeccable taste in all things - especially music and innately understood the artists’ viewpoint”. And ATC Management partner Brian Message says: “In an industry built on divide and rule and from a discipline, music management, not known for its collaborative spirit, David stood out as a champion of collective co-operation.”

“He was a giant of a man spiritually, emotionally and artistically,” says FAC board director Lucy Pullin. “His discerning taste and love/patronage of the arts was never-ending. He frequently shone the light of recovery and rehabilitation for so many people.

I will miss his humour, his daily optimism, his 0-90 temper then straight back down to calm again. He listened to music, undiscovered and established, round the clock and even over 70, would go to gig after sticky-floored gig to support his acts or listen to new talent.”

Enthoven’s personal experience of addiction meant he could provide support to many of his artists, with Williams crediting his co-manager with saving his life during his own problems with addiction.

“He understood artists,” says Clark of his old friend. “They could speak to him freely. We both had the ethos that the artist must come first, that’s ie:music’s guiding rule.

But, much more than that, David was the one who was really able to talk to artists about any problem they might have and that was a huge strength to our company.”

He was also an inspiration to many in the industry. Velocity Communications’ Andy Saunders, who handles ie’s communications, remembers him as “very funny and generous to a fault with his time and advice – frankly, if I was an artist I’d have wanted him to manage me”. And Williams’ PR, Murray Chalmers, recalls going to Enthoven for “style advice” when meeting Bryan Ferry for the first time.

“I was a bit worried about asking David such a seemingly trivial question,” says Chalmers, “But he took the matter very seriously and, in that gloriously posh, booming voice he answered immediately; That’s an easy one, old boy.

A bloody good shoe and a coloured sock will never go amiss with Bryan. Of course, David was right - he normally was. His death has come as a big shock and a big blow.”

For a man who was, in Clark’s words, “the person in management who changed the rules” back in the 1960s, Enthoven remained on the cutting edge until the end. He and Clark pulled off one of the blockbuster deals of this year in signing Williams to Sony and Sony Music UK chairman/CEO Jason Iley recalls a recent meeting.

“Six weeks ago I had breakfast with David, which happened to be his 72nd birthday,” Iley tells Music Week.

“He looked amazing – big cool glasses and his recent beard. I said to him at the time, You look like a rock star. He couldn’t have looked better and I was amazed he was 72.

“As usual, we reminisced and laughed louder than anyone in the restaurant – especially when he told the story of the day he was driving down King’s Road on one of his favoured Harley-Davidson’s – again behaving like the ultimate rock star – until he drove it straight into the back of a bus! Here’s to the ultimate rock star – a man who touched the lives of so many and will be missed by each and every one of them. Much love.”

The entire music industry will be missing such meetings, always over good food and always involving many laughs and stories, from now on. Music Week’s thoughts are with Enthoven’s family, friends and colleagues.

But his larger-than-life legacy will live on.

“I remember how many laughs we had,” says Clark. “Yes, we had lots of fights and lots of tough negotiations, but all the time it was loads of fun.”