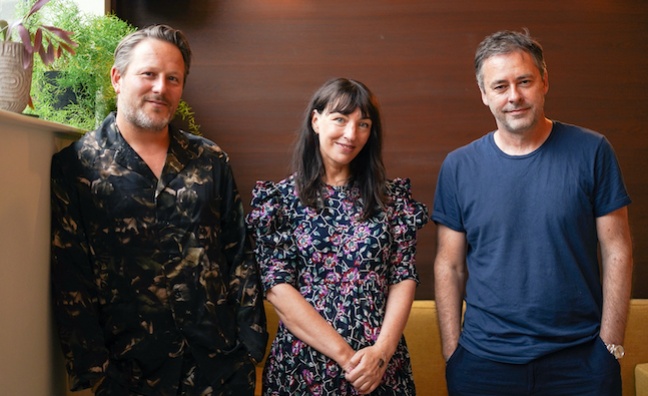 Everybody’s Management team have spoken about the ambitions for the company ahead of their 25th anniversary next year.

The firm, which was founded by Adam Tudhope, has represented artists including Mumford & Sons, Laura Marling and Keane. In 2020, Mumford & Sons parted company with Everybody’s after 13 years. It followed the successful campaign for 2018 US No.1 LP Delta.

The management team are interviewed in the latest issue of Music Week about their reshaped roster and the Everybody’s Music label launch. As revealed in the print edition, hugely experienced former Island managing director Jon Turner has joined Everybody’s as MD, following two decades at the Universal Music label.

“I was in the major label system for 25 years,” said Jon Turner. “I did 20 years at Island, it was a lot of fun – but it’s great to do something different.”

Keane have been with the firm since the start in 1998, including side projects and Tom Chaplin’s solo career. New album The Midpoint made a Top 20 bow this month.

“Tom’s with a new label, he's with BMG for this album,” said Everybody’s general manager Beth Warren. “There’s some new energy and lots to look forward to. He's written a very honest, open album about the midpoint in his life. That's something Tom has done since he started writing his own music - he talks about real life, which I think really resonates with people.”

Indie duo The Flints joined the roster almost a year ago and now have a two-EP deal with AWAL.

During the pandemic, the company took a bold step by launching its own Everybody’s Music label imprint with distribution by AWAL.

Singer-songwriter Sarah Kinsley, also a management client, became the label’s first artist with the release of the single Karma in early 2021. Other acts on the label include George Eve, Jayla Kai and Gaspar Narby.

The King, the follow-up EP by Kinsley, has over 45 million Spotify streams across its tracks. Kinsley, who recently graduated from Columbia University, has 509,000 followers and 10.8m likes on TikTok.

“It was actually born out of quite an altruistic impulse during lockdown,” said Adam Tudhope. “At this stage, it is specifically about working with brand new artists to help them with their first releases.

“We just thought, ‘God, it must be so hard if you're brand new’. We decided it would be really nice to just help someone with their first release, put a few thousand pounds into it, and our expertise, and try and elevate things. We've had some success with it, and we've really enjoyed it, and that's what we're going to keep doing for the time being. We'll see where we go from there.”

“The label’s been truly an international affair,” added Turner. “We've had two US artists, we've had a UK artist, we've had an artist from Switzerland as well. The modern music industry allows you to engage with international artists in a way that you couldn't do before.”

As well as the label and the firm’s core music management business, Everybody’s is taking on individual projects, such as partnering with US-based Mick Management on The Backseat Lovers in Europe.

Baby Queen has 769,000 followers and 18m likes on TikTok, as well as 790,000 monthly Spotify listeners. Colours Of You, which featured on Netflix series Heartstopper, has more than nine million Spotify streams.

Baby Queen supported Olivia Rodrigo on tour in the summer.

“She won a lot of fans supporting Olivia Rodrigo across Europe,” said Tudhope.

Turner said that new artists, such as Baby Queen, have finally been able to make a full impact with the return of touring following the pandemic

“Baby queen is a good example of that,” he told Music Week. “She's fantastic live, she connects with every audience she ever plays to, and she's just been able to show that this year. She had a show pre-lockdown, which essentially got her her agent and Polydor deal off the back of that.”

Jack Garratt secured a second Top 10 album in 2020. He has since left Island Records for Skint.

“He’s making dance music and that's why he's signed to Skint,” said Tudhope. “It’s dance-pop music. His shows already had big electronic and dance elements to them, and this project perhaps pushes it as far as It can go in that direction.

“He supported Bastille recently on a European run and they sounded great. It sounded absolutely perfect alongside his other songs. He’s an absolute force and incredibly talented, a fantastic songwriter and amazing singer. The issue with Jack is just that he's so good at everything.”