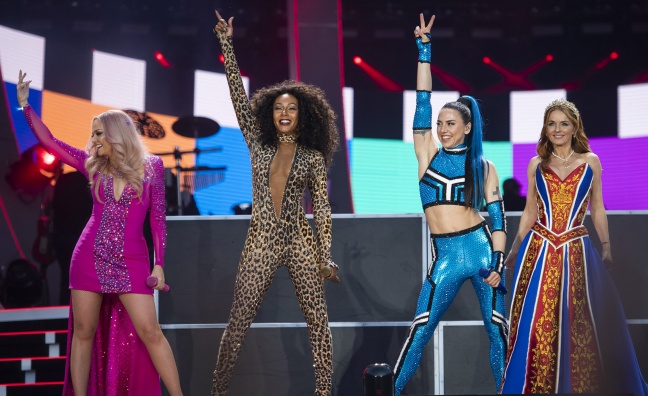 The tour has blazed a trail through Dublin, Cardiff, Manchester, Coventry, Sunderland (pictured), Edinburgh and Bristol, with Sporty, Ginger, Baby and Scary (but not Posh) reminding everyone who attended of what a true global pop phenomenon looks like, while Girl Power nostalgia has sent the group’s Greatest Hits album back into the Top 20.

And what of the powerhouse behind the scenes? XIX Entertainment boss Simon Fuller, who master-minded the Girls’ initial ascent, and now partners with Modest!’s Richard Griffiths and Harry Magee on the act, has already given us his verdict on the tour’s first night at Dublin’s Croke Park and told us why there won’t be a Spice Girls biopic (yet).

Fuller is back in town for the Wembley shows so he took the opportunity to sit down with Music Week to talk about the reunion, his new pop project Now United and why today’s pop superstars don’t quite cut the mustard compared to the Spice Girls…

Why do you think the tour has been so successful?

“Girl Power doesn’t go away, it just gets stronger. With the need for it this year, just as a planet and certainly from a British point of view, it felt the perfect tour at the perfect time. I was talking with Blackpink and they were saying what a big influence the Spice Girls were for them. It’s a global phenomenon, a moment in time, three crazy years when everyone was swept away by Girl Power – and those moments last for generations. It’s very special.”

“Exactly. It transcends music, it’s so much more. It’s a pop culture moment and music is at its heart. Music is so powerful, I love music more than anything else. It carries a message and captures a moment in time better than anything else.”

How has it been being back in the middle of it all?

“If I was living in England it would have impacted me more! But I live in LA, and bringing Richard and Harry in has been advantageous for me. I get all the good stuff to be honest! So for me it was just really fun revisiting lots of wonderful memories. Same for the girls, it takes you back to that beginning and it’s very nostalgic and special. I’ve had a ball.”

How has it been working with Modest?

“I love them. I’ve known them for forever, literally! We’re cut from the same cloth. They’re obviously totally embedded in music and I’m television, fashion and sport. But they’re so slick and so at the epicentre of the music world that they breeze through the day-to-day stuff, the functionality of these major tours. We’re playing to our strengths and it’s very complementary.”

The Spice Girls’ videos are being remastered in 4K quality. Why?

“The future is going to be so much more visual. The new pop group I’m working on, Now United, is really visual. Merging music more into visuals and more into story-telling and more into broader versions of content. If you really embrace the visual world and technology, with virtual reality and all of these things coming hard and fast, music is going to be right in the middle. The future is so exciting. People are still trying to figure it out and see where it all fits in, but it’s all going to come good again.”

Will this reunion be extended?

“That is really down to the Girls. We can kick into gear at 24 hours notice. It was important to them to get back together and tour Britain because there’s such a connection. I’d say it’s 50-50, if it happens great, if it doesn’t then it’s all been good.”

How is your new pop project, Now United, shaping up?

“I went out of my way to rethink what music can be and how I can be at the front end of whatever’s going to come along. Simply put, it’s a group that is so integrated to their fans that it’s almost a seamless divide. We’re exploring that interaction and connectivity and it very much lives on video. At the moment it’s happening so organically that we haven’t done anything in terms of marketing. They’re an arena-sized band in Brazil, India is exploding and the Philippines. In Korea we’re doing something with a K-Pop group, Russia is going well, all the countries that no one thinks about necessarily with pop music are really opening up for us. We haven’t even started thinking about Europe or America, I just want a story that’s different and intriguing and then see where that takes us.”

“And that’s what I love. There are so many things about the music industry that are thrilling and I’d say that’s the No.1 thing. You can become a worldwide star from anywhere now and that’s fantastic. My biggest thought about music nowadays is there is so much good music. I can never remember so many brilliant artists. It’s almost sad because, in past decades, some of these bands would be massive and now they’re just another band. I’m not complaining but it must be quite frustrating if you are one of those great bands trying to break through.”

Could the business end up bigger than ever?

“I really believe it. I’m extremely optimistic about the music industry, I really am. It’s going to come from the artists as well. I don’t want to disrespect record labels but I think the artists are going to get more and more innovative, more and more pioneering, trying different ways to connect to audiences all over the world. That’s what’s going to do it. Music is in the middle of everything, it’s so much more than just sitting in a bedroom and coming up with a pop song. The next wave of artists are going to be the ones that truly break through in a massive way. They’ll be digital savvy and won’t have any preconceived notions of anything; instead of being limited by what the music industry expects, it’s the opposite. You can do anything.”

But will any of them be as big as the Spice Girls?

“Well, I do miss massive global phenomena. Watching the Girls reminded me, when it happens, it’s so culturally awesome. And it’s something we really lack now. When you think of the acts we might consider the global powerhouses, and I’m not going to name names, but they’re not that impressive. The newer ones, they’re kind of culturally shallow and frankly they could disappear at almost any second with a couple of bad songs. To have a powerhouse of a group where it doesn’t matter about the next song or the next number of streams… There’s a real lack of them and it’s not through a lack of quality. I don’t know if it’s because the music industry doesn’t get behind them as much as they used to globally, or because they’re so geared towards, ‘This probably isn’t going to last very long, so let’s not throw everything at it’. But I do think, with this next generation, things could change. It hasn’t happened, frankly, for 10 years. And that’s an opportunity. When that starts happening then you’re really going to see the muscle and power of the music industry. Think of those phenomenal moments with Prince or Michael Jackson or The Beatles, so culturally powerful that they dominate the news, never mind just streaming services. That just doesn’t happen anymore. But it will, for sure. It’s coming back.”