How M Huncho is shaking up the UK scene 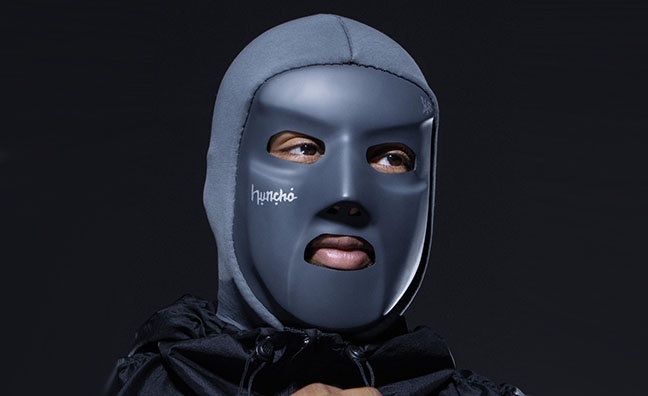 M Huncho’s co-manager has told Music Week that the rapper represents a brand new propostion for the UK scene.

Signed to Island by senior urban A&R manager Adele White, the masked rapper is from Brent, North London, and hit No.5 with new mixtape Huncholini The 1st last week. It sold 12,773 copies, 1,502 of which were on CD.

Several of the project’s 13 tracks have more than a million Spotify streams, Thumb (feat. Nafe Smallz) has the highest tally at 7,946,629. M Huncho’s most successful track according to the Official Charts Company is Tranquility, which has 109,978 sales.

In the new issue of Music Week, we speak to White and co-manager Kwabz Oduro Ayim (who co-founded Mixtape Madness and works alongside Niall Bentil) about the campaign they’re building.

M Huncho’s attention to detail, ambition and artistic style, they say, set him apart. Here, in an extract from our interview, Oduro Ayim sheds some more light on how the team operates.

What’s the story behind the mask?

Can you expand on that?

“In the early stages of his career, he was automatically put in the bracket of a drill artist or a drill rapper. He’s been very adamant that he’s an artist with a unique sound and appreciates music from lots of different backgrounds. Many people ordain him as trapwave, that’s the closest box to him. But he’s always trying to evolve his sound.”

He doesn’t do anything just for the sake of it, and we’re seeing growth as a result of that

What’s he like to work with?
“His mindset encourages everyone around him to be more innovative and creative. There was a whole concept behind Utopia and the first breakthrough project, the 48 hours EP, when he created a tape within 48 hours. There’s always a creative concept. He doesn’t do anything just for the sake of it, and we’re seeing growth as a result of that. We’ve been committed to a growth story, we’re not too fixated on his chart position or how many views he gets on one particular video, we’re more interested in how he’s growing as an artist from one project to the next."

How do you judge success then?
“It’s not about the fact that the new tape finished at No.5, it’s the fact that he’s upping his sales figures each time. The success story is that level of growth. When we started managing him he performed at a 300 capacity venue, then he moved to 800. Printworks was 4,000, this time, he sold out O2 Academy Brixton in one day. That’s how I measure success.”

Subscribers can read the story in full here. To subscribe and never miss a music biz story, click here.