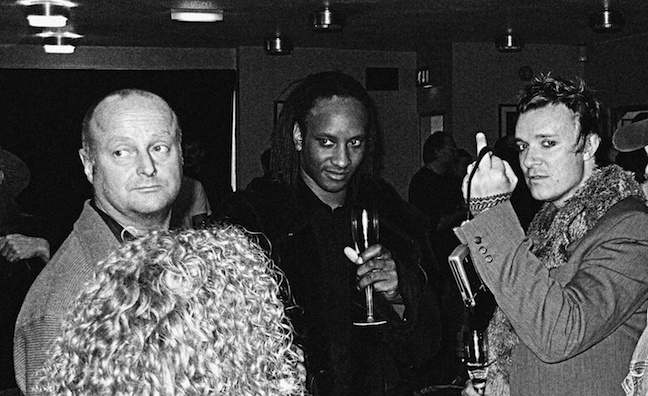 The Prodigy’s original manager, Mike Champion, has died aged 62. The current issue of Music Week includes a tribute to Champion, who died on December 31.

Industry figures including Guy Moot, Simon Moran, Richard Russell, Nick Halkes and The Prodigy’s leader Liam Howlett have shared their memories of the man who steered the rave act to global success and worked closely with the band for two decades...

“You were a fiercely loyal and dangerous pirate, manager and friend. You came with us on a mad journey and we took on the world together. You were dangerous, always generous and you both terrified and charmed people in equal measure. You always had my back, you could never be replaced and I will miss you my friend.”
Liam Howlett, The Prodigy

“Mike was unflinching in his commitment to deliver the band’s vision. A maverick who lived life to the full and brought colour to an industry that isn't quite so colourful these days.”
Nick Halkes, MD, Incentive Music Management, co-manager of The Prodigy

“I teamed up on the management side with Mike in ’94 and witnessed first hand the maverick manager he was, navigating the chaos of the early rave days onwards, setting a standard for the emerging scene as a true pioneer whilst also being a rebel at the same time.”
John Fairs, of JCF Management, co-manager of The Prodigy

“Mike Champion was totally committed to making The Prodigy a huge worldwide success - without compromise. Liam had a vision and Mike helped him execute it – sometimes by creating chaos. Mike and I had different approaches but we shared a total belief in what The Prodigy were doing. Neither Mike, Liam nor myself felt there were any rules. We were not interested in what the music industry dictated.

“Keith and Keety are such beautiful people and performers. And John Fairs was always incredibly solid and reliable running the live side. There was perfect balance. Throughout the ‘90s, XL was dedicated to The Prodigy, but I was making it up as I went along. I had no experience or qualifications. A more conventional manager might have questioned my approach and some of my ideas; but Mike had a wild energy and that created space for everyone to act on their instincts. There was no second-guessing.

“I’ve been reminiscing with different people who worked with Mike about the unbelievable times we had and some of the outrageous things that happened. The perfect team at the perfect moment, we wanted to upend things, and we did. I doubt there is anyone like Mike operating at the top level of the music business anymore. RIP.”
Richard Russell, head of XL Recordings

“Mike was a true character, a rock star in the electronic music world, every deal was fun and every show was legendary.  They don’t make them like Mike anymore, he was one of a kind and someone who will be truly missed.”
James Barton & Scott Barton, Cream

“Mike was a one-off. Having made a living selling squid from the Falklands to the Japanese, dealing with the music industry presented him with few challenges. He could smell the bullshit from a mile away. The number of times he and the Prodigy said ‘no’ when the convention was to say ‘yes’ was remarkable. Each time their stock would rise higher until they became one of the biggest acts in the world. ‘No’ to the US booking agents offering to do the live work for half the commission charged by the agent who still represents them today – result: first UK band to break the £1 million headline fee barrier. ‘No’ to Sony when, after the two-single deal on XL came to an end in ’92 the major offered over £500,000 - a massive deal at the time. They stayed with XL for a fraction of the money and Fat Of The Land sold 12 million-plus. A true original and one of the biggest-hearted men I have known.”
Paul Spraggon, partner, SSB, The Prodigy’s lawyer since 1991

“I first met Mike backstage at Liverpool Uni for a Prodigy gig in the early ’90s. I clearly remember him looking me straight in the eye and telling me they were going to be one of the biggest bands in the world and would travel and tour the globe. Mike had an incredible gift of making you believe what he was saying. Concorde [International Artistes] then worked with Mike and the band from the ’90s through myself, Richard Smith and then my father Louis Parker taking the reins. They forged a fantastic friendship and partnership that indeed went on to take on the world as previously promised. After my father passed away in 2000, he again looked me in the eye and said: ‘It’s yours, till you fuck it up’.

“Mike was equal parts pioneer and pirate. We had some legendary days and nights and fun along the incredible ride. If ever a rulebook was written, he would duly wind down the window of life and toss it out and carry on somewhere close to 100mph. Rest easy Mike, there probably won’t be much peace involved.”
Solomon Parker, Coda Agency

“He was everything you want in the music industry, a proper character. He was a rebellious, forthright manager but incredibly driven and hard-working. He didn’t suffer fools gladly. One minute Mike was having meetings with Deconstruction or XL, the next he was in an aircraft hangar in Aberdeen arguing with the promoter. Mike really handled everything from the high captains of industry to dodgy rave promoters around the M25. That was the time, it broke the rules, so it was very exciting. I remember him very fondly. He was uncompromising, it was real business. He was always flamboyantly dressed. He was a colourful character but with a really good sense of right and wrong, and the ability to say ‘yes’ or ‘no’. It sounds silly but so many people don’t call the shots. He was more than able to handle himself in any situation.

“Liam doesn’t love the limelight so I think Mike was always front and centre in terms of steering that band and steering its success. He understood Liam and he understood the process, which would take a long time. I think he knew Liam better than anybody. In his own slightly crazy way, he taught me a lot. Mike was like a punk rave entrepreneur.”
Guy Moot, president, worldwide creative and UK MD, Sony/ATV

He was a rebellious, forthright manager but incredibly driven and hard-working

“They probably were the [first dance act] to take it into arenas, which they did quite quickly over a couple of years. Mike had a big role in that, he was there from the start and he had a vision, he was very determined and very ambitious. He was pivotal to it. Obviously they were a great live band and Liam’s a hugely talented songwriter and musician as well. Mike totally realised that and was very determined to succeed at the highest level. It was interesting when they supported Oasis at Knebworth, they went down a storm to a rock crowd of 120,000 people.

“Mike was so passionate and full of enthusiasm, he was infectious really and had the belief in the vision, the talent of the group and the music that Liam was creating. It’s a cliché but he was a larger-than-life character, good fun, upbeat. He was a nice guy, I liked spending time with him. He was a bright guy as well, he was a good person to be around and he was very loyal. I have very fond memories of working with him.”
Simon Moran, MD, SJM

“He was incredible, he was a brilliant manager, he was a wild man – he was scary but he was very loyal as well. As a manager, he had that knack of being in the right place at the right time. He really respected the people he worked with and people loved him. I remember the first time I ever took my son to a festival was to see The Prodigy play at Reading. He was 12, and Mike was so gracious to both of us. He gave my son a T-shirt and drumsticks from the gig – for a first ever festival it was mind-blowing for my son.

“I remember when we were doing the deal [to sign to Cooking Vinyl]. On the one hand, I couldn’t believe that we were signing The Prodigy, it was a bit of a dream. Every label wanted to sign them. I remember a conversation with him saying there are only two problems with the deal and they are Universal and Warner. He trusted us and his instincts. He felt we had genuine passion and could do the job. He did shake things up.”
Martin Goldschmidt, founder, Cooking Vinyl

“Mike can only be described as a force of nature. Quite often you waited an age for him to arrive and then he left leaving chaos and confusion, but always in a good way and always putting The Prodigy first and foremost.”
Rob Collins, MD, Cooking Vinyl