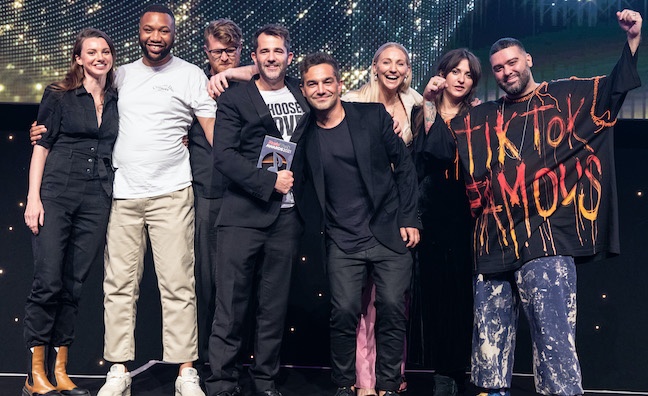 Tap Music’s Ben Mawson and Ed Millett celebrated a double win at the Music Week Awards 2021, including retaining the Manager Of The Year trophy.

The company also won for their livestreams by Dua Lipa, Dermot Kennedy and Ellie Goulding in the new category Live Music Innovation Of The Year (Event/Series). Click here for their insights on livestreams, which they shared at this year’s Music Week Tech Summit.

The Music Week Awards recognised successful campaigns in 2020, a challenging year for artists trying to release records amid the Covid pandemic. Yet Tap, Dua Lipa and Warner Records pushed ahead with the release of Future Nostalgia on March 27 as the UK went into lockdown - a move that paid off.

“We did it because we’ve just got an amazing team of staff, who carried on working through thick and thin,” Tap Music co-founder and co-CEO Ben Mawson told Music Week. “And it’s not just been Dua. It’s been Ellie, it's been Dermot, it's been all of the new artists who have been trying to come through in very difficult times. It's good to come out of it now, and we’re looking forward to more success.”

The easing of restrictions also meant a full return for the Music Week Awards at Battersea Evolution last week. Tap Music won the Manager Of The Year award last year without a ceremony to attend.

“We were like, ‘What happened last year?’. Oh yeah, it was an email interview,” said Ed Millett, co-founder and co-CEO. “But as you can probably tell, Ben and I absolutely hate public speaking, so there are pluses and minuses on both sides.”

The ceremony was also a chance for the management duo to bring their mothers along, just in case there might be a chance to celebrate a win.

“It was really fun,” said Mawson. “They’ve been to a few things before. They’ve not drunk too much, but you have to watch them! They’re very proud.”

Dua Lipa has just announced the North American leg of her Future Nostalgia tour from February to April 2022. It includes her first headline shows at Madison Square Garden in New York City and Forum in LA.

Eighteen months on from its release, Future Nostalgia is still going strong and was the second biggest album of the year at the halfway point of 2021. Dua Lipa’s second LP now has UK sales of 451,221, according to the Official Charts Company.

Ben Mawson was there to toast both of her victories at the BRITs and the Grammys.

“She works very hard and we all work very hard,” said Mawson. “She's brilliant, but we're lucky that we've got an amazing roster of brilliant artists and it's been growing.

“We've started working with some other amazing new talent, including Noah Cyrus. We're really excited for the future and we’re expanding as well.”

Tap has operations in London, Berlin, Sydney and LA, and it’s now ramping up activity in the US.

“I’ve just moved back to LA so our focus is going to be there for a while,” Millett told Music Week. “As we’re coming out of the pandemic, we’re going to be doing as much as we can over there.”

The next big release for Tap will be Lana Del Rey’s Blue Banisters, via Polydor and Interscope, on October 22. It follows the chart-topping success earlier this year for Chemtrails Over The Country Club, which increased week one sales for the former Music Week cover star.

“She's an incredible artist,” said Millett. “She's a once-in-a-generation artist, and she will continue to be.”

Mawson also underlined the ambitions for Tap Futures, the not-for-profit arm that launched a year ago.

“It’s hugely important,” he told Music Week. “It’s a fundraising entity that allocates money globally. What we want to try and do is just give as much opportunity to people that maybe ordinarily don’t get that opportunity in music - and actually, it’s not just music but sport and fashion too.”

Click here for all the winners at the Music Week Awards 2021.