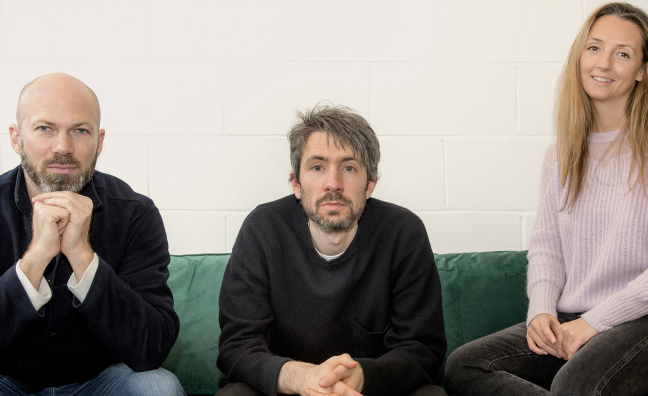 Songwriter Rick Boardman has teamed up with TripTik Management’s Will Gresford and Holly Lintell to form a new label, management and publishing company, Matter Music.

Keith Urban & Pink’s One Too Many, Zedd & Kehlani’s Good Thing, James Blunt’s Cold and Back To You’ by Louis Tomlinson and Bebe Rexha are also under its umbrella.

Holly Lintell, director of Matter Music, said: “We are so thrilled to be working with The Nocturns, they are already making great waves in the writing world and have so much exciting music to come!”

Jake Tasker of Covert Talent, The Nocturns’ management company, said: “We’re very excited to be working with Matter Music. They were able to offer us a much more personal approach to a publishing deal, that we felt we couldn’t get anywhere else. Even before signing, Rick, Holly and the team were already adding a great deal of value to what the boys were doing, so it felt like the natural home. Matter’s track record speaks for itself and we’re very proud that Joe and Charlie are now part of the family.”

Elsewhere, Matter Music has recently extended its publishing deal with Kobalt and appointed Victoria Becks as head of A&R.

Alison Donald, Kobalt’s head of UK creative for publishing and AWAL said: "Having partnered with Holly, Will and Rick since the day they launched Matter Music five years ago, Kobalt is delighted to have extended our relationship again with them. In a relatively short time, they have proved themselves to be a great source of song-writing talent and a hotbed of outstanding songs. Their hit ratio has been exceptional too, but aside from the commercial success they have achieved, Matter Music, and all their writers, are wonderful people to work with. We look forward to being part of their continued success in the years to come."

Will Gresford, director of Matter Music added: “We’re delighted to have extended our deal with the amazing Kobalt team. We love working with their teams around the globe and look forward to many more years of success together. ”

Rick Boardman said: “Although it’s been a year like no other, it’s been a really exciting time for Matter. We’ve had some great releases from the Matter catalogue and as the team have mentioned, we’re really excited to have signed The Nocturns. We’ve extended our A&R team – appointing Victoria Becks as head of A&R. Victoria is a fantastic addition to Matter Music with a wealth of experience and has been part of a number of successful projects over the past few years. She's immediately elevated the publishing company and we're excited for her to add her vision and skills to the Matter team, working closely with The Nocturns, as well as our other signings Sakima and members of The Six.”

Matter Music has studio premises in a Georgian house in Gee Cross, Greater Manchester, and Boardman said it’s rural location is key to the company’s success.

He said: “Being in Manchester enables us to escape from all of the clutter and focus on what really matters, writing great music. We have an incredible property, a 13 room Georgian coach house with multiple studios, along with accommodation for artists and writers to stay. Manchester obviously has a great cultural heritage and we feel that carries across to the music we write, where we encourage everyone to add identity and character, rather than just making generic pop for the sake of it. We also act as a bit of a gateway between young musicians up North and the industry down in London.”

Pictured above: (L-R) Will Gresford, Rick Boardman and Holly Lintell