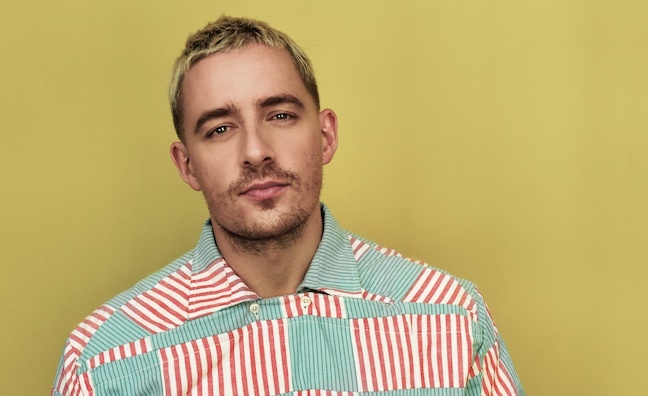 Tap Music co-founder Ed Millett has revealed the long-term ambition to take Dermot Kennedy to stadium status as the singer-songwriter prepares to release his second album.

Sonder, the follow-up to Kennedy's 2019 debut Without Fear (297,373, OCC), drops via Island on November 18. Kennedy recently previewed the release with the track Kiss Me (69,303 sales), co-written with Bastille's Dan Smith, producer Koz and hitmaker Steve Mac.

The BRIT Award nominee has also just announced his first UK arena headlining tour, which will see him perfom to more than 120,000 fans, starting at Glasgow's OVO Hydro on March 31, 2023 and finishing at The O2 in London on April 14. Earlier this year, Kennedy topped the bill at the 70,000-cap Electric Picnic Festival in his native Ireland and will headline two nights at Dublin's 40,000-cap Marlay Park next June.

Ed Millett told Music Week that the 30-year-old's live business has been the "driving factor" in his career.

"It's how he's built his following from the ground up," said Millett. "In Ireland, he's already done bigger shows than The O2, so he's not going to feel green in that space. It's just about how we can take the production to the next level and he's ambitious to do something that feels more of an experiential show. He is very interested in theatre, particularly experiential theatre, and how you can incorporate that to make it a more immersive experience."

The LA-based manager added that helping the star headline stadiums was "definitely the long term goal".

"He's at that level in Ireland already - we've got those two Marlay Park shows on sale and they're 90% sold out. That's nearly 80,000 tickets in Dublin sold in a week so, yes, it's an ambition," he said. "We will do stadiums in Ireland first."

Dermot Kennedy has been busking across the world in the run-up to Sonder's release in cities such as Mexico City, Toronto, Chicago, Boston and Philadelphia with his own branded Sonder Street Sessions, with each stop serving as a fundraiser for local charity. Funds have been raised for the Shawn Mendes Foundation, The People’s Music School (Chicago), The Unison Fund (Toronto), among others.

Here, in a Q&A over Zoom from Los Angeles, Millett delves deeper into the Sonder campaign, Kennedy's popularity in his homeland and why he is very much an international concern...

Without Fear is on the brink of platinum certification in the UK, how did that campaign compare with expectations?

"We're super-happy with the campaign. With everything we've done, there has been no skipping steps and no hype. He wins by being authentic and genuine. He affects people, they fall in love with his art and they stay on board. The album campaign is indicative of that. We had our moments with various singles, but he never wanted to have one song that defined him. It was a really long campaign - nearly three years - and that's the pace at which he moves. That's good because it's building. He's building solid bases everywhere."

To what extent has he grown as an artist?

"When we met him in 2016, he put three songs out: After Rain, Shelter and an early version of An Evening I Will Not Forget. And After Rain hasn't really changed, but we were like, 'Why don't you just give us a playlist of what you're listening to?' - expecting that to inform what direction we were going to go. Anyway, he sent back a playlist and it was only hip-hop, which was not what I necessarily thought he was going to send, so we were like, 'Why don't we try working just with a hip-hop producer, or someone who's loosely in that world, and see what happens?' He was excited by that idea, so he worked with Koz [Stephen Kozmeniuk], who we also manage as a producer, and he really enjoyed that process. He reworked some of those older songs like An Evening I Will Not Forget with Koz and it became a much tougher production and more dynamic. It was just a chance to go, 'Nothing is decided yet, let's just try lots of things out and see what is unique to you, rather than just stick to what is necessarily obvious.' He's such an emotional songwriter and a storyteller, so it's trying to walk that line of having those flavours in there, but without them dominating. The lyric and the emotional connection are the central pillars."

How does Sonder compare sonically to what came before?

"It's a much broader sonic landscape. Without Fear was tying eight years of disparate ideas and songwriting together in a production thread that told his story about who he is. Sonder is more disciplined songwriting that pushes out into different production directions that touch all the things he loves. He wrote Kiss Me with Steve Mac and Koz produced it, and that is probably as pop as he's ever going to get. He is really attached to that song, but he's worked with some of the same people he worked with on Without Fear. He narrowed that group down to the ones he had real connections with. Koz is on there, he worked with [producer] Emile Haynie on one song, which he was excited about because that's our focus track on the album release and it leans more into his love of hip-hop in the production. But Innocence And Sadness is a live take of him on piano, so it runs the breadth of all the different things that he does."

What sort of platform has Without Fear given you for album number two?

"With your first record, it's a combination of years of your life and ideas cobbled together - I think there were songs on there that were eight years old at the time. Then the second one is written within a timeframe with a smaller group of people and is more focused. He's learned so much about songwriting in that intervening period, he's opened up so much as an artist and he's dropped his guard in a lot of ways. He feels he's moved his songwriting on, so that he can connect with more people and that's his ultimate ambition. He's super-ambitious and works really hard. The album's called Sonder for the reason that is he's not an ego-driven person, he's interested in other people's stories. That's why his live shows are so connected, because from everything he learned from busking and street performance, and how to win people over. It's about moving beyond that first album stage and getting to a broader audience. He's just been to South America and Asia for the first time and he's not going to stop with any of that, he ultimately wants to be an artist of not just great success, but somebody that has a great catalogue and is meaningful in history over a lifetime. He wants something that is solid and he'll grind it through every step."

Given how huge he already is in Ireland already, how do you balance that with helping him reach a similar status in other territories?

"Part of why we started working together is that our set-up is global. I'm [in LA] and we have our London office and we approach our artist development as a global exercise. We don't focus on home territory first like a lot of places do. With Ireland being a small country, it's very easy for it to run away from you and become big very quickly, and then get stuck in this cycle. Dermot sees history littered with Irish artists who can't do anything outside of Ireland and he was fearful of that. So without wanting to disrespect his home country, we're going to show face but try and keep a lid on it and allow it to grow at the pace of everywhere else. The UK [is his next biggest market] and the US has been slower, but is getting there now."

How is the Sonder campaign shaping up and what's the plan from here?

"It's such an interesting period in history with the chart nuances and pre-order battles you have to line up. It does feel like it's reached an absurd level, but we're in pretty good shape. We had a little fright with Shawn [Mendes] cancelling the tour that we were on, which was essentially our North American set-up for the album. We had two months on the road with him and suddenly that wasn't there, so we jumped straight into the busking stuff and that's been an amazing experience. We just announce it on socials and see what happens. We've had 4,000 to 5,000 people turning up in Austin, Toronto, or wherever at three hours' notice. We've partnered with TikTok and Instagram and raised an amazing amount of money for charities in each city. In Brazil, we did a fundraiser with a nonprofit called Favela Brass, which is run by an English jazz musician who moved to Rio years ago. He essentially sources brass instruments and teaches kids to play. Dermot got to meet all these kids and they backed him on a busk and played some of his songs and we raised a bunch of money for them. He's getting to meet people and hear their stories, which is the essence of the album. So in a way, by accident, it's been even better than it was going to be."

How does Dermot cut through during this incredibly busy time of year?

"It's an impossible question to answer, right? Because all you can do is be always on and true to yourself. Like I say, it's not a hyped cultural lightning rod-type project. For Dermot, it's about the grind. It's the going out and constantly performing and connecting with people, both on socials and in the real world. I've never worked on a project where someone has travelled in the way that he has over this campaign set-up period. He's going from Brazil, to Seoul, to Singapore, to Malaysia, to Kuala Lumpur back to America, then back to the UK and then over to France and Germany. But he wants to get to as many places as possible and connect with as many people as possible. So he's very fit and very disciplined. We've got full diaries up to Christmas and then he's on tour for a big chunk of next year."

Are there any specific plans for the Christmas market factored in?

"He really loves Christmas and he wants to do a Christmas song, but probably not in a major way this year. He did Driving Home for Christmas for Apple last year and the exclusivity on that finishes this year, so it will be released to all DSPs. He's keen to do an annual Christmas charity show at some point, but we're in the thick of album set-up right now so it won't be this year."

To finish, what would represent success to you with this campaign?

"It's probably an obvious thing to say but it's confirming success in the markets that he has had a relative amount of success in, so Ireland, UK, Germany, the US and Canada, and then opening up new parts of the world. He wants to be as big as possible, but without losing the essence of who he is as a songwriter."