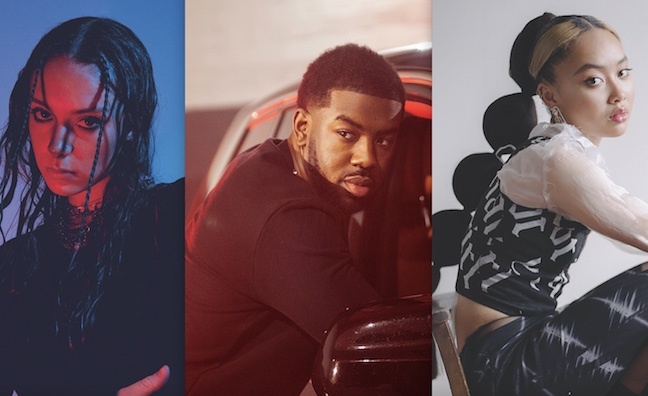 BBC Radio 1’s Brit List will now guarantee a TV performance for all the selected artists, Music Week can reveal.

The first names this year for the station’s breaking artist programme have also been unveiled – Griff, Holly Humberstone and Tion Wayne.

Griff made the Top 50 this year with her single Love Is A Compass (Warner Records), while Atlantic-signed rising rapper Tion Wayne has had a run of chart success with artists including KSI, Dutchavelli, Stormzy, B Young, Rudimental and Mist. Holly Humberstone, who’s signed to Platoon, took second place in the BBC Sound Of 2021 poll.

Brit List artists have previously had a three-single playlist commitment, alongside additional support from the station. In a significant boost for new artists, Radio 1 has now secured agreements with TV counterparts on featuring Brit List acts on shows such as Later… With Jools Holland and the festive editions of Top Of The Pops.

“I'm delighted that we've been able to find a much more joined-up approach with TV and will be able to now bake in a TV opportunity for our Brit List artists,” Radio 1 and 1Xtra head of music Chris Price told Music Week. “We're now able to say that, as well as your playlist, Live Lounge and Big Weekend opportunity, we can also offer Brit List artists a TV debut.

“It might be a performance on Later… with Jools Holland, it could be performing as part of the BBC Glastonbury coverage, it might be Top Of The Pops. So we're working with all of our TV partners right across the board to make sure that there is a home for these artists, we're making our TV partners part of the decision-making process to ensure that it can all work for everybody.”

Price explained why he’s been working to upgrade the Brit List opportunity for breaking artists.

“Brit List is an amazing opportunity and, in terms of radio, it really is like Willy Wonka's Golden Ticket knowing that you're going to get the best part of a year's worth of support from a national broadcaster – that's an amazing thing to be able to take out into the world,” he said. “I've been trumpeting that fact for a few years now.

“But I’ve felt for a long time that we have amazing TV opportunities on our doorstep that we could very easily be offering. I'm just delighted and it speaks to this more joined-up way of thinking that Charlotte Moore, the BBC’s new chief content officer, is keen to bring about. With Lorna Clarke, controller of pop, whose remit extends across all of the pop radio stations and also into music TV, structurally the BBC feels much more set up to have a more joined-up conversation – and that can only be a good thing for artists.”

Music Week has reported on the growing importance of Later… With Jools Holland for artists during the pandemic. It will now have an enhanced role in helping to support UK talent.

“I've been working closely with Jan Younghusband [BBC Music TV head of commissioning] for some time now,” said Price. “[The Brit List partnership] came about because I reached out to [executive producer] Alison Howe at Later…  – I've always had the utmost respect for Alison, I've always thought her taste in bookings was pretty impeccable. I've learned about some of my favorite artists from seeing them on Later… With Jools Holland. Our ambitions are aligned in that we just want the best for artists.”

Price acknowledged that the TV partnership will now be factored into their decision-making on the Brit List artists.

“It's going to require us to work a little bit differently, it's going to require us to align ourselves a bit more closely with Later… With Jools Holland, which is probably the one music show that offers the most opportunity to Brit List artists,” he said. “We had our first meeting with Alison, and it was a very artist-centric conversation where all sides were just committed to doing the best by new artists at the right time.

“There may be times when Alison will want to book an artist before they're ready to go on Brit List. There may be artists that we will put on Brit List that Alison might not otherwise have considered. There are also the independent production companies that produce TV shows for [the BBC]. We will find a home for every Brit List artist that we add to the list.”

Price noted that Later… has thrived during the pandemic as a platform for new artists.

“The new format that Jools has come up with – had to come up with because of Covid – I think it's really changed the way that TV performances can be done,” he told Music Week. “I discovered Berwyn on Later… playing in his kitchen on a keyboard that was propped up on an icebox with an audience of one – his mother. There was something about the intimacy of the performance that helped me to understand who Berwyn is as an artist. That was a really unique performance – seeing into artists in their own homes, or their own creative space, is a pretty unique thing.”

With the pandemic removing touring opportunities, Price said that TV exposure would be even more valuable.

“Here we are nearly a year into lockdown, and new artists have been robbed of the one thing that helps them to establish a fanbase the most quickly,” he said. “They’ve had the live rug ripped out from underneath them. So it's just even more important to try and offer a rounded view of artists that we feel audiences need to know about. So, yes, it's more than just hearing them on the radio.”

Recent successes for Brit List alumni include a No.1 album for Celeste and a Top 3 finish for Arlo Parks’ debut LP.

“Both Arlo and celeste landed debut albums in the same week,” noted Price. “The more joined-up we can be as radio stations and TV channels, the better it is for artists like Arlo and Celeste.”

Radio 1 will also work alongside the other BBC stations in championing new music and Brit List artists.

“It’s really just about making sure that we’re coming at it from all angles,” said Price. “Radio 2 are huge supporters of Celeste – she had Album Of The Week and here she is celebrating a No.1 debut album.

“It’s not just about being joined up with TV, but also being joined up as a division of popular radio stations, so we're exchanging information with Jeff Smith and his teams at Radio 2 and 6 Music. We try very hard to think in the round, more than maybe we have done previously.”