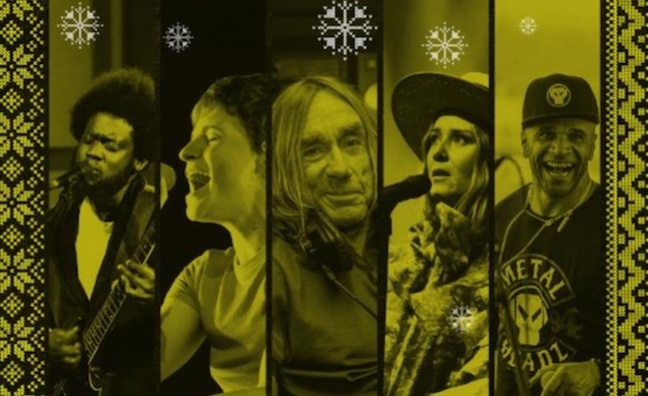 BBC Radio and BBC Sounds have revealed their Christmas line-up of shows, podcasts and streams, including artists such as Yungblud, Goldie, Gary Barlow and Christine And The Queens.

The pop networks will come together at 5pm on December 1 for a festive simulcast. BBC Radio 1, 1Xtra, Asian Network, Radio 2 and 6 Music along with Radio 1 Dance will air The BBC Radio Christmas House Party.

This year the all-important Christmas No.1 will be revealed on Christmas Day itself between 2pm and 4pm by Katie Thistleton.

Other highlights include HER, Ivorian Doll, Ghetts, Big Zuu, Deno, Ray Blk and more as guests for 1Xtra’s 12 Days Of Christmas With… takeovers. Radio 2 has an hour-long special with Dolly Parton and a celebration of the broadcasting career of Annie Nightingale, while 6 Music has artist mixes from Michael Kiwanuka, Goldie, Christine And The Queens, and more.

Charlotte Moore, BBC chief content officer, said: “This Christmas, more so than ever, we’ve created perfect soundtracks that are full of festive cheer and stardust, celebrate our most loved shows, make space for reflection and tell extraordinary stories both real or imagined. In what’s been a difficult year, millions of people have turned to our stations and Sounds for company through long periods of isolation and so we want to give our listeners schedules filled with special treats and surprising guests to celebrate the festive season.”

Here are some of the festive highlights across BBC Radio and BBC Sounds.

Available on BBC Sounds from December 17

Yungblud chats to his friend, musician and king of Youtube, KSI. They share stories about fighting against stigma they’ve faced in the music industry, how social media has changed the game in connecting with their fans, and what it will mean to be an artist in 2021.

On BBC Sounds this Christmas, the Christmas With... mixes (available December 1) will see stars share festive music with listeners to accompany them over the season,  including Jess Glynne, Paloma Faith, Dizzee Rascal and Gary Barlow.

Annie Mac will be counting down through her Top 20 Hottest Records from the past 12 months, as voted for by the Radio 1 listeners, before revealing which track has earned the coveted title of Hottest Record Of The Year. Hypersonic Missiles by Sam Fender was crowned Hottest Record of the Year in 2019, beating the likes of Lizzo and Foals to the top spot.

Voting will close on Thursday, December 3.

BBC Radio 1 is introducing a brand new roster of DJs over the festive period. From Boxing Day until New Year’s Eve, Radio 1 will be showcasing the best in new and emerging talent and offering an opportunity to broadcast on the UK’s biggest youth radio station.

In the lead up to Christmas 1Xtra will be hosting a series of takeovers from some of the biggest names in Black music and entertainment. A different guest will take over 1Xtra every day between 6-7pm, giving listeners an insight into a variety of artists, their music choices and personality. Confirmed guests include HER, Ivorian Doll, Ghetts, Big Zuu, Deno, Ray Blk and more to be announced.

Boxing Day is all about new voices on 1Xtra and the day will be dedicated to the hottest new and emerging talent.

In this hour-long festive-first, global music icon Dolly Parton (in Nashville) talks to Claudia Winkleman (in London) about her life, career and loves, as seen through her memories of Christmas. And she’ll be chatting about the story behind and playing tracks from her new album, A Holly Dolly Christmas.

Annie Nightingale talks to friend and fellow trailblazer Zoe Ball in a warm, humorous and entertaining trip through an incredible career. Along the way they pick key tracks from the musical library of a British female broadcasting pioneer.

Gary Davies counts down the chart of the most played Christmas songs of this millennium so far, since 2000.

The Muppets at Christmas: It's Time To Play The Music

A specially extended version of Radio 2’s celebration of Bob Harris’ 50 years in broadcasting. Greg James talks in depth to the master craftsman about his life, influences and passions and constant search for the next big thing.

For this special Sounds of the 70s show the tables are turned on Johnnie Walker. Instead of being the interviewer, he becomes interviewee as his wife Tiggy Walker quizzes him about his own 1970’s and gets him to reveal his favourite tracks of the decade.

Gary Barlow – We Write The Songs

Gary Barlow’s series with some of the world’s most exciting songwriters continues with Barry Gibb.

Toni Braxton is back on Radio 2 this Christmas after making her debut guest presenting Sounds of the 90s. She’ll be playing the best of R&B from the last 50 years from the likes of Destiny’s Child, Marvin Gaye and Usher.

Claire, Faye, Lisa, Lee and H pick their favourite party songs and uplifting showstoppers as they talk about their goals and what they are looking forward to in 2021.

Jools Holland looks back over nearly 25 years of his annual TV Hootenanny and shares some of his favourite performances from the show.

Sophie Ellis-Bextor spent Lockdown entertaining thousands of viewers on social media with live sets from her child-filled kitchen. Here she returns with another Kitchen Disco for Radio 2.

Scott Mills celebrates the career of Steve Mac – one of the UK's most successful songwriters and producers of the past 30 years.

In the year where his seminal album, Timeless, celebrates its 25th birthday, the drum‘n’bass pioneer will be playing music from his vast record collection.

Goldie selects one of his favourite DJs, Digital, to provide a 60-minute music mix.

Goldie selects 3D from Massive Attack on First Time With... from the 6 Music archives.

Following her performance at the 6 Music Festival in Camden back in March, 6 Music invites Ro?isi?n Murphy to select some musical gems and new discoveries from her record collection.

Ro?isi?n Murphy passes the baton over to Hot Chip for an hour of their dancefloor favourites.

Roisin Murphy selects her own choice of programme from the vast 6 Music archives.

Christine And The Queens

Christine And The Queens takes over 6 Music with musical favourites, new discoveries and the odd festive treat.

Christine and the Queens artist mix

Christine And The Queens selects one of her favourite artists to provide a 60-minute music mix for 6 Music listeners.

Christine And The Queens selects her own choice of programme from the vast 6 Music archives.

In a year that saw him scoop the Mercury Music Prize, Michael Kiwanuka takes over 6 Music for a Christmas Eve show.

Iggy Pop serves up a festive sonic cocktail for listeners on Christmas Day.

Iggy Pop selects Billy Nomates to play an hour of her favourite tunes.

Robyn makes her 6 Music presenting debut by taking listeners on a cosmic trip through two hours of massive tunes this New Year’s Eve.

Beastie Boys make their 6 Music presenting debut on New Year’s Day. Adam Horovitz (Ad-Rock) and Michael Diamond (Mike D) will be kicking off 2021 with a special show that showcases their influences, personal favourite songs, old and new, tracks they have sampled and some deeper catalogue Beastie Boys tracks and remixes.