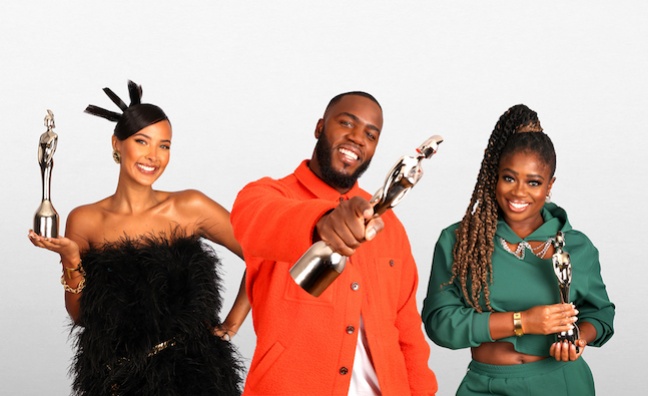 Music Week can reveal that the awards ceremony at the O2 Arena will drop its gender-based awards categories in 2022. Instead of the four male and female awards for UK and international acts, the BRITs will move forward with two categories - Artist of the Year and International Artist Of The Year.

The decision follows increasing pressure to drop the gender-based categories, including from former BRITs winner Sam Smith, who identifies as non-binary. The gender categories meant that Sam Smith was excluded from those awards categories earlier this year.

The BRITs has followed the example of other big music ceremonies - including the Grammys in 2012 and the MTV VMAs in 2017 - in dropping separate male and female categories.

The BRIT Awards with Mastercard will return for its 42nd show on Tuesday, February 8, 2022. Organisers have revealed a raft of plans and changes to the show.

Under the leadership of a new chair, Polydor co-president Tom March, the 2022 show is set to embrace a number of changes. Each aspect of the show has been closely looked at by the new chair in collaboration with the BRITs Committee.

Three main changes include the dropping of gender categories, the addition of four genre categories and BRITs recognition for featured artists.

The move was described as “celebrating artists solely for their music and work, rather than how they choose to identify or as others may see them, as part of The BRITs’ commitment to evolving the show to be as inclusive and as relevant as possible”.

Music fans will this year get to play an even bigger part in The BRITs with the introduction of four new genre awards, all of which will go to public vote to decide upon each category winner. These new awards will be: Alternative/Rock Act, Hip-Hop/Grime/Rap Act, Dance Act and Pop/R&B Act.

Organisers said the awards will “showcase the range of music styles that have produced some of the UK’s best loved artists, and demonstrate the diverse cultural melting pot that British music is known for”.

In further recognition of the array of artists contributing to the last 12 months in music, the BRITs in 2022 will include featured artists in Song Of The Year (previously called Best British Single). It makes more artists who contributed to a song’s success eligible for the BRITs. Previously only the lead artists or named collaborators have been counted as nominees.

At this year's BRITs, featured artists on tracks nominated for Best British Single included AJ Tracey & Stormzy on Headie One’s Ain’t It Different, MNEK on Joel Corry’s Head & Heart, KSI on Nathan Dawe’s Lighter, Raye on Regard’s Secrets, DTG on S1mba’s Rover and Headie One on Don’t Rush by Young T & Bugsey. While those songs were all up for the award, none of those featured artists were recognised as BRITs nominees.

The BRITs in 2022 will also celebrate the Producer Of The Year and Songwriter Of The Year, honorary awards that are decided upon by the BRITs Committee.

The full category list for 2022 will be as follows:

Group of the Year

Song of the Year with Mastercard

Mastercard Album of the Year

International Artist of the Year

International Group of the Year

Tom March, BRITs chair and co-president of Polydor Records, said: “It is important that The BRITs continue to evolve and aim to be as inclusive as possible. It feels completely the right time to celebrate the achievements of artists for the music that they create, and the work that they do, irrespective of gender. I'm really excited to launch four new genre awards, which create even more opportunities for artists to be acknowledged for the brilliant music they create and produce, and give music fans the chance to get involved and vote to support their artists and help them to win a BRIT. The 2022 show is shaping up really well, Mo is going to be an excellent host and I am thankful to him along with Clara and Maya for being part of this year's BRITs."

Geoff Taylor, chief executive, BPI and BRIT Awards, said: “The BRIT Awards are not just a celebration of British music, they are a reflection of British culture. The changes we are making for the 2022 show should mean more new fans, more engagement and a bigger global platform than ever for our amazing artists.”

MJ Olaore, chief operating officer BPI, added:  “One of the things we all love most about The BRIT Awards is that they always stay in tune with the times, remaining relevant to both the artists and our audience.”

The BRITs has also confirmed the presenter line-up for next year following the departure of Jack Whitehall.

Mo Gilligan said: “It’s an absolute privilege to host the 2022 BRIT Awards. I’m truly honoured to be asked. We’re already in the extensive planning stages and all I can say is, I promise we’re going to give it all we’ve got to create an incredible night for music fans everywhere. Let’s go!”

Clara Amfo and Maya Jama will once again come together to take on presenting duties for the BRITs. They are set to return to announce the 2022 nominations as part of a primetime ITV broadcast, The BRITs Are Coming, in December, and will present the celebrity arrivals coverage as part of the 2022 BRITs Red Carpet show on ITV2 and ITV Hub on the night of the awards.

Clara Amfo said: “It is such an honour and pleasure to be part of The BRITs presenting team for 2022. The spirit of celebration from the artists to the viewers is really special and I’m so excited for everyone to see more memories being made on the red carpet and stage in February!”

Maya Jama said: “I am so excited to be back on presenting duties for the BRITs 2022! I remember watching the show growing up and still can’t quite believe I get to be a part of it. The BRITs Are Coming TV special on ITV has always been one of my favourite shows, it’s such a big celebration, everyone is on top form and I love seeing so many of my favourite people within the music industry come together for such an incredible night.”

The main eligibility window for the categories (except Rising Star), and all awards as decided upon by The BRITs Voting Academy, runs from January 1 to Thursday, December, 9 2021. The BRITs Voting Academy is made up of approximately 1,200 music industry experts across media, artists, labels, publishers, promoters, retailers and more, and is refreshed annually to ensure the voters are as diverse and representative as possible.

For the annual BRITs Rising Star award, voting is open now until Friday, November 26 to an invited panel of music editors and critics from the national press, online music editors, heads of music at major radio and music TV stations plus songwriters, producers and live bookers.

This year's digital music partner is YouTube Music, the home of the official livestream for global viewers. In a BRITs first, fans will also be able to watch exclusive behind-the-scenes footage on the night on YouTube Shorts, as well as listening to artists' playlists on YouTube Music.

Dan Chalmers, director of YouTube Music, EMEA, said: “We are proud to be the official digital music partner for what will go down as a seminal year in BRITs history.  Today's fans are hungry to enjoy music in different ways - live-streaming, playlists, short form video - with Shorts, the newest addition to the platform, we will take The BRITs to the next level.  Celebrating the best of British talent is what we do day in, day out at YouTube and we're thrilled to partner for the new category for Artist of the Year.”

A makeover of the show creative will come courtesy of Block9, the team behind this year’s Glastonbury - Live at Worthy Farm, Gorillaz: Song Machine, Live From Kong, Banksy’s Dismaland and NYC Downlow, the nightlife institution seen annually at Glastonbury.

Mastercard continues their long-time partnership with the BRITs for the 24th year.

The BRITs will continue to be exclusively broadcast on ITV for the 29th year. The O2 arena will once again host the BRITs going into its 12th year.

Katie Rawcliffe, ITV head of entertainment commissioning, said: “We’re hugely excited to be welcoming The BRIT Awards back to ITV screens in 2022. Mo has already proved really popular amongst ITV audiences since joining The Masked Singer and we look forward to this new era for the awards with Mo, Maya and Clara at the helm.”