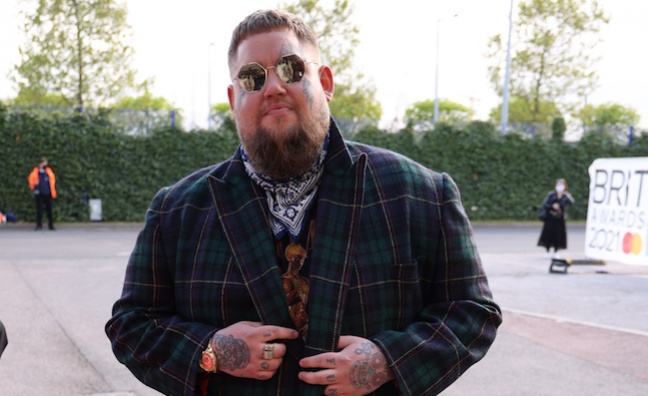 Rag’N’Bone Man has landed his second No.1 album, as well as being one of several artists to register a sales boost following their BRITs performances.

The ceremony was staged on Tuesday (May 11) in front of a live audience at The O2, which left two days of chart sales for the BRITs to have an impact for the artists involved this year.

Even before the BRITs, Rag’N’Bone Man was already on course for No.1 with Life By Misadventure (Columbia). The album racked up a further 6,000 physical sales following the awards show and finished on 41,855 (including 33,031 physical and 2,830 streams), according to the Official Charts Company. The former Music Week cover star narrowly missed out on being 2021’s fastest seller to date, as fellow Columbia act Foo Fighters moved 42,486 copies earlier this year.

While it’s impossible to measure any week-on-week BRITs boost for Life By Misadventure, it’s clear that the televised ceremony worked its magic for Rag’N’Bone Man. The Pink collaboration Anywhere Away From Here  – which the pair performed with the Lewisham & Greenwich NHS Choir – climbed 22 places to No.9 with sales up 97.1% week-on-week. The single amassed 2,265,457 audio and video streams in the past week.

With 8,511 sales, Anywhere Away From Here was the week’s biggest download. Proceeds from the new version of the single, released immediately after their show-closing performance, go to NHS Charities. Further down the albums chart, Pink’s Greatest Hits –  So Far (RCA) moved 100-71 with sales up 16.5% week-on-week (total sales 1,199,531). Pink’s single All I Know So Far debuted at No.45.

Elsewhere on the singles chart, Parlophone-signed Coldplay – who opened the BRITs show – had the highest new entry at No.12 with Higher Power (24,011 sales). It’s the band’s highest charting single since 2017’s Chainsmokers collaboration Something Just Like This, which peaked at No.2.

Fellow BRITs performer Olivia Rodrigo saw her single Drivers License (Polydor) rebound 43-40 with sales up 7.8% week-on-week. The former No.1 is now on 854,023 sales.

British Breakthrough star Arlo Parks’ album Collapsed In Sunbeams’ (Transgressive/PIAS) returned to the charts at No.62 with OCC sales – up 92.9% week-on-week. It has sales to date of 30,517.

Some non-performers also registered a BRITs boost. Little Mix made history by winning the Best Group award and their Confetti album (RCA) climbs 28-23 with sales up 2.9% week-on-week to 2,854. The album has now sold 179,530.

Phil Halliday, managing director at HMV and Fopp, said: “Little Mix’s Confetti proved to be a huge hit over Christmas and into the new year, and thanks to the BRITs the band are attracting new fans in their thousands.

“Elton John and Olly Alexander’s performance clearly struck a chord with viewers, who’ve been buying up best-of albums in their droves.

“Each year we see the BRITs introduce new music to viewers who might not have thought to try out a certain genre or artist before, and this year we’ve seen a particularly big leap in sales for the winning acts and performers.”