Chris Price on why Radio 1 matters most for new music 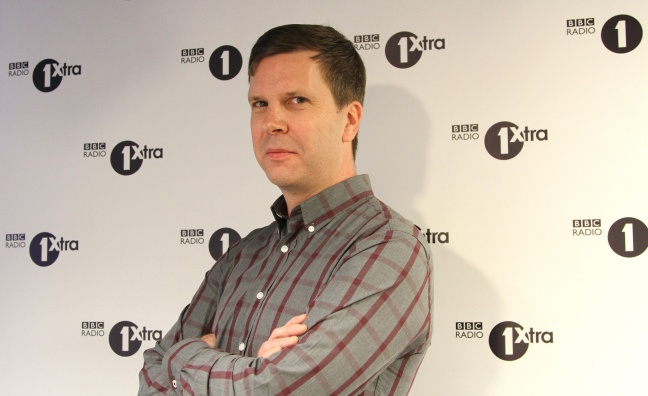 Chris Price has said that radio offers a stronger connection to new music than any other medium, as BBC Radio 1 unveils the latest additions to its Brit List.

Price said that the list of acts the Brit List has supported since its 2017 inception – which now stretches beyond 30 artists – shows that the station is a key source of music discovery in the UK.

“We’ve got a really good, long and growing list of success stories, with very few clangers,” Radio 1’s head of music told us. “I feel we’ve really hit our stride and we’re fulfilling the original promise we dreamt up four years ago, it was about breaking artists.”

“We were looking at the market back then and realised how difficult it is to do that, especially through one platform alone,” he continued. “We wanted to lead by example and be the first radio station on the planet to make a three song commitment to an artist, to tell an artist that we’re going to playlist their next three songs. We’re really delivering on that promise, across TV now as well as radio.”

We’ve got a long and growing list of success stories, with very few clangers

Looking back at recent Brit List additions, Price said: “Griff won the BRITs Rising Star award and Tion Wayne has had a huge No.1 record, the first drill record to go to No.1. We’re delighted about those two, chuffed to bits.”

Price said that Alfie Templeman has been considered for the Brit List previously, having enjoyed BBC Introducing support and previous plays on the station from Jack Saunders, Annie Mac and Greg James.

Mimi Webb has taken a different route, achieving viral success on TikTok and signing to RCA. Price said that Webb represents the first such act to receive Brit List support.

Here, we sit down with Radio 1’s head of music to talk emerging artists, the magic of new music and why the Brit List is vitally important to the music industry.

Why did you choose to get behind Alfie and Mimi now?

Alfie is somebody we’ve been supporting for quite some time, going all the way back to a first play on Huw Stephens’ show in 2018. He is a great Radio 1 specialist story. One of the big things we’re learning with Brit List is that timing is everything. It’s a big commitment, three singles on the A List, a Live Lounge, a Big Weekend performance and now, a TV debut, so you want to really make sure the a artists are ready to capitalise. If you go too early, sometimes they’re not ready, and if you go too late then we’re not adding very much to their campaign, it’s about getting the timing exactly right. Mimi is a different kind of artist, probably a little bit newer to us than Alfie. There’s no specialist story, she’s not that type of artist. She was first played by Mollie King on Best New Pop, and also has a really strong BBC Introducing story, coming from Kent, which is Abbie McCarthy’s show. It’s a perfect storm of BBC Introducing support and TikTok virality and that has been a really powerful combination. Mimi went viral on TikTok sharing a video of her first play on BBC Introducing. It’s a very 2021 kind of story.”

As music discovery changes, how does Radio 1 adapt and know how to sniff out new talent?

“In the same way artists do – by constantly evolving. We are evolving the way in which we identify, discover, nurture and break talent. One of the key ways of doing that is making sure we have the right people in the room when we are making our playlist decisions every Tuesday afternoon. It’s the same team who make the Brit List decisions. We have genre and subject matter experts in the room, but we also have a social media expert and someone from our visualisation team who can bring expertise from that side. That’s really helped us. As far as TikTok goes, there are dozens if not hundreds of stories we could pick from every week, but being an artist-first radio station, we’re always going to err on the side of those stories and try and get behind them, especially if there’s an Introducing and a Radio 1 backstory too.”

With the recent schedule changes and the departure of Annie Mac, how will the station’s new music curation evolve?

“Annie has been a force of nature when it comes to music discovery at Radio 1 and of course we’ll miss her. But one of the things we’re proudest of is that we’ve got a constant stream of amazing new talent coming through, whether that’s Jack Saunders having a more prominent position in the schedule breaking artists in the evenings, bringing Clara Amfo into specialist and allowing her to flex her music discovery muscles, or newer talent like Sian Eleri. We’ve become very adept over 50+ years of bringing talent through to keep the best tastemakers making the right decisions, helping break artists and helping audiences discover their new favourites.”

How can you sum up the importance of Radio 1’s role to the industry and artists, why do your DJs matter?

“It’s really important. The role of the DJ, broadcaster or presenter has evolved. Let’s face it, there are plenty of ways to discover music now, but what sets radio apart is storytelling, placing context around new artists and giving listeners a chance to fall in love with it. That’s what creates meaningful connections between new artists and our listeners. It’s one thing to offer people the chance to skip through new music on a playlist at their will, but what radio presenters do uniquely well is turn listeners into fans. And it’s fans who are invested in all aspects of what an artist does, music, tickets, merch… that true connection. At the end of the day, radio is still the most human medium out there, isn’t it? And music discovery is a human thing.”