'Continuity is important at this crucial time': Nicky Morgan stays as Culture Secretary for now 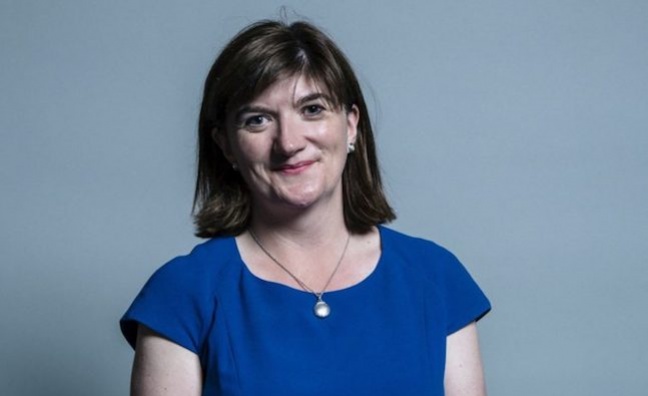 Less than six months after the last announcement of a new Culture Secretary, Music Week was primed for a new appointment.

Following Boris Johnson’s big win in the general election, a vacancy appeared to have been created for the Culture job as the incumbent Nicky Morgan had stepped down as an MP. But in a surprise move, Morgan has been given a peerage and remains in the DCMS hot seat.

“Well, it turns out the leaving the Cabinet is harder than leaving the EU!” she joked on Twitter.

The music industry would have been hoping for a long-term fixture at the Department for Digital, Culture, Media and Sport, which has seen seven Secretaries Of State since 2014.

“Nicky Morgan’s reappointment as Secretary of State for DCMS is great news for the music industry,” said UK Music CEO Michael Dugher. “She has been excellent in the role and is a real friend of UK Music. Continuity is important at this crucial time and we wish her every success as well as congratulating her on her peerage."

Ahead of the appointment, there was a suggestion in the media that music-friendly former Culture Secretary John Whittingdale would be back.

Morgan’s high-profile media appearances during the election campaign should perhaps have been a clue that she might retain her Cabinet role. However, she has told the FT that she only expects to remain in the cabinet position until a more extensive reshuffle after the UK has left the EU on January 31.

Opposition MPs have been quick to decry the move to allow Morgan to continue in the job from the House Of Lords, an unusual political arrangement for a cabinet minister in modern times. There is also speculation that her temporary role signals a major government reorganisation that will involve DCMS next year.

Well it turns out that leaving the Cabinet is harder than leaving the EU! Am delighted to continue as @DCMS Secretary of State as the PM focuses on delivering our mandate in the vital first weeks of this new Government

Helpfully for the Culture Secretary, the music industry has already outlined its priorities for the biz, including a robust copyright regime, support for small venues and retailers and music education.

There is media speculation that the government will look at the future of the BBC licence fee. That could put it at odds with the music industry, which clearly values the broadcaster’s multiple TV, radio and online platforms for artists.

The post-Brexit arrangements with the EU will also be a key issue. While the DCMS won’t be responsible for Brexit, the music industry will be hoping the minister stands up for the sector.

“We've got to ensure that we can get artists into the country and we've got to ensure that our artists are able to go and tour across the EU without costly bureaucracy,” said UK Music CEO Michael Dugher earlier this month. “This is how they’re building audiences and, frankly, paying the bills. [Brexit] won’t affect the global superstars, the Ed Sheerans, who are booking tours months in advance and have got lots of resources and lawyers and are able to manage this, but it will affect the vast majority of artists – and they’re the people that we've got to look after.”

DCMS has been working on a music strategy for 2020 that will cut across government departments.

It’s likely that Nigel Adams, Minister for Sport, Media and Creative Industries, will be a key figure for the music business, as well as being point man in the House Of Commons. He has been a familiar face at industry events both before and since his appointment.